He's not quite the first seven-foot footballer on an AFL list but Mate Colina will become the game's tallest player if he manages to play a senior match with Richmond after the Tigers signed the basketballer as a category B rookie.

The cousin of emerging defender Noah Balta and another protege of "big" Ivan Maric, Colina stands 213 centimetres' tall at the University of Hawaii where he plays hoops while studying human development and family studies, two centimetres taller than Collingwood's Mason Cox and retired Docker Aaron Sandilands. 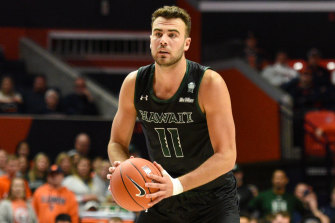 University of Hawaii centre Mate Colina has signed with Richmond as a category B rookie.Credit:Getty Images

"It's probably his running ability that has stood out more than anything in his time with us."

During his time in Melbourne recently Colina did a training block with premiership midfielder Shane Edwards and has done some running in his own time with athletics coach Bohdan Babijczuk.

Speaking from Hawaii, he said he chose Richmond because of his connections there, which not only includes Balta but also ruck coach and mentor Maric, a person Colina clearly admires.

"I am not sure I have met a better bloke," Colina said.

It was around 2015 when Colina decided his future lay in basketball attending the Australian Institute of Sport and representing Australia overseas at junior level.

At that point he was representing the Eastern District League and had come to the attention of Calder Cannon and Vic Metro talent scouts, but threw his lot in with basketball after playing in a losing junior grand final with Doutta Stars where Balta and Lions forward Cam Rayner played.

"That was devastating," Colina said of the loss.

In Canberra he met Brisbane Lions ruckman Tom Fullarton, who switched from basketball and this year made his debut with the Lions in round 15, and they have remained friends, with the pair representing Australia in China and Europe.

His height is obvious but Colina knows he will require more to succeed in the AFL.

"For me it's not all about the height," Colina said.

"I see myself as a competitor and want to be seen as someone who is coachable and will leave a legacy at the club."

It's a lofty ambition but not unrealistic as he has elite running capacity and knows how to handle a football with a Sherrin alongside him in Hawaii where he plays in the NCAA.

That's where his attention is now but the prospect of playing with the Tigers has him jumping.

"I get to go into an elite environment on the summer break but right now I have a laser focus on getting my degree completed and I am fortunate enough to be playing two great sports that I love," Colina said.

Right now it's basketballl in the NCAA for the University of Hawaii. Soon enough it might be footy with the Tigers at the MCG, as tall as a light tower, as competitive as a Maric. It's an enticing mix.

September 10, 2020 Rugby League Comments Off on AFL’s next big thing? The new Tiger who could top them all
NFL News