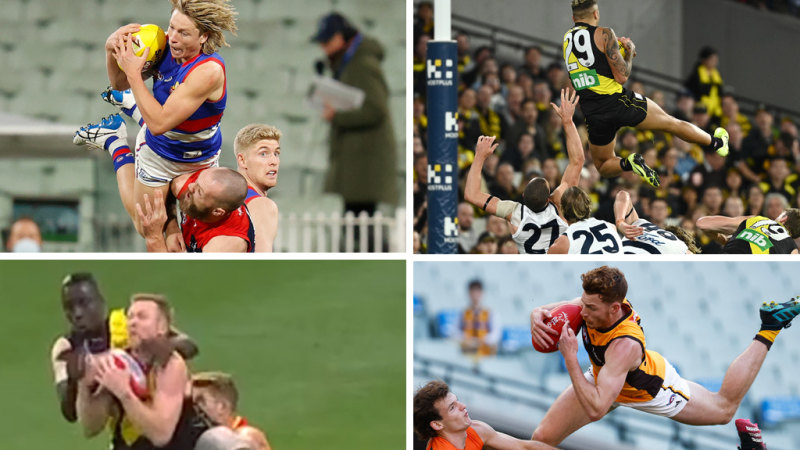 One of the most flamboyant forwards in VFL-AFL history says Isaac Heeney deserves to win this year’s mark of the year but a man considered one of the sport’s most courageous insists Jack Riewoldt deserves the honour.

In a season filled with spectacular marks, Warwick Capper says he has joked with Isaac Heeney that he is the “poor man’s Warwick Capper” but the young Swan could soon have something in common with the 1980s high-flyer – claiming the mark of the year.

Capper has long had a strong affinity with Heeney since declaring him “the next blonde superstar for the Swans” in 2014.

And he could not have been prouder when Heeney flew over Fremantle’s Luke Ryan at Metricon Stadium on Sunday, his left shin sitting on the Docker’s shoulders, in what shapes as one of the top five grabs of the season.

That it came on the same weekend as Western Bulldog Cody Weightman’s hanger over Max Gawn at the MCG makes for an intriguing public vote – closing on Thursday – as to who will claim mark of the week. However, the man overlooked will almost certainly be included as one of five added marks to the 23 weekly winners announced at the end of the season by AFL Media. 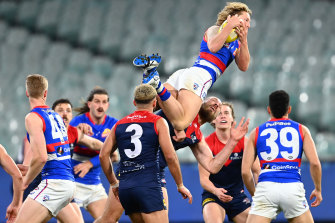 Heeney and Weightman join Shai Bolton’s stunning leap over Mark Blicavs at the MCG in round eight, Jack Riewoldt’s courageous grab running into traffic against Adelaide in round 11 at the Sydney showgrounds, and Tim O’Brien’s Superman-style grab against Greater Western Sydney in round 15, also at the MCG.

Capper, the 1987 mark-of-the-year winner when he used Hawk Chris Langford as his stepladder in the qualifying final and marked while lying on his side, said Heeney deserved to win this year – unless there is an even more spectacular offering in the final month of the home-and-away campaign.

“It reminded me of myself at training,” Capper joked.

“I was like: ‘Is that me or is that Isaac?’ Just reminded me of myself, sticky fingers, one grab all the way down.”

Capper, who says he missed out on winning a car in ’87 because the ABC had the TV rights but still cashed a cheque, enjoys watching the exciting Heeney play.

“I ring him sometimes and call him a poor man ‘s Warwick Capper – he hasn’t kicked 100 yet or been in the (Swans’) hall of fame,” the jovial Capper added. 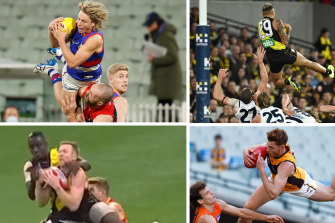 However, he did admit the Riewoldt and O’Brien marks would win the “most courageous” award.

Carlton great Ken Hunter, one of the most fearless players the game has seen and a man who is now dealing with the mental health fall-out of repeated head knocks, said Riewoldt deserved to win this year.

“For two reasons – going back into the unknown on the footy field is the ultimate challenge for any footballer, and the most crazy and dangerous,” he said.

“But then to be able to take the actual mark that had a really high degree of difficulty to complete was for mine one of the better marks I have ever seen.”

Hunter was the 1983 winner, collecting a Holden Commodore SLX, after completing an overhead mark running into a pack against Richmond at Princes Park,

High-flyer Jeremy Howe, who claimed the honours in 2012 but was left stunned in 2017 when Joe Daniher beat him, last month told The Age Riewoldt had been the best of the then three serious contenders.

The league’s game analysis committee will select the best three marks once the season is done. The winner, chosen by the committee (counted as 10 votes) in conjunction with public voting (counted as one vote), is presented a cheque – well short of the value of Hunter’s 1983 Commodore – during the Brownlow Medal count.

There has been controversy over the years, including the Howe call and when Andrew Walker was overlooked in favour of Andrew Krakouer in 2011. There is also likely to be heated debate this year.

Inexplicably, Bolton did not win mark of the week, for Collingwood’s social media accounts rallied supporters to vote on the league’s website for Magpie forward Mihocek’s flying grab over North Melbourne’s Ben McKay. That decision sparked more debate as to whether there should be an AFL-appointed panel which judges the weekly candidates.

Bolton’s mark will also be added to the five nominated contenders at the end of the season. So good was his grab that it prompted Blicavs to later declare the Tiger had the award in the bag, and joked: ”I look forward to being on an AFL card and, hopefully, I get some royalties out of it.” 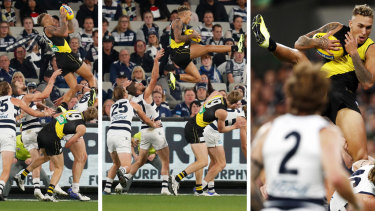 O’Brien’s was also courageous, and he later said his first thought was about survival when he flew over Giant Jack Buckley and Hawks teammate Luke Breust.

Weightman said it had probably been “a bit silly” to try and climb over Gawn – but the Bulldogs’ small forward is surely glad he did.

For Gawn and Blicavs, they are facing the unfortunate happenstance of twice being the ladder which led to the mark of the year. Blicavs had West Coast’s Nic Naitanui do the honours in 2015, while fellow Eagle Liam Ryan used Gawn as his springboard in 2019.

Keep up to date with the best AFL coverage in the country. Sign up for the Real Footy newsletter

July 26, 2021 Rugby League Comments Off on AFL mark of the year battle rises to another level
NFL News