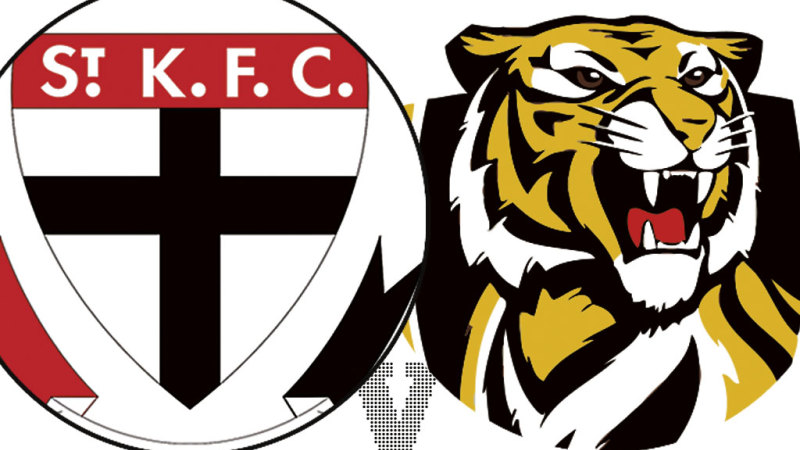 We have two late changes to tonight’s teams with St Kilda losing running midfielder Zak Jones and ruckman Rowan Marshall who have been replaced by Luke Dunstan and Paul Hunter.

The medical subs for tonight are Ben Long (Saints) and Jack Ross (Tigers).

‘Hopefully he gets a cold’: Ross an option as Saints consider how to stop Martin

St Kilda coach Brett Ratten has left the door ajar for the Saints to apply a hard tag to Richmond superstar Dustin Martin in Thursday night’s date with the Tigers at Marvel Stadium.

Ratten joked that the best way to stop the Brownlow medallist was for him to get a cold, before suggesting more seriously that St Kilda could employ a lockdown player to curb the Richmond great’s influence. 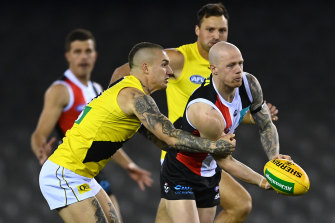 Martin has started the season outstandingly, notching 13 score assists through four rounds. No AFL player had recorded more through the opening four rounds of a season since Chance Bateman’s 14 in 2009.

Martin was dominant in Richmond’s semi-final win over the Saints last October, notching 25 disposals, 10 clearances and a goal.

Rattten hinted that dual best and fairest Seb Ross could be the man sent to Martin.

G’day everyone! I’m Roy Ward and welcome to tonight’s AFL live blog as we begin round five with the clash between a resurgent St Kilda Saints and reigning premiers Richmond Tigers from Marvel Stadium.

The two clubs will continue their tradition of deeming this ‘Maddie’s Match’ in memory of Maddie Riewoldt, the sister of Nick and cousin of Jack, who died from complications from bone marrow failure in 2015 with her foundation, Maddie Riewoldt’s Vision, continuing to raise money to find new ways to treat Bone Marrow Failure syndrome.

We have a great match ahead of us, please feel free to leave a comment on the blog and enjoy the evening to come.