Gary Ablett entered the game not knowing if this preliminary final would his last or second game, whether his team would be able to make his finale a grand one and potentially a premiership.

Ablett isn't the uber player of five years ago. At 35, his role isn't to count his possessions, but to make them count, to ensure that every touch has import and that a number inflict grievous harm on the opposition.

We wondered whether the Cats would complete the fairytale for their prodigal son champion; whether Geelong had sufficient energy, poise and fire to overcome the Lions at a raucous Gabba. 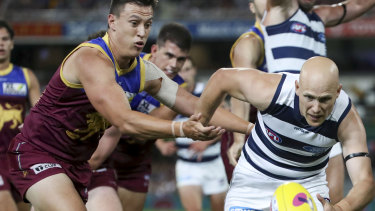 But, in a twist that seemed providential – written by the footy gods for one of their greatest – it was this ageing, slowed-down version of the astonishing Ablett that delivered the two heaviest blows for Geelong and against the Lions.

It was the sublime intervention of Ablett – two goals in several minutes in the third quarter – that propelled the Cats on the path to their first grand final since 2011 and a date with the AFL's benchmark club, Richmond, at this same venue in seven days.

The Cats led by 10 points, early in the third quarter when Sam Simpson booted the ball untidily forward to a contest within 15 metres of goal, where Patrick Dangerfield was stationed.

The footy went to ground. Dangerfield burrowed in and grabbed it, but was wrapped up in a tackle.
Ablett lurked in front of him. Dangerfield shovelled the ball out to him, in what the replay showed – much to the outrage of the Gabba throng – to be a disposal more befitting Cameron Smith than an AFL player.

It happened so rapidly that the umpire wouldn't have seen Dangerfield's throw. But it was overshadowed by the genius that followed: Ablett, sizing up the goal from an angle, dribbled a low trajectory right foot snap, in which he never lost his balance.

You could feel the deflation in the Brisbane crowd, and the elation among the Cats.

The Lions replied with a long bomb to Cameron Rayner. They were still threatening.

Then, at the next bounce, a clean clearance saw Mitch Duncan hand ball deftly to Ablett in space inside the centre square.

Ablett might have slowed, but his spatial awareness and nous have not dimmed. As soon as he had this ball, one could sense what was coming, since he's done it before so many times.

He sprinted clear, past the centre square and to about 52 metres, unloading with a long drop punt. It sailed towards goal, where Tom Hawkins shepherded and then his celebration confirmed the goal.
Ablett had struck, twice.

He wasn't Geelong's best, or most influential. Others, such as Duncan, Sam Menegola and Dangerfield had more disposals, others performed crucial defensive roles – Tom Stewart and Jake Kolodjashnij for instance (the latter subduing Charlie Cameron after conceding two electric goals).

Hawkins was structurally crucial, as ever, even though his opponent Harris Andrews was very effective, too and among the better Lions. Rhys Stanley was excellent in the ruck.

Ablett's main match-up was Daniel Rich, in what was, in retrospect, a risque move – Rich is an offensive defender, rather than a close-checking type small backman. He gave Gaz too much latitude.

Collectively, the Cats were superior defensively, offensively and in the contest, where they doubled the Lions (36-18) in the first quarter. They were stronger and more composed with the ball.

But, in a final that was tight and up for grabs until late in the third quarter or early in the last, a preliminary final in which the Cats took a long time to turn ownership of general play into scoreboard advantage, Ablett took his chances.

He wasn't the best or biggest player in Geelong's triumph. Undoubtedly, he was the best story.

He's not done with yet.

And, in a season like no other, his first and last AFL club, the Cats, will give him and their coach Chris Scott, an opportunity to create history.

October 17, 2020 Rugby League Comments Off on Ablett delivers the biggest blows when it matters most
NFL News