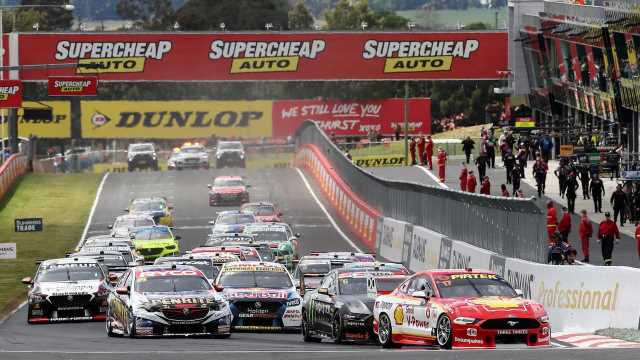 Kayo Freebies will launch later this month and will be available to stream online through kayosports.com.au and the Kayo Sports app with its first live Freebie one of Australia’s most iconic Supercars races, the Mt Panorama 500 starting February 26.

Selected A-League and W-League games will also be available as Kayo Freebies with more Kayo Freebies announced in the coming weeks.

Kayo Freebies are free, and no credit card details are required to sign up and start streaming.

The Mt Panorama will launch the 2021 Supercars Championship and Kayo Freebies.Source:News Corp Australia

“Kayo has experienced massive subscriber growth over the past two years and is now established as the go-to destination for streaming 50 sports live,” he said. “We have the biggest line-up of sport from the world’s best producers including FOX SPORTS, BEGIN SPORTS and ESPN, and we are seeing our customer base continue to grow with record audiences for our AFL, NRL, Cricket and motorsport coverage.

“Kayo Freebies is another game-changing moment. We believe Kayo Freebies will increase our audience share for selected events, expand audiences for growing sports and ultimately take Kayo’s subscription growth to the next level.”

The Central Coast Mariners are on top of the A-League table right now.Source:Getty Images

Mr Ogrin added: “Kayo is the unrivalled service for streaming the world’s best sport. We know when people try Kayo, they love the experience. Freebies is a way of bringing even more sports fans closer to our brand, enjoying the best commentators and production, and experiencing our technology which has been built specifically for streaming live sport.”

The first event to get the Kayo Freebie treatment is the Supercars Championship’s season opening event at Bathurst, the Mt Panorama 500.

It’s a new era for the Supercars Championship with Holden’s retirement from the sport as well as Team Penske, who have had plenty of success in recent years, departing the sport after six years.

Three-time Supercars champion Scott McLaughlin has also left to tackle the IndyCar series in the US.

In that wake, Will Davison and Anton De Pasquale have earned call ups to the Dick Johnson Racing Team.

Cameron Waters will continue his long service with Tickford Racing in 2021, hoping to build on his drought-breaking win at The Bend as he claimed his second career victory in the penultimate race of the season.

He also edged out the Red Bull Racing pair of Shane van Gisbergen and Jamie Whincup for second behind McLaughlin.

Cam Waters wants to go one better in the Championship than last year.Source:Supplied

He’s looking forward to starting the year at Bathurst on February 26-28.

“It’s going to be different going there in February, obviously it’s going to be a lot hotter. The track temp is really critical there,” Waters told NewsCorp.

“When it’s cold it’s really fast and when it’s hot, it’s super greasy. So being the first event, I feel like there could be a few mistakes up there and a few crashes.

“So it will be really critical to get through that first event with some points and get onto the next one.

“It will be cool to go to Bathurst with that format and see what the racing is like and how we all handle it. I don’t think it will take anything away from the 1000 that’s for sure.

“It’s awesome Kayo are bringing out the freebies so you can watch Bathurst (500) without a subscription which is absolutely awesome and it will be the first of many.”