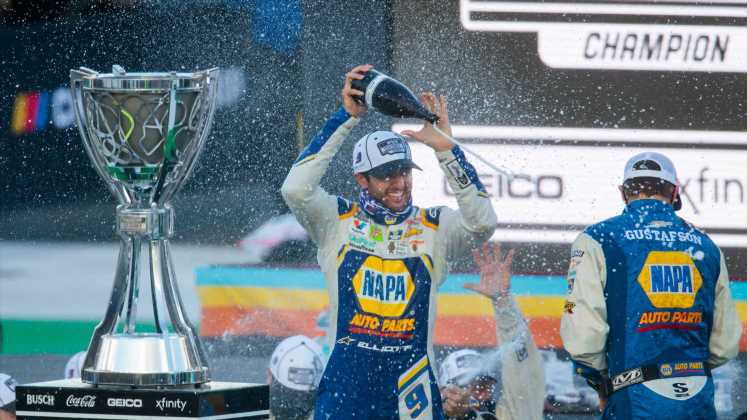 Chase Elliott’s reign as the NASCAR Cup Series defending champion begins this weekend at Daytona International Speedway, and he has a simple approach for an encore performance.

Elliott acknowledges his No. 9 Hendrick Motorsports team got hot when it mattered most last year. In late August, Elliott picked up his second win of the season on the Daytona road course to snag some additional bonus points, and then he won three of the final five races in the playoffs. The last two wins at Martinsville Speedway and Phoenix Raceway were dominant.

The sport’s most popular driver winning the championship was the perfect conclusion to a season like no other. But Elliott feels there is so much more for him, crew chief Alan Gustafson and the team “to go get.”

“I don’t think we are at our best in every category, which is really cool for me and something that I think our team should take a lot of pride in,” Elliott says. “To have the kind of result we had last year but also know that we can still improve in some pretty big ways is exciting. It should be for our team, and I know it is for me.

“I’m looking forward to cleaning up those areas that haven’t been so good, and also to make the ones that have been good better. I think we have to do that. Everyone else is going to be improving as always. We need to stay the course, keep doing our thing, keep being us and continue to improve in every area that we have been.”

It should come as no surprise that Elliott isn’t basking in the glory of his championship accomplishment. Possessing the wisdom of a veteran, Elliott is as straightforward as they come. Just as quickly as one race ends, his focus shifts to the next. Never caught up in his own press clippings, there have been times when Elliott’s self-criticism and honest answers were brutal to listen to.

Asked about capitalizing on the number of road courses on the schedule this season, Elliott waves it off. Yes, he’s been good with the left and right turns the last few seasons, but Elliott doesn’t see it as a given going forward.

“There’s not been one part of me that watched the schedule change, saw seven road courses, and thought, ‘Yeah, we got it now,’ ” he says.

Team owner Rick Hendrick already sees a difference in his latest champion. “It’s one of those things when you have a competitor in Chase that is calm and cool, he knows how to race, he takes care of the equipment, he can run fast, and he can lead laps,” he says. “But he is more confident in himself, and he and Alan are really clicking. I couldn’t believe the confidence level they had when they went to Martinsville. Alan said, ‘I’m going to win that race.’

“Then to go into Phoenix, when we had to start from the back, I talked to Chase, and I said, ‘Man, I’m sorry.’ He said, ‘Well, I get to pass more cars.’ The confidence level with Chase Elliott is unbelievable, and with Alan. They think they can win every week. Just let it come to you. (Dad Bill Elliott) is there talking to him, and he is just way more mature than his age.

2021SEASON: No shortage of storylines for top four Cup teams

A big part of the Elliott story in 2020 was rising to the occasion when it mattered most – when the team’s back was against the wall. Martinsville and Phoenix were those occasions, and unlike in years past when the moment seemed too big, or the team wasn’t able to perform when they had to, they did.

Doing more of that this season will go a long way in showing that Elliott and company are not who they once were. That his “just keep pushing” mentality equals continued results on the track.

“In any sport, it’s what have you done lately,” says Elliott. “I think about all the disrespect that Jimmie Johnson got toward the end of his career. It’s like everyone forgot about how great he is just because he had a bad race or a bad stretch of races.

“The lesson that taught me is that no matter what you do, if you have a bad stretch or don’t do well, then they’re going to come after you about whatever you’ve done recently.

“On the flip side of that, if you have a good run after being trashed for a year or something, everyone is going to be hyping you up, be excited for you, and jumping on the bandwagon. It’s all about performance and all about what you’ve done lately.