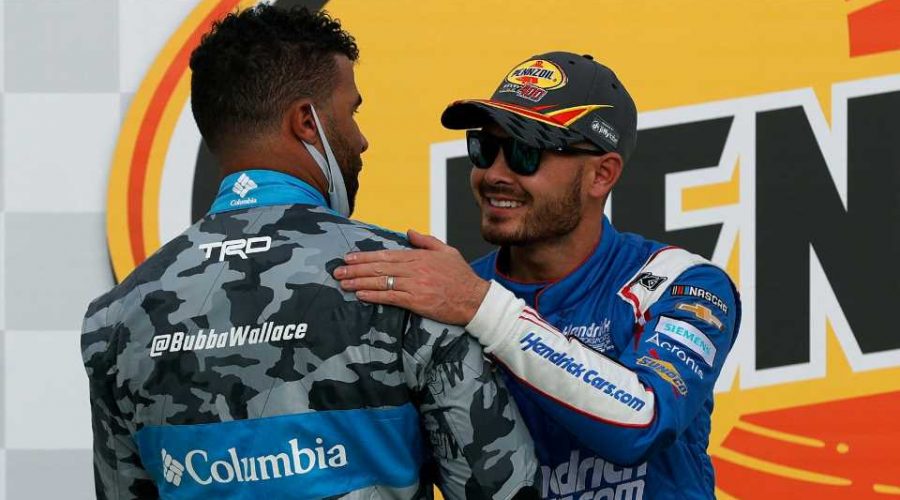 Bubba Wallace was one of the NASCAR Cup Series drivers to congratulate Kyle Larson right after Larson’s win in the Pennzoil 400 at Las Vegas Motor Speedway on Sunday. Eleven months ago, Wallace, the series’ lone Black driver, was responding to Larson’s utterance of the N-word during an online stream of an iRacing event.

“Proud and happy for (Larson),” Wallace tweeted early Monday. “Told him way to keep his head thru it all!”

“That was special and really cool for him to come by and take time out of his postrace where he could be on his way to the airport to go home,” Larson said in his postrace video call with reporters.

Larson apologized to Wallace last April for saying the word. Larson was in the midst of being fired by Chip Ganassi Racing and suspended by NASCAR.

“I am not mad at him, and I believe that he, along with most people deserve second chances,” Wallace wrote on Twitter at the time. Still, Wallace said, there was no “grey area” with regard to the slur.

“I told him it was too easy for him to use the word and that he has to do better and get it out of his vocabulary. There is no place for that word in this world,” Wallace wrote.

NASCAR reinstated Larson last October after it was satisfied he had he met its conditions for returning. Hendrick Motorsports signed him later in the month. He won in the No. 5 Chevrolet in his fourth race with the organization.

The win also earned a congratulatory tweet from Bill Lester, another NASCAR trailblazer. In 1999, Lester became the first Black driver to race in the Xfinity (then known as the Busch) Series. He was a regular in the Truck Series from 2002-07 and made two starts in the Cup Series in 2006.

“You got your second chance and absolutely made the most of it!” Lester tweeted.