Australian Formula One fans have had plenty to look out for in the past two decades, with both Mark Webber and Daniel Ricciardo winning Grands Prix and challenging for titles.

Webber is now retired, while Ricciardo is hoping that his switch to McLaren next season brings a change of fortune.

Who will be their successor on the F1 grid? If Melbourne youngster Oscar Piastri has any say, it will be him. 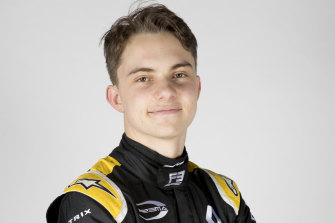 And, if he can continue on his current trajectory, the 19-year-old is well placed to make it to the top flight.

Piastri could, if things go well over the weekend at Mugello in Italy, clinch the Formula 3 championship, stamping himself as one of the sport's most talented up and comers.

The Victorian youngster, who drives for the Prema team, currently sits atop the standings with 160 points, eight clear of teammate Logan Sargeant. While the Prema pair look set to fight out the title, in theory another handful of drivers are in contention. 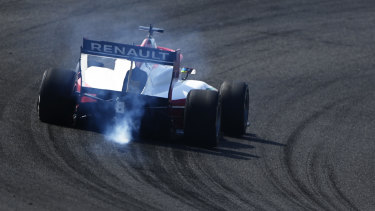 Oscar Piastri during qualifying for the F3 Championship at Mugello Circuit. Credit:Getty Images

Sixteen points further back is Theo Pourchaire in third, with Liam Lawson, David Beckmann and Frederik Vesti all chances of pushing their way to the top of the standings if the leaders have a nightmare weekend.

Piastri, who is based in the UK as part of the Renault driver academy, is living a racing mad teenager's dream. As he explains, motorsport has always been in the family, with dad Chris always keen on racing and determined to give his son a chance if he was interested and showed ability.

"I started racing remote control cars when I was about six, so long before any actual kind of motorsport," he said. "We met people through racing those and I had a go in a go-kart when I was about nine or 10, and a week after I had my first go I had my own go-kart and we went on from then.

"Both my pop and grandad are mechanics and they have always followed motorsport, and my dad's business was a car tuning company so he has always been massively into it. It was just unfortunate when he was much younger he didn't have the funding to do anything serious in motorsport.

"I got to grips with it reasonably quickly," Piastri continued. "Racing remote controlled cars helped with that as I had quite a lot of background knowledge on the racing lines, braking into corners, throttling out of corners, all the basics.

"Then I learned to do it in a go-kart. I got the hang of it pretty quickly but it took a couple of years to get to the really pointy end of karting in Australia."

Piastri moved to the UK in 2016 and has worked his way through since, finishing runner-up in British Formula 4 in 2017, winning the Formula Renault Eurocup in 2019, triumphing in seven of the 20 races that year.

Winning F3 would be another giant step on the ladder to achieving his dream of being the next Australian in Formula 1.

September 12, 2020 Racing Comments Off on From remote control cars to the grid: Melbourne teen Piastri on verge of F3 title
NFL News