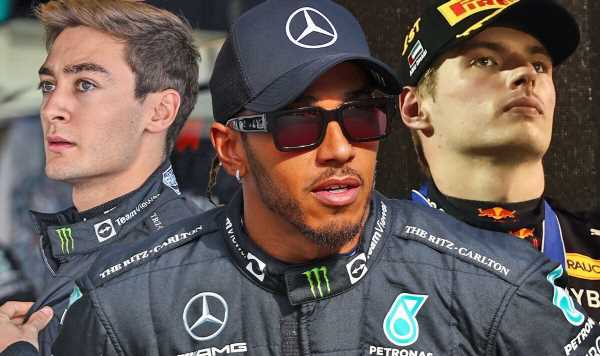 Max Verstappen is the 2022 F1 world champion after a dominant season saw the Dutchman pick up 15 race wins. With the dust settling on the final race in Abu Dhabi, Express Sport is looking to crown the top drivers, the most controversial moment and the best races of a super season. You can have your say below in Express Sport’s 2022 F1 awards.

Verstappen not only won the title but broke records in a historic season for the 25-year-old. His 15 race victories surpassed Sebastian Vettel and Michael Schumacher’s previous tally of 13 in a single season.

But, he faces a challenge to be crowned driver of the year from George Russell who starred in his debut year at Mercedes and even beat Lewis Hamilton. Only two other drivers have scored more points than Hamilton over the course of a season and both (Jenson Button and Nico Rosberg) are world champions.

Russell also secured Mercedes’ only win of the season after holding off Hamilton at the Brazilian Grand Prix. Meanwhile, Red Bull secured their first Constructors’ Championship for 10 years after Ferrari’s early season challenge fell away.

Charles Leclerc looked set to take the title down to the wire but the Scuderia had reliability issues and made crucial strategy mistakes. However, Ferrari have still gained performance under the new regulations which could set up a possible title bid next season.

Meanwhile, Haas shocked the F1 grid in Bahrain as Kevin Magnussen secured points just months after the team were struggling at the back of the field. The American squad left the grid stunned in Brazil after Magnussen claimed a stunning pole in wet/dry conditions.

Verstappen may have enjoyed a commanding advantage, but the on-track action was still as exciting as ever. Verstappen and Leclerc enjoyed a thrilling battle at the Saudi Arabian Grand Prix as the pair both used the DRS to their advantage in a strategic scrap.

The British Grand Prix was one of the standouts of the season as Hamilton went up against the Ferraris and the Red Bulls. Verstappen sustained damage early on which ruled him out of contention and opened up a thrilling duel.

The final laps were taken up with Hamilton, Perez and Leclerc going side-by-side to secure the final two steps on the podium, The race included a thrilling double overtake from the Mercedes star en route to P3.

F1’s sprint races came alive in Brazil as Russell closed and passed Verstappen in the dying laps. On Sunday there was all manner of drama as Hamilton closed in on Russell and the two Red Bulls fell out in a team orders ruckus.

And there was controversy aplenty in 2022 with a whole host of dramatic stories throughout the year. Hamilton and the FIA clashed heads early on as the seven-time champion ignored requests to remove his jewellery.

He eventually followed the rules but not until the Briton had been granted a personal extension. However, the Mercedes driver later admitted he was “f***ing” around with the FIA in another twist to the drama.

Months later, the FIA sided with Mercedes boss Toto Wolff to change the rules around porpoising after Hamilton complained of back pains at the Azerbaijan Grand Prix. Red Bull were also found guilty of breaching the budget cap in October and hit with a 10 per cent wind tunnel penalty for next year.

November 24, 2022 F1 Comments Off on Verstappen vs Russell for F1 driver of the year
NFL News