Lewis Hamilton moved another step closer to defending his world championship title after winning the Tuscan Grand Prix on Sunday afternoon ahead of Valtteri Bottas.

The Mugello race track made its F1 debut on the weekend and it certainly didn’t disappoint, with plenty of twists and turns throughout as Hamilton marched to his sixth victory of the season.

Here, Sportsmail takes a close look at the things we learned from the action-packed Tuscan Grand Prix… NO STOPPING HAMILTON AS HE REIGNS SUPREME ONCE AGAIN

Lewis Hamilton’s dominance continued over the weekend after holding firm to extend his lead in the drivers’ standings to a massive 55 points.

Following opening weekend disappointment after Valtteri Bottas claimed first spot, the Brit hasn’t looked back and it’s now only a matter of time until he gets his hands on a record-equalling seventh world title.

Hamilton has struck gold in six out of the first nine races and it looks like he will coast to yet another world title unless something quite extraordinary happens.

Despite the mayhem at Mugello, Hamilton still managed to navigate his way to a 90th career victory, one short of Michael Schumacher’s pinnacle that many thought would never be touched.

There is a break from the hectic schedule next weekend, but next up for Hamilton it’s a trip to Sochi for the Russian Grand Prix and his supremacy looks set to continue. INEOS WILL BE TAKING OVER A JUGGERNAUT

While Hamilton can’t be stopped, the same can be said for Mercedes as a whole as they already close in on a remarkable seventh consecutive crown.

It’s fair to say that chemical giants Ineos and Britain’s richest man, Sir Jim Ratcliffe, will be getting hold of an absolute juggernaut if their takeover goes through. They would be acquiring a team that looks set to dominate for years to come.

As Sportsmail reported on Saturday, Mercedes are close to signing a £700million deal that will see it sold to Ineos and Ratcliffe.

Ineos, who agreed a £100m sponsorship agreement with Mercedes at the start of the season, bought cycling’s former Team Sky last year.

The company, which also own French football club Nice and are funding Ben Ainslie’s America’s Cup yachting challenge, have agreed to buy a 70 per cent share in the German team, according to former F1 team boss Eddie Jordan and another source close to the deal. ALBON IS GOOD ENOUGH TO KEEP HIS RED BULL SEAT

After some near-misses, Alexander Albon finally got a taste of what it’s like to finish on the podium after securing third place at the Tuscan Grand Prix behind Hamilton and Bottas.

The British-born Thai driver produced a daring move around the outside of Renault’s Daniel Ricciardo to seal third place, and his most memorable race to date within Formula One.

It comes at just the right time for Albon, who has struggled this season in the Red Bull in comparison to his team-mate Max Verstappen.

Red Bull can be quick to act if they don’t like what they’re seeing with Verstappen’s understudy, just like they did by demoting Pierre Gasly back to their junior team AlphaTauri last season, but Albon laid down a statement of intent.

And after his podium success, the 24-year-old thanked Red Bull for sticking by him during some tricky times.

After Albon crossed the line to take his first trophy in F1, team boss Christian Horner told him over the radio: ‘Well done Alex, you did it the hard way today. A really well-deserved podium.’ Mugello – which was introduced to the Formula One calendar because of the impact coronavirus has had on the season – had a debut to remember on Sunday, with plenty of the sport’s biggest stars hailing the circuit.

It was a hugely eventful race, packed with crashes, overtakes and incidents – there were a total of three safety car interventions and two red flags.

And after Sunday’s thrilling race, following up from the exhilarating Italian Grand Prix, it has left the drivers wanting more.

‘I would really love to come back,’ Hamilton said after strolling to yet another victory over his rivals.

Renault’s Daniel Ricciardo declared that ‘we will be happy to come back’ – adding that ‘it was certainly not a dull race.’ ANOTHER SOUR NOTE FOR FERRARI AT THEIR 1,000TH GRAND PRIX

It has been a nightmare season for both Leclerc and Sebastian Vettel behind the Ferrari wheel – sitting eighth and 13th respectively in the drivers’ championship while the Italian giants are sixth in the constructor standings.

And it perhaps sums up their season to date that despite finally getting points on the board at Mugello as they celebrated their 1,000th Grand Prix, there are still plenty of issues to resolve.

Both Leclerc and Vettel struggled for race pace around the Ferrari-owned circuit – the former climbed to third during lap one but progressively fell down the order to end up ninth, only to pick up a place due to a penalty for Alfa Romeo’s Kimi Raikkonen.

Meanwhile, Vettel finished 10th at the Tuscan Grand Prix, having spent much of the race battling with Williams’ George Russell.

And after the race, Leclerc lamented the performance of the Ferrari. ‘We were just slow,’ the 22-year-old slammed.

‘There’s not much more to add to that. I did a good start, put myself, I think, in the best position possible behind the two Mercedes that were going away, so I had free air but just struggling so much with the car. 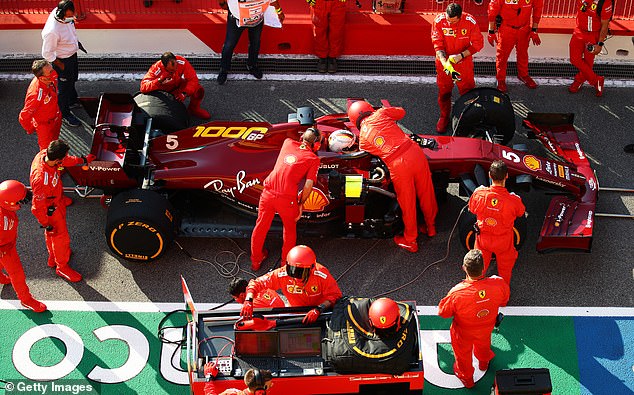 Ferrari celebrated their 1,000th Grand Prix on Sunday but plenty of problems remain

It was nearly Ricciardo’s best moment behind the wheel for Renault, only for him to be pipped to third by Albon at Mugello.

Ricciardo was on course to deliver a first podium for Renault since their return to the sport four years ago but Albon swept by the Australian late on for his maiden podium finish.

And the Australian came so close to making team principal Cyril Abiteboul get a tattoo thanks to a bet the pair agreed on.

Before the season started, Ricciardo and Abiteboul shook on a bet that would see the team principle get a tattoo of the Australian’s choice if he managed to score a first podium for Renault.

The wait unfortunately goes on but Ricciardo admitted it certainly wasn’t on his mind during the closing stages of the race.

‘To be honest I wasn’t thinking about tattoo designs, but I was thinking about the trophy and some champagne,’ he said. ‘It was hot out there, so I was certainly thirsty for that.’ September 14, 2020 F1 Comments Off on SIX things we learned from the Tuscan Grand Prix
NFL News