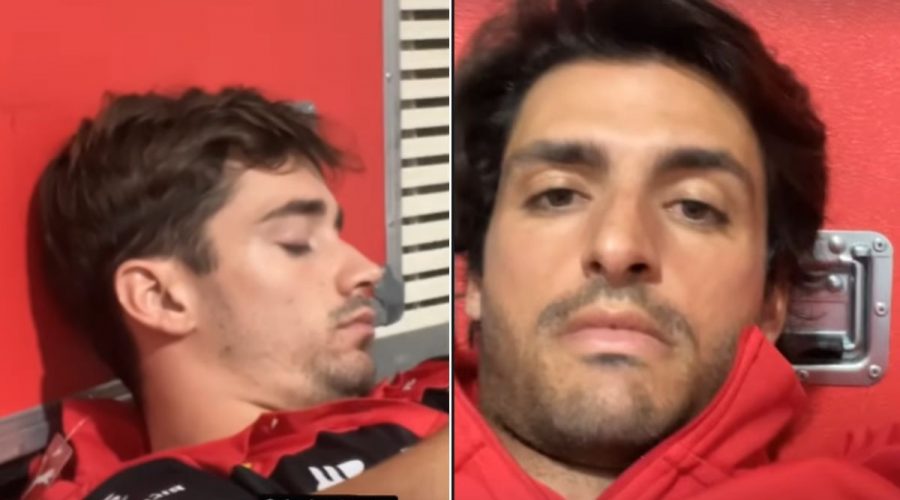 Gary Lineker hits out at BBC over past World Cup coverage

Carlos Sainz caught Charles Leclerc sleeping during Spain’s impressive opening match of the 2022 FIFA World Cup. The 28-year-old witnessed his nation rout Costa Rica 7-0 in their opening match in Qatar, sending a strong statement to the rest of the teams.

While the 2022 British GP winner caught all the action at the Al Thumama Stadium, his Ferrari team-mate couldn’t stay awake. Both drivers are currently in Abu Dhabi for postseason testing and the Spaniard filmed him taking a nap and posted it to his six million Instagram followers.

Sainz raised his eyebrows as he put the camera on his snoozing team-mate while watching the game on a laptop, and it’s fair to say Leclerc missed a thriller of a game as Spain showcased their credientials to the world.

Teenage star Gavi announced himself on the global stage with a brilliant volley during Spain’s sparkling passing performance. A brace from Ferran Torres along with goals from Dani Olmo, Marco Asesnsio, Carlos Soler and Alvaro Morata overwhelmed a poor Costa Rica side, who failed to register a single shot and only managed 231 passes to 1,043 from Spain. An 82% pass completion rate from La Roja is simply sublime and their link-up play was a joy to watch.

With shock losses suffered by Argentina and Germany in this World Cup already, Sainz will have been more than happy to see his country get off to a flying start, even if his team-mate wasn’t quite so entertained.

Within the world of F1, Ferrari have denied all reports that team principal Mattia Binotto is set to be sacked. Ferrari president John Elkann has reportedly decided that it’s time for Binotto to go, with Alfa Romeo boss Frederic Vasseur tipped as the favourite to replace him from as soon as January.

Carlos Sainz has opted not to “talk about” the rumours due to having never been part of a team where the boss has been sacked, but perhaps doesn’t think a change of leadership is needed, though, due to seeing a “lot of unity” amongst the Scuderia. “I haven’t experienced any change of team principal yet and I don’t know how I’ll feel about it,” the Spaniard told Italy’s Sky Sport.

“But as long as they’re just rumours, I prefer not to talk about it. I don’t find it necessary because the person who invented it could be someone who doesn’t understand well.

“I am calm, I see a calm team and I see a lot of unity within the team. These rumours and criticisms will always be there at Ferrari – it’s been like that for dozens of years. If we do a one-two this weekend, suddenly everything will be forgotten and we move on.”

Vasseur maintains a good relationship with Leclerc, having been the 24-year-old’s boss while he was at Alfa Romeo. But the Monaco native has distanced himself from the speculation surrounding Binotto. “There are always rumours around Formula 1,” said Leclerc. “I don’t think we should give too much attention to that.”