Yamaha rider Fabio Quartararo lost the Spanish GP, and his MotoGP riders’ championship lead, after suffering from arm pump mid-way through the race, he explained.

The Frenchman, who carried a healthy points lead into this past weekend’s race at Jerez, looked in fine form early on as he surged into the lead and, along with Ducati’s Jack Miller, broke clear of the chasing pack.

But, after building a solid 1.5-second gap to Miller in second and seemingly looking comfortable, disaster struck as Quarteraro began to suffer from a chronic exertional compartment syndrome, the condition more commonly known in the paddock as arm pump.

The condition, which affects athletes who suffer prolonged, sustained load through joints during the course of competition, causes intense pain and swelling in the muscles and can render an athlete unable to use the affected limb until the strain on the muscle has been has been suitably removed.

The issue plagued Quartararo during the second half of the 25-lap race as Miller managed to overhaul the gap to the Frenchman and eventually pass him for the lead.

Then things went from bad to worse for the Yamaha ace, as he was swiftly caught by Francesco Bagnaia, then Franco Morbidelli as he lost his spot on the podium. 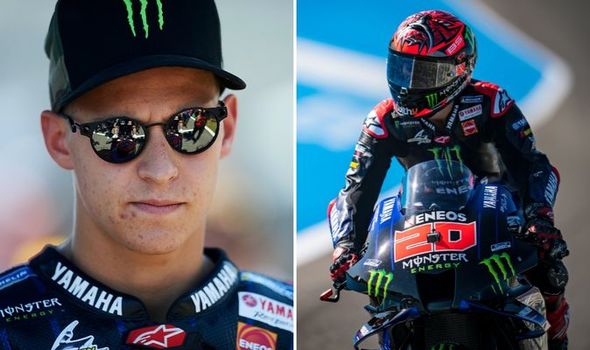 Riding through agonising pain in the closing laps, Quartararo did well to finish, but by the time he crossed the finish line he was lanquishing down in 13th place.

On-board camera shots after the finish showed Quartararo in clear pain as he folded his left arm under his body in an attempt to ease the pain.

Following the race, the 22-year-old confirmed arm pump was the reason for his sudden drop down the order.

“The arm pump problem was clear today,” he explained.

“For more or less 10 laps I could hold Jack Miller at bay by one second, but then I suddenly had no more feeling in my right arm.

“We were in a great position to win here. I could have even gone a bit faster. Our strong point of riding on the used tyre was finally not necessary, because I didn’t have any power left in my arm.

“I will take my time today to think over the situation and try to make the best decision about how to deal with arm pump as soon as possible.”

Some riders look to undergo surgery to help ease the condition, while others opt for rest and rehabilitation in the hope that the condition will not return at their next visit to a track.

With the MotoGP championship set to head to Le Mans for the French GP from May 14-16, Quartararo knows the window to get fit in time for his home round is short, and said he will consider his options to ensure that he can race at full fitness at the famous French circuit.

“My home Grand Prix is coming up next, and I want to be fit there, that’s important to me,” he stated.

“I know that the bike works well there and that I will perform well.

“I want to solve this problem as fast as possible, but in the best way.”