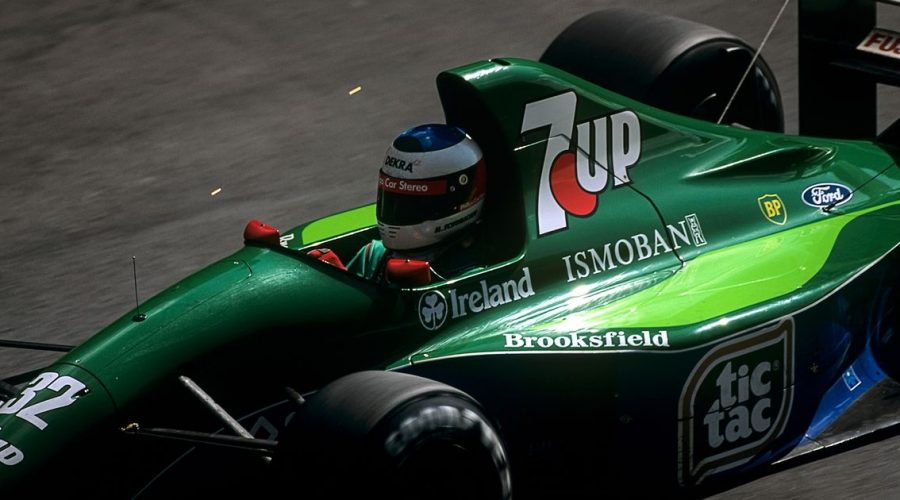 Formula One fans have a chance to own a unique piece of history after the iconic Jordan 191 in which Michael Schumacher made his debut was put up for sale.

Schumacher took F1 by storm after beating his more senior team-mate, Andrea de Cesaris, in practice at the 1991 Belgian Grand Prix as a late replacement for Bertrand Gachot.

The German was just 22 when he was called to fill in for Jordan-Ford driver Gachot, who had been imprisoned for his role in an altercation with a London taxi driver in December 1990.

Chassis No. 6 is the exact car in which Schumacher first sparkled at the Circuit de Spa-Francorchamps, and Motor Sport revealed the green machine can be purchased for a princely £1.25million.

Speedmaster Cars is the dealer responsible for the sale, and proprietor James Hanson said the quality is clear despite 30 years having passed since it made its arrival in F1.

Hanson said after recently testing the car at Donington: “Anything F1 machine from this period or little later is just so fast. It has so much grip, everything about this car just boggles the mind.

“The car is so pure – you turn the steering wheel and it goes where you want it to go, you brake and it stops.

“It wants to be driven fast, it’s involving to drive.”

Do you think Lewis Hamilton will break Schumacher's record for F1 titles in 2021? Let us know in the comments section.

Schumacher was contracted with Mercedes at the time of the 1991 Belgian Grand Prix but had yet to make his F1 debut when Jordan-Ford requested he fill in for Gachot.

Of the three cars they brought to Spa in 1991 (chassis No. 4 through 6), it was the latter Schumacher piloted to a superior practice result compared to Cesaris.

Despite having never driven the Jordan 191, Schumacher went on beat his temporary team-mate in qualifying as well, finishing seventh overall while Cesaris could only manage 11th.

Schumacher had already handed chassis No. 6 back to his Italian comrade before qualifying, but his name had already been cemented as a possible star of the future.

Eddie Jordan’s team attempted to sign the driver permanently, but it was Benetton-Ford who ended up winning the race for his loyalties.

That potential wasn’t to be fulfilled at Spa, however, as Schumacher’s 1991 entrance ended after only two turns due to a clutch problem.

The 1991 Belgian Grand Prix nonetheless holds special significance for one of the greatest drivers of all time, who went on to lift a joint-record seven world championships.

Mercedes star Lewis Hamilton has since equalled that trophy haul and is targeting a record eighth crown at the end of the current 2021 season.

Hanson continued his praise of the Jordan 191, adding: “It doesn’t feel like it’s going to have any moments. Some F1 cars feel like they’re on a knife-edge, they’re not that well balanced.

“The 191 has loads of downforce, loads of grip, it doesn’t do anything untoward. It feels like it’s going look after you.”

Motorsport fans have kept close tabs on Schumacher’s condition since the racing superstar suffered a traumatic head injury while skiing in December 2013.

Former Ferrari boss Jean Todt said in May that he still visits his old friend every month, with Schumacher celebrating the most successful period of his career alongside the Frenchman.

Schumacher’s son, Mick, made his Formula One debut earlier in 2021 after he signed a multi-year agreement with Haas.

June 9, 2021 F1 Comments Off on Michael Schumacher’s debut F1 car up for sale though it won’t come cheap
NFL News