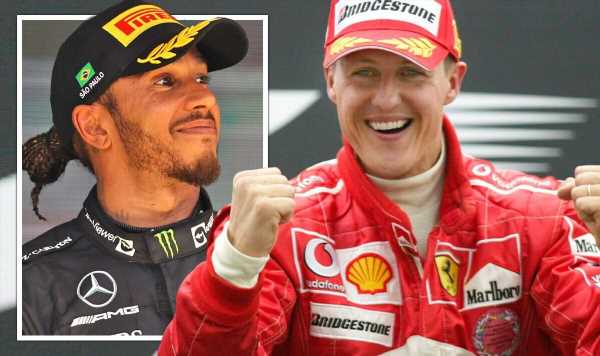 Michael Schumacher and Lewis Hamilton enjoyed similar paths to F1 en route to securing seven world titles. Both future champions struggled to afford expensive karting fees before picking up backers to help them over the line.

Express Sport looks at the pair’s road to F1 greatness.

Schumacher may be one of the sport’s most successful drivers, but he came from humble beginnings as his family struggled compared to his on-track rivals. Speaking on his early karting career, The seven-time champion admitted he made the best of what he had.

He explained: “We always used the cheapest equipment available. I fished discarded tires out of the bin, put them on my go-kart and won races with them. I was always glad to have won with the worst and not the best equipment.

“Having to really fight like that was an additional motivation for me.” Lacking funds needed to fund a route to cars, Schumacher’s future was saved by the help of two local businessmen.

He received the backing of Gerd Noack, the chairman of Kerpen karting track where Schumacher started out. Jurgen Dilk also gave him some funds to continue and eventually paid for a move into Formula Ford.

After achieving success, he garnered the backing of Schumacher’s future manager Willki Weber who helped him move into German Formula 3. He claimed the crown after two seasons before being taken into Mercedes’ sports car programme.

The young German starred in his F1 debut which came under controversial circumstances. Jordan’s regular driver, Bertrand Gachot, had been jailed, leaving a space free for the 22-year-old Schumacher to show his talents.

He qualified eighth on his F1 debut at the tricky Spa-Francorchamps circuit despite having never driven the layout. He even started two rows ahead of more experienced team-mate and F1 veteran Andrea de Cesaris, and went on to enjoy a whole load more success in the sport.

Similarly, Hamilton struggled with a lack of funds in karting before his big break. His father Anthony worked two jobs and even re-mortgaged his house to fund his son’s promising talent.

Hamilton had even admitted the pair blew £20,000 in the first year of karting after transitioning from racing remote control cars. Almost identical to Schumacher, Hamilton eventually secured backing to help him on the road to F1.

This came in the form of McLaren boss Ron Dennis after meeting him at the Autosport Awards. The Mercedes star explained: “I tapped him on the side, and I said: ‘Hi, I’m Lewis Hamilton, and I’ve just won the British Karting Championship, and one day I want to be Formula 1 World Champion in your car.’

“Then he sat down with me and spoke with me. I don’t remember what he was talking to me about at the time because I was probably star-struck or something, but he did put down in the book his nice autograph, and then he said: ‘Phone me in nine years’.”

With McLaren’s support, Hamilton competed in European karting series, Formula Renault and Formula 3 before moving into GP2. He won the series in his first season and was promoted to a full-time McLaren drive when Kimi Raikkonen moved to Ferrari for 2007, with his success since well known.

January 21, 2023 F1 Comments Off on Michael Schumacher and Lewis Hamilton had near identical routes to F1
NFL News