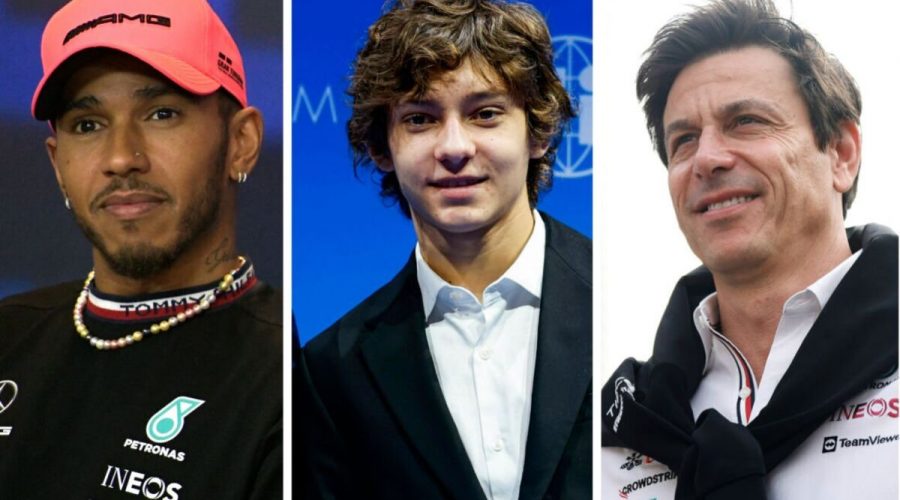 Budding motorsport star Andrea Kimi Antonelli is seen as one of the sport’s hottest prospects, and has been dubbed the next Lewis Hamilton. The 16-year-old started karting aged seven and won a string of titles which attracted the attention of Mercedes, before earning a place on their driver academy programme in 2019.

Antonelli made his debut in a single-seater for Prema in the Italian F4 championship just three weeks after turning 15. Despite his inexperience the youngster quickly reached the top – finishing on the podium in the final three rounds.

Last year the Italian dominated the series, winning 13 of the 20 races and informed Mercedes principal Toto Wolff about his success along the way. Antonelli told Fanpage.it: “I have a wonderful relationship with Mercedes and I also speak often with Toto and I always update him on my weekends and how they are going.

“I have a good relationship with him but also with the Mercedes Academy: they always follow me. I must say that I am very happy to be with them because they are helping me a lot and I know that with them I will be able to go a long way.”

This year Antonelli will compete in the Formula Regional European Championship (FRECA) instead of the FIA Formula 3 as he continues his pathway to F1. A traditional climb through motorsport would see the Italian competing in F3 during 2024 and F2 the following year with a potential F1 spot in 2026.

Mercedes quickly noticed the talent of the Italian during his karting days – signing him to their Mercedes Junior Team in 2019 with head of the driver academy Gwen Lagrue describing the youngster as a ‘phenomenon’. Antonelli has already been backed to become an F1 winner, with Mercedes boss Wolff stating: “We will watch Andrea Kimi Antonelli rise to Formula 1 and win races.”

Rising British star George Russell was shown similar faith by Mercedes as he followed the same junior driver’s programme during his progression to become an F1 driver. The British driver switched to Williams to make his F1 debut in 2019 before re-joining Wolff and Mercedes last season.

Russell showed his talent for Mercedes last year, taking his first F1 victory at the Brazilian Grand Prix and accumulated more driver’s championship points than team-mate Hamilton – who was part of the McLaren young driver’s programme as a youth. Antonelli will be hoping to make a similar mark on F1 under the guidance of the Silver Arrows and principal Wolff.