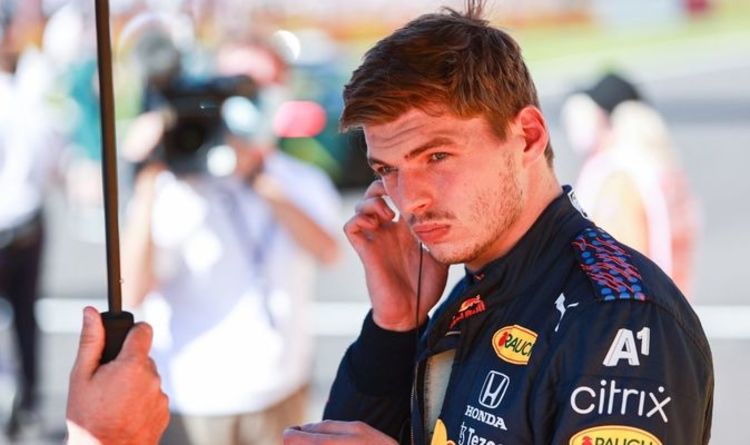 Max Verstappen admits he was ‘really worried’ whilst waiting for the back of the grid to line up for the inaugural sprint qualifying as his front left brakes set on fire, with Lewis Hamilton looking to lead the pack into turn one.

Huge plumes of smoke billowed from the front left of his car ahead of Saturday’s sprint race, as onboard showed flames coming from his left front brake which was ablaze.

The Dutchman had an electric start and swept past Hamilton during the opening moments of the race, disappointing thousand of home fans that adorned the grandstands at Silverstone, waving their Union Jack flags.

The seven-time world champion had started on pole after setting a blistering lap during Friday’s qualifying session and was looking to keep Verstappen at bay off the line.

However, it was Verstappen who gained the advantage as Hamilton suffered wheelspin as the lights went out, however not all was calm under the Dutchman’s helmet.

“I was really worried, a little bit of fire, it’s okay but at one point it was becoming quite big and I was just looking at my mirror to the guys at the back, please – speed up, speed up,” he said.

“So then, of course, I was not sure going into turn three if my brakes were going to work but luckily it didn’t do too much damage.

“I think I saw a few people in the grandstand taking pictures when the brakes were on fire so for sure they had a good few shots.”

Verstappen took victory at the Northampton circuit over Hamilton, and with it secured pole position ahead of the British Grand Prix on Sunday.

F1 were trying out a new format for the weekend, with qualifying taking place on Friday for Saturday’s 17-lap short sprint race, which decides the grid come Sunday.

And the 23-year-old said he enjoyed many aspects of it.

“I think what was nice. In the beginning, was because you start with lower fuel in this race, so naturally, the cars are faster and that’s what you like, gives the car a bit more life,” he added.

“And so that was fun, compared to heavy car and everything is just slow in the beginning so I enjoyed that with, for sure.

“What is important is to try and make a good start, have a clean first lap, and then, of course, you try to settle in you know, and follow your pace.

Hamilton applied pressure on his main title rival and championship leader Verstappen for much of the opening lap before the Dutchman eventually was able to pull out a gap.

After the race, the Briton felt he was “flat out” while Verstappen wasn’t particularly “pushing too hard” for the win.

Yet the Red Bull driver dismissed that theory, with his lead now 33 points ahead of Hamilton.

“I was pushing otherwise I cannot keep Lewis behind, I mean, you could see that also my tyres were blistering,” Verstappen said.

“I guess we’ll find out tomorrow during the race how competitive we’re going to be because then fuel loads are again different.

“Car will be moving around a bit more, so we will find out.”