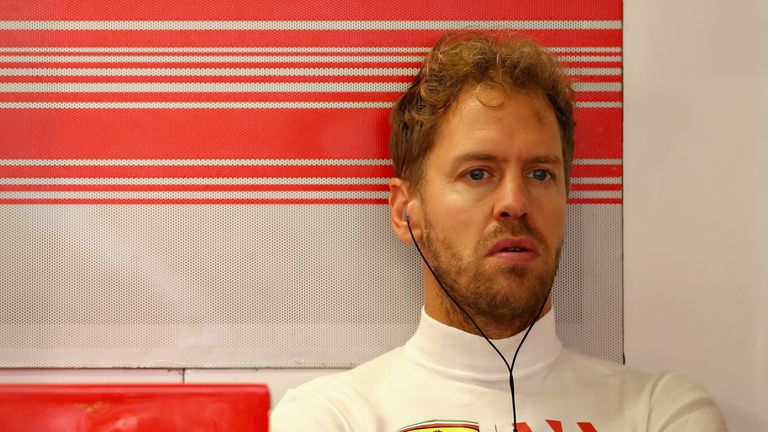 Early missed opportunities
It may feel like an awfully long time ago now, but at the start of the season it was Vettel, and not Hamilton, who was the four-time world champion in form.

Such was his and Ferrari’s superiority, Vettel could and should have taken victories in the season’s first four races.

That he ended that opening stretch behind Hamilton in the championship would have been immensely disappointing for the German, and it’s tough to imagine that his rival didn’t take a huge amount of confidence from the fact he had a title lead despite not performing at his best.

Vettel won the season openers in Australia and Bahrain, so far, so good, but hit problems at the next two races. Now, we’re not suggesting he could have done too much differently in China – Vettel secured pole, got passed by Valtteri Bottas through pit-stops and was later clumsily taken out by Max Verstappen as Red Bull aced their strategy – but Azerbaijan was a missed opportunity.

Hindsight is a wonderful thing, but how Vettel must regret that failed overtake on Bottas. Vettel had dominated the race from pole before the late Safety Car played into Mercedes’ hands, and the Ferrari driver was then overly optimistic as he immediately attempted to take back the lead upon the restart. A huge lock-up into Turn One meant Vettel missed the corner, falling behind Hamilton and Kimi Raikkonen in the process, while he later lost a place to Sergio Perez in the Force India.

As it turned out, Vettel would have been best-placed biding his time behind the Mercedes as Bottas suffered a race-ending puncture one lap later; a retirement that opened the door to Hamilton to take an unlikely victory, with the Englishman subsequently holding a four-point advantage over Vettel in the standings.

Horror in Hockenheim
Despite a collision with Bottas in France, Vettel exited the triple header with an eight-point lead after a fine win at Silverstone, typically a Hamilton and Mercedes stronghold, and was on a roll. A Hockenheim pole, with Hamilton down in 14th after a Mercedes failure, only added to Vettel’s momentum as F1 headed towards its summer break.

It was all looking so rosy for Vettel, even as the rain started to fall. Yes, Hamilton was charging through the field, but Vettel still held a comfortable advantage over his rival, and all he had to do was nurse his Ferrari home to tighten his stranglehold on the championship.

But Vettel couldn’t do that. With 15 laps remaining, he lost concentration, just for a split-second, and beached his Ferrari into the gravel.

To make matters worse, Hamilton took the most unlikely of victories.

“That day in Hockenheim, it was effectively a 32-point turnaround for Sebastian Vettel,” noted Sky F1’s Martin Brundle.

Has he ever truly recovered? 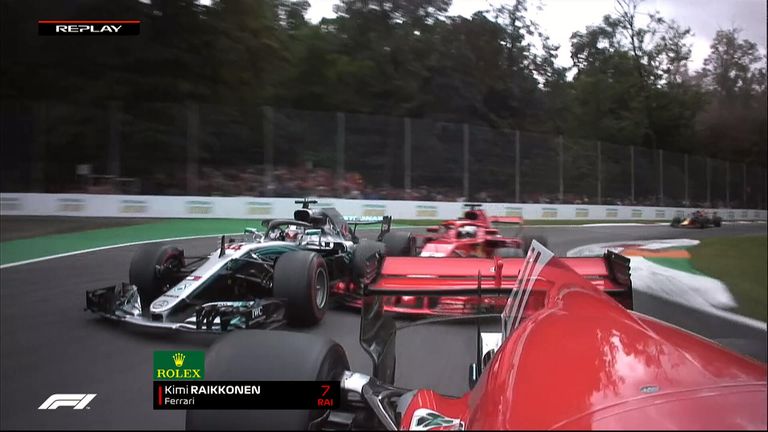 A Monza meltdown
Vettel had another supportive crowd to look forward to at Monza, in front of Ferrari’s tifosi, and once again he was heading into a home GP off the back of a morale-boosting victory in what appeared to be the dominant car on the grid.

Hamilton had no answer to Vettel at the previous race in Belgium.

A front-row lockout pointed at more Ferrari domination – but there was already tension mounting behind the scenes as it was Kimi Raikkonen, and not Vettel, who secured pole.

Perhaps that played on Vettel’s mind on the first lap of the race.

The German was desperate to get ahead of Raikkonen but moved all over the track in the run to Turn Three, and Hamilton audaciously carved around the outside of the Ferrari. Vettel still had racing room but clipped Hamilton and span, to the despair of a partisan crowd.

Hamilton was the ultimate predator as he then successfully hunted down Raikkonen for another opportune but masterful victory, appearing to relish his role as the pantomime villain. While Vettel was making mistakes in the season’s most important moments, Hamilton was thriving in wheel-to-wheel combat.

But it must not be forgotten that this was an own goal from Ferrari, too. As Brundle stated, “Ferrari threw it away on Saturday.”

Vettel, meanwhile, was now 30 points behind Hamilton. But he still had the fastest car. Right? 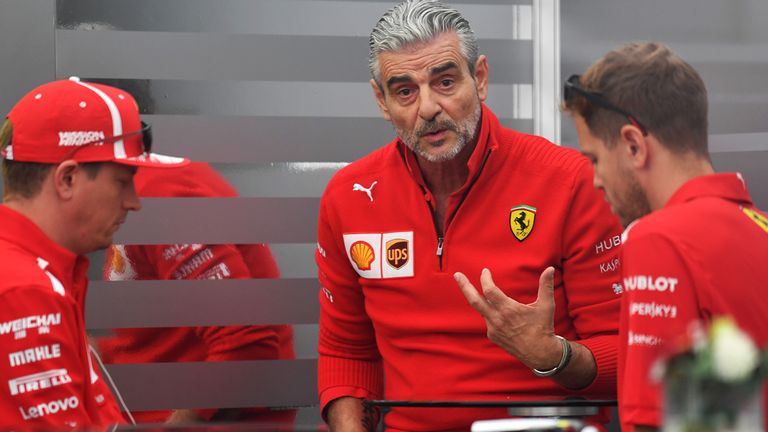 Hamilton’s Singapore masterclass, and did Ferrari downgrade their car?
Singapore was labelled as a must-win for Ferrari, and on paper it was Red Bull, the winners of the last street race in Monaco, and not Mercedes who would provide the Scuderia with their stiffest competition.

But Hamilton wouldn’t be stopped.

Out of nowhere in qualifying, the reigning world champion produced a Senna-esque lap under the lights, outpacing Vettel, third behind Verstappen, by a whopping half a second. Hamilton would go on to ease to victory, with Vettel unexpectedly falling 40 points behind his rival.

But it wasn’t just the defeat that was a major blow to Vettel, it was the fact that Ferrari had just wandered down a developmental cul-de-sac, one which they couldn’t escape in time.

Eager to increase downforce, Ferrari, whose upgrades up until September were mighty, brought several new parts to Singapore. But despite the lack of pace there, they continued to experiment in Russia, before finally abandoning their new bits for the race in Japan.

“Ferrari went the wrong way with updates,” insisted Brundle. “Such is the complexity of these cars, it took them an age to work out they had gone the wrong way.”

Even Vettel acknowledged Singapore as a major turning point, explaining: “From Singapore onwards we just didn’t have the pace to keep up with Mercedes for a couple of races.”

Ferrari finally reverted back to their older, pace-setting version for the US GP – a damning admission of failure – and were immediately on top again. How frustrating must that have been for Seb. 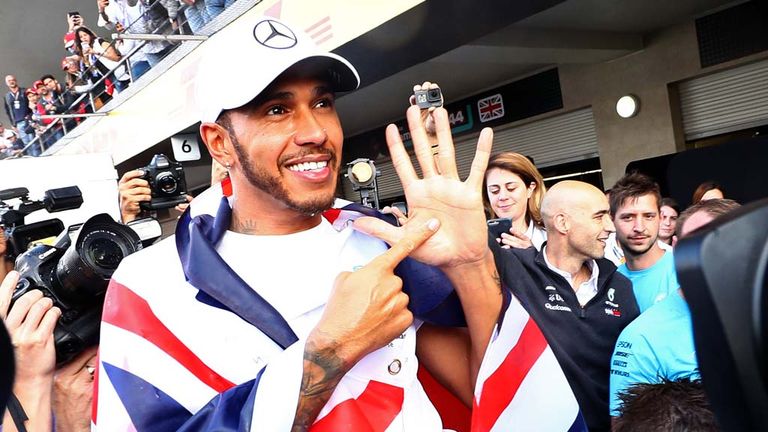 Vettel spins, Hamilton wins
But even though Ferrari momentarily slipped to around 0.5s-a-lap slower than Mercedes, a title fight to the finish would not have been entirely out of the question were it not for the drastic swings in form between Vettel and Hamilton.

From Italy to Texas, Vettel was involved in three collisions in five races – one with Hamilton and one with each Red Bull – and in doing so, did he illuminate his one real weakness?

“Vettel’s forgotten how to do wheel-to-wheel combat,” was Brundle’s verdict after he crashed into Ricciardo, just two weeks after a “crazy lunge” into Verstappen in Japan.

Hamilton, on the other hand, barely put a wheel off-line in that period, taking four successive wins in the process.

“While Ferrari were self-imploding with upgrades that didn’t work and Sebastian Vettel was making mistakes, it was those four in a row that did it for Hamilton,” insisted Sky F1’s Ted Kravitz.

Nothing should be taken away from Hamilton. Ferrari were struggling, but Mercedes aren’t the only race-winning team this season, and Hamilton isn’t the only Mercedes driver. Red Bull, however, couldn’t get close to Hamilton when it mattered most in Singapore, while Bottas hasn’t finished ahead of the Briton since round seven of the season in Canada.

Indeed, Hamilton has outscored Vettel by 40 points since the summer break – and it’s been a quite breathtaking run of form that has led him to a historic fifth crown.