Lewis Hamilton secured a record-equalling seventh world title by winning the Turkish Grand Prix on Sunday, matching the tally of Ferrari legend Michael Schumacher. One of Hamilton’s biggest fans is his mum Carmen Larbalestier, who regularly cheers the F1 star on during his races.

Who is Carmen Larbalestier?

She separated with Hamilton’s father Anthony when the driver was two years old.

Prior to his win in Turkey, the Mercedes star paid tribute to his mum. 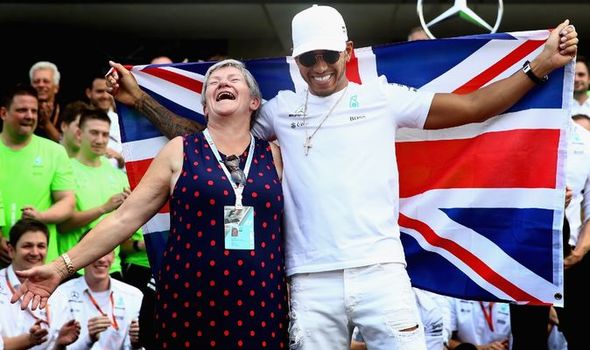 He posted a birthday message on social media, describing her as “the best part of me”.

Hamilton wrote: “I want to take a moment to celebrate my mum today.

“The unconditional love you’ve shown me is unmatched and I feel so lucky to have a mother as wonderful as you.

“You are the best part of me. Happy Birthday mum, I hope you have the best day.”

He wrote: “This moment in time I will never forget.

“We started with nothing, he had 4 jobs to keep me racing at one time and I slept on the couch.

“We dreamt of doing something, something so far out of reach, becoming an F1 driver.

“For a family with no money, we may have looked and sounded crazy.

“People would laugh at us, call us names, joke about us but we kept our heads down. We did our fighting with actions on track.

“Those who judged us back then, I wonder if they look upon us with hate and anger that we proved them wrong or maybe they’ve grown and think ‘good for them’.

“I like to think the latter. But we did it as a family and we never gave up.

“So if you’re out there wondering, doubting yourself, don’t!!

“Don’t give up, keep pushing, keep dreaming and talking that dream to existence.

“You can do anything you put your mind to. I believe in you and so should you.”

November 15, 2020 F1 Comments Off on Lewis Hamilton mum: Who is Carmen Larbalestier? ‘You are the best part of me’
NFL News