At moments under the Texan sun, with his foot to the floor, Lewis Hamilton pressed his case as the greatest performer his fast-living sport has ever known.

But, when the 56 laps of a pulsating, nail-biting, strategy-impinged US Grand Prix were over, he could not join the man he called Formula One’s godfather, Juan Manuel Fangio, as a five-times world champion. Not yet.

It was instead a moment for dejection at Mercedes, where they made a rare error in bringing him in early, and then keeping him out too long, thus costing him the title on the day. 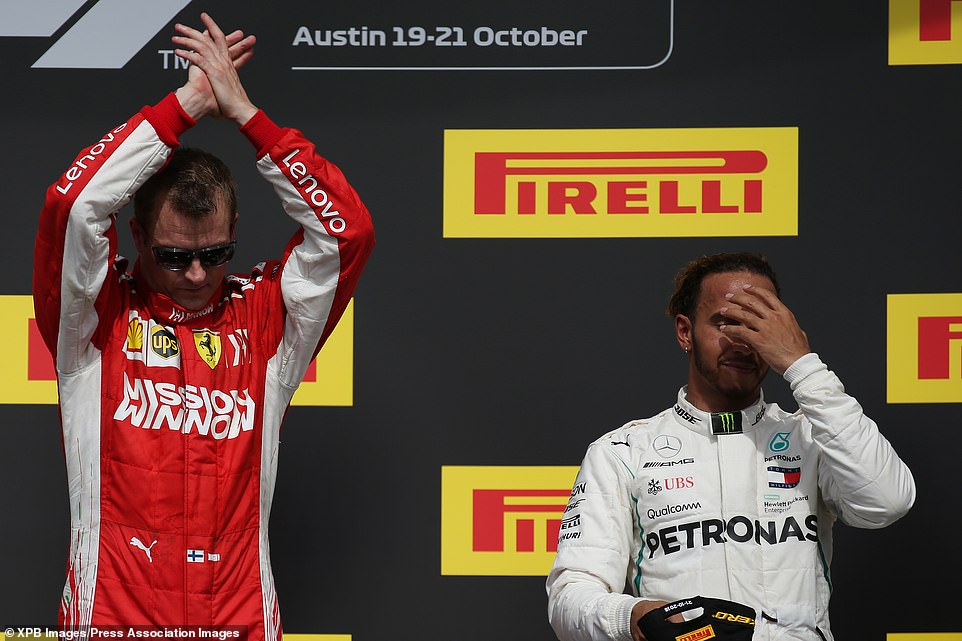 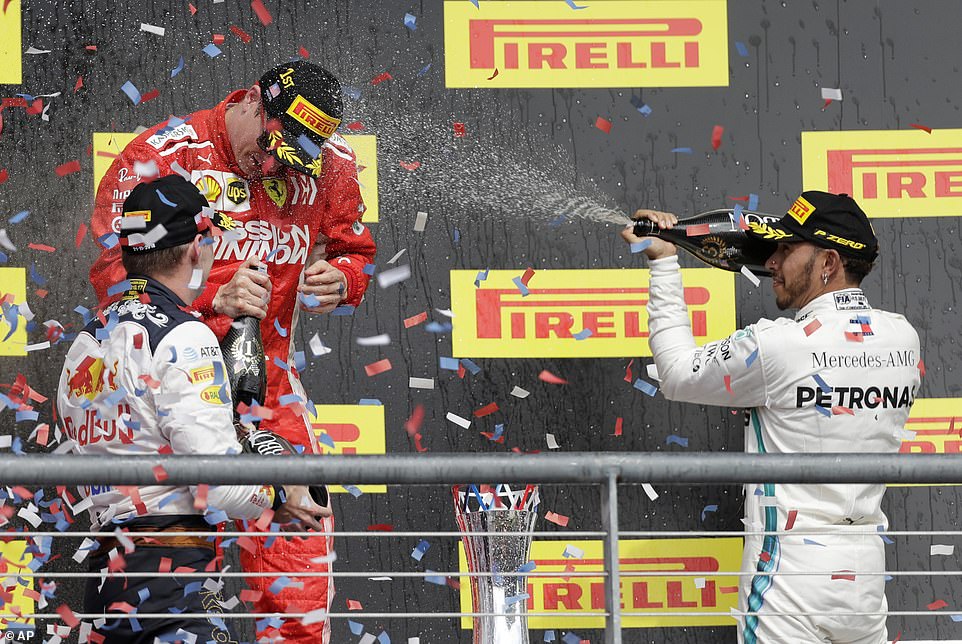 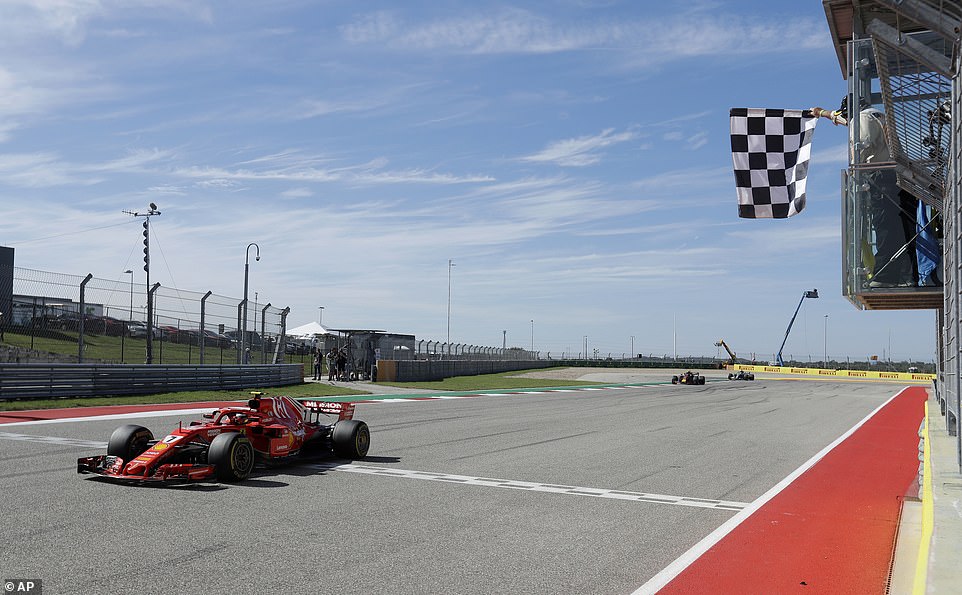 There was a wonderful last duel, two laps from the end, when he fought for the second place he needed to bag the title against Max Verstappen, side-by-side, hearts-in-mouths.

But he could not quite summon the extra pace he needed to make the brave and battling move stick. Hamilton finished third and we roll on to Mexico for the next instalment.

Kimi Raikkonen won for Ferrari, Verstappen was second and Sebastian Vettel fourth and mathematically, though nothing more, still in the title hunt. He is 70 points adrift with 75 on offer.

‘I thought we could do better, but we have to keep pushing at the next race,’ said Hamilton. ‘I had way, way too far to go to get to the front. I don’t know what happened with the strategy.’ 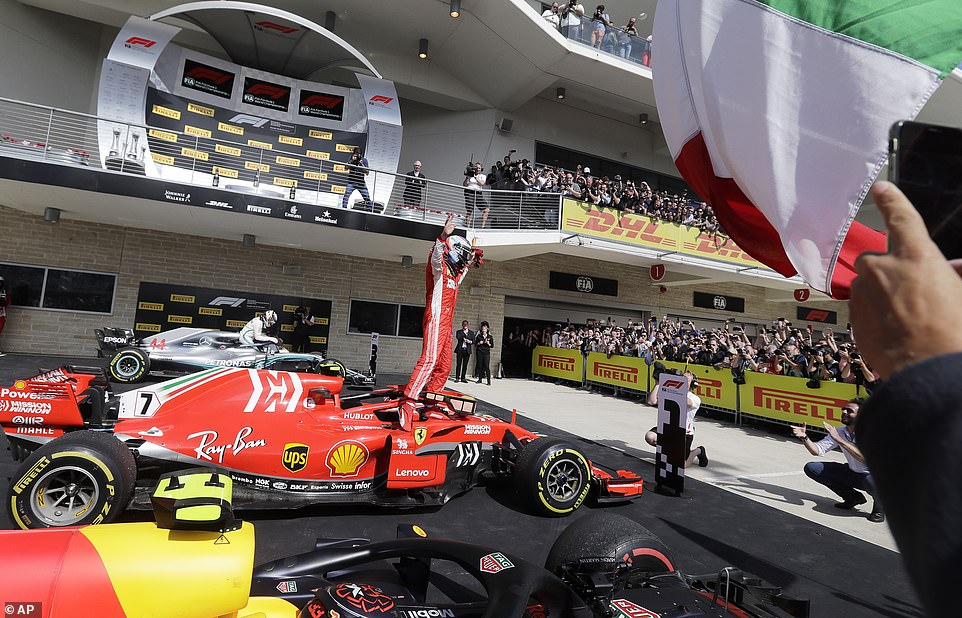 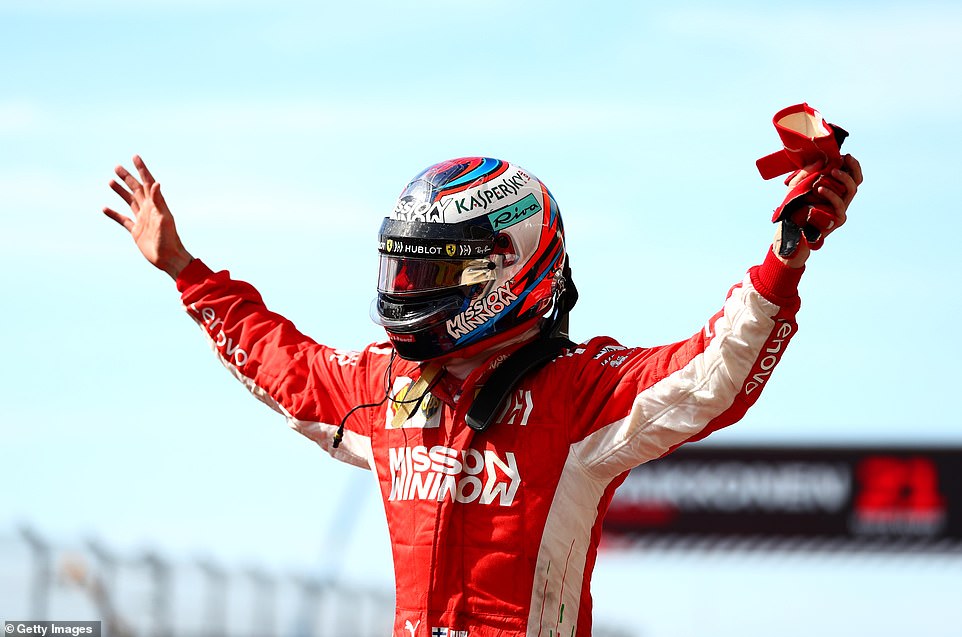 At 39-years-old, Raikkonen could have won his final F1 race before his move to the slower Sauber team next season

It was an afternoon to induce heart failure among partisans in the garage and the Union Jack-clad throng who teemed into the Lone Star State from Britain.

We first feared for Hamilton’s fate when the 33-year-old lost his first place off the grid to Raikkonen. That raised the possibility, much later borne out, that Vettel could scamper up from fifth to fourth and throw an unwanted number into the equation.

Nothing simple all afternoon. Vettel, who had passed Red Bull’s Daniel Ricciardo for fourth on lap one, then immediately lost his shape, wobbled in his mind and made contact with the Australian as he tried to retain the place he had just surrendered. Vettel plummeted to 15th. 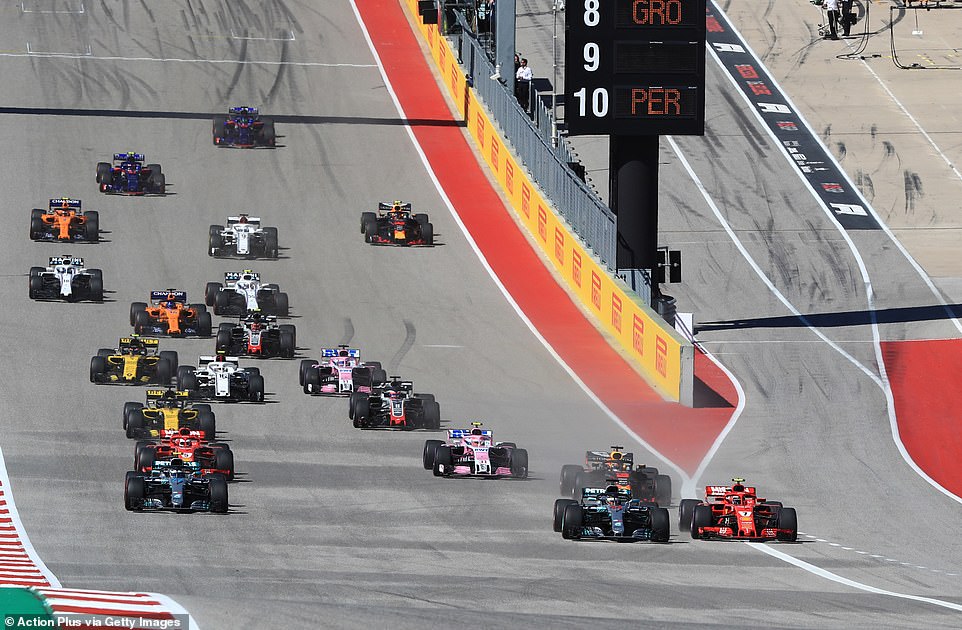 Despite starting second on the grid, Raikkonen made a stunning start as he attempts to pass Hamilton on the inside 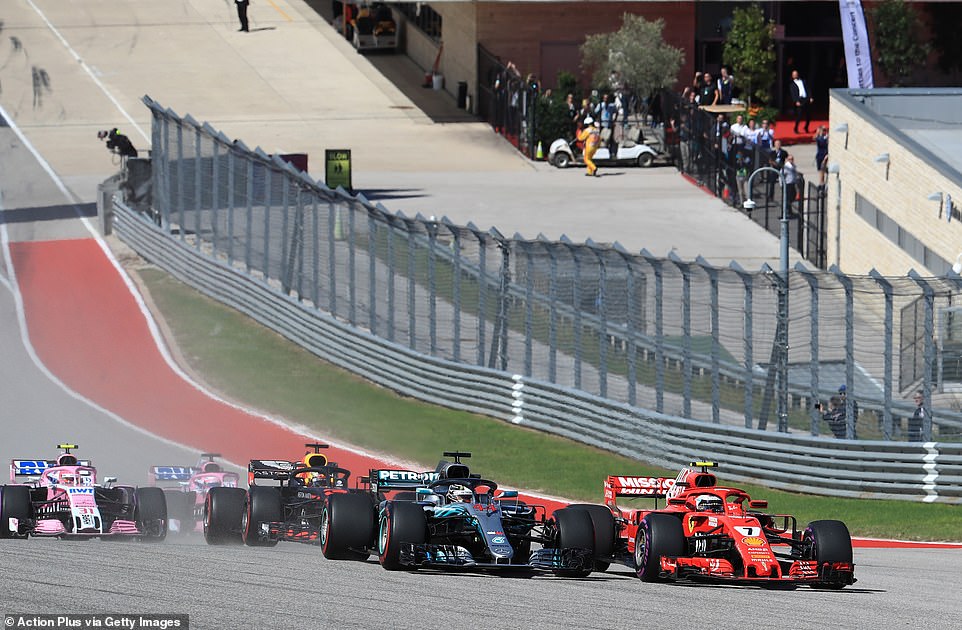 Heading uphill into turn one, Raikkonen sneaks ahead of Hamilton as they move into the left-hand corner in Austin, Texas 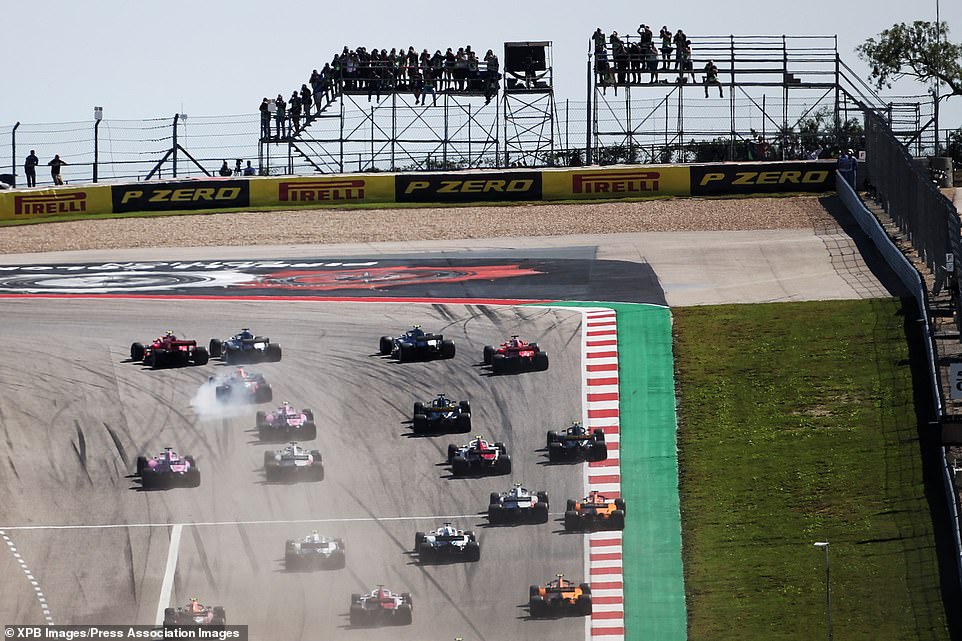 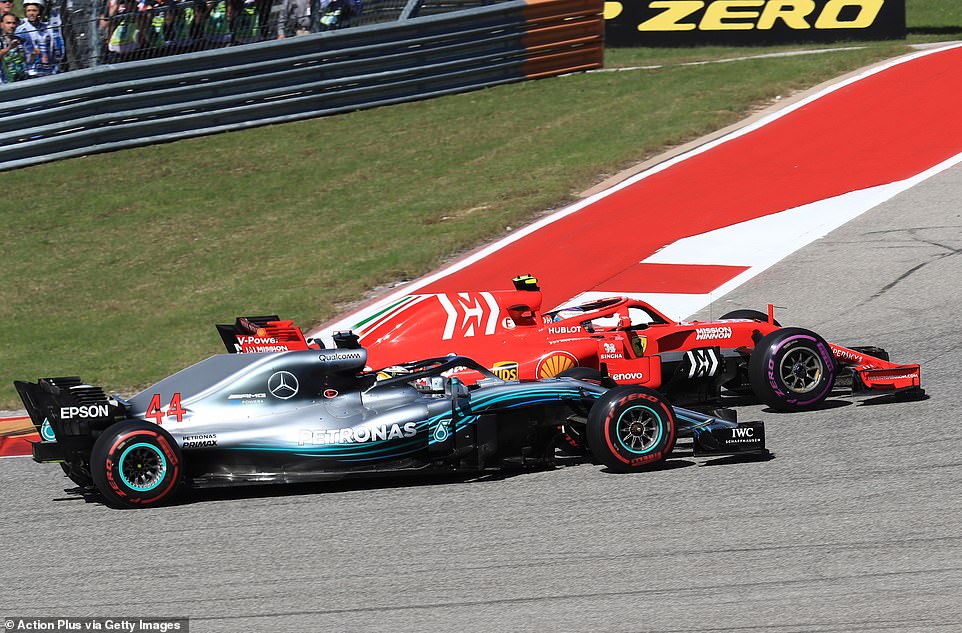 It was moments later that Hamilton paraded himself in some of his brightest colours, turning the screens purple – the colour that denotes fastest sectors and laps.

He had been brought in for the problematic early stop when racing was anaesthetised by the Virtual Safety Car phase, deployed when Ricciardo retired, and now he was pounding the asphalt of the Circuit of the Americans with a bravura no peer could emulate.

In the form of his life, he got straight on to Raikkonen’s tail. In fairness, the Finn was a fine adversary, fighting cleanly and holding Hamilton’s charge off manfully. Should Ferrari be dispensing with his services next season? I think not. 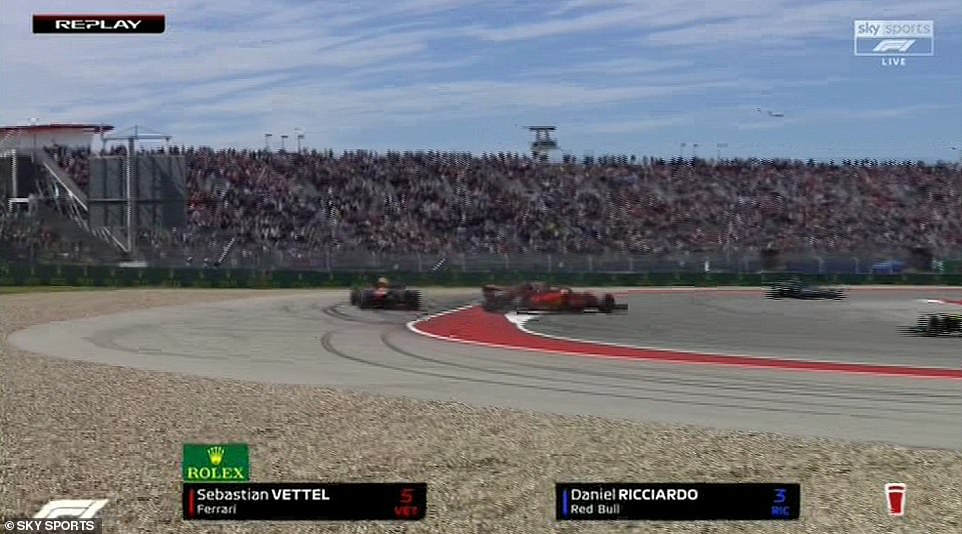 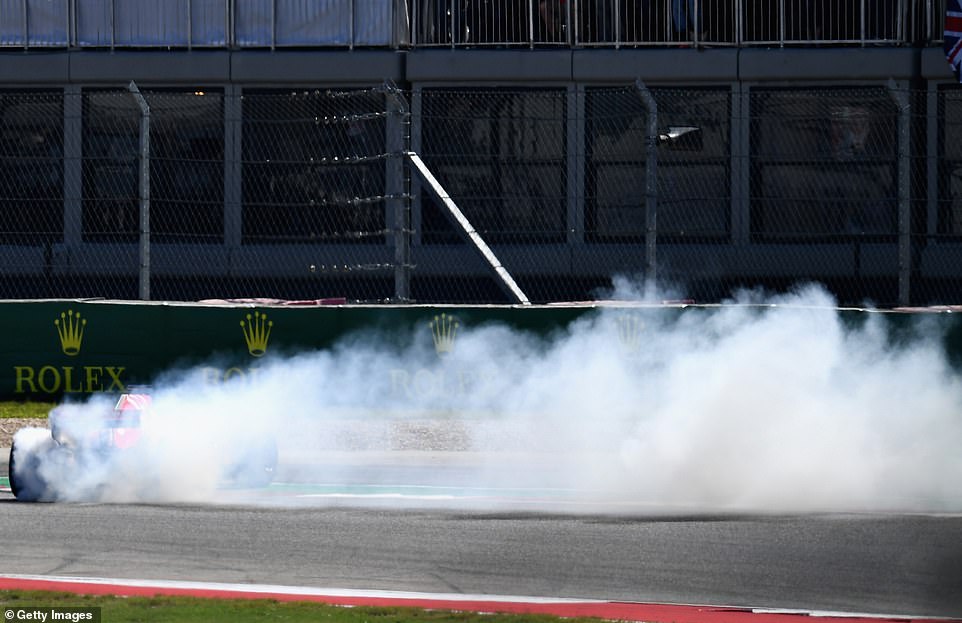 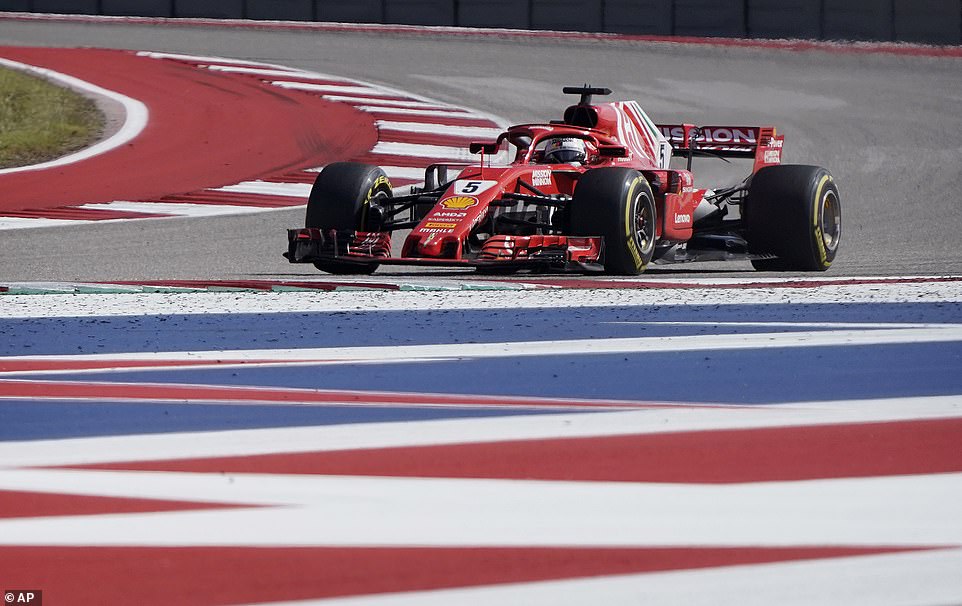 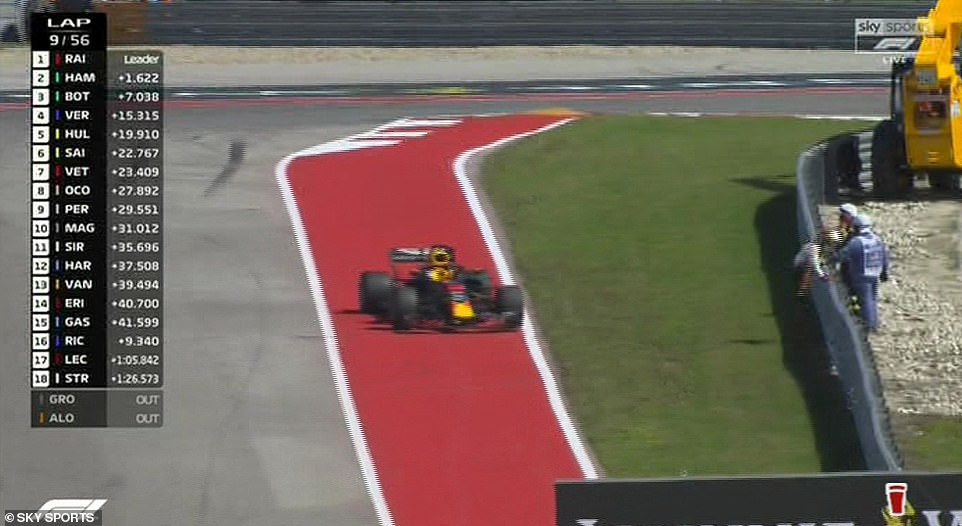 Raikkonen then peeled into the pits with 21 laps gone and Hamilton led for the first time since the initial seconds out of the grid box.

Easy street from now, then? Think again. Call your cardiologist. Hamilton’s tyres were soon going off, having been put on considerably early than the rest, on lap 11. He was haemorrhaging time to his nearest pursers, led by Raikkonen.

Would he be called in? Would he stay out and try to nurse them home?

Mercedes perhaps pondered on the questions a few laps too long, when it was clear he needed fresh rubber, PDQ. 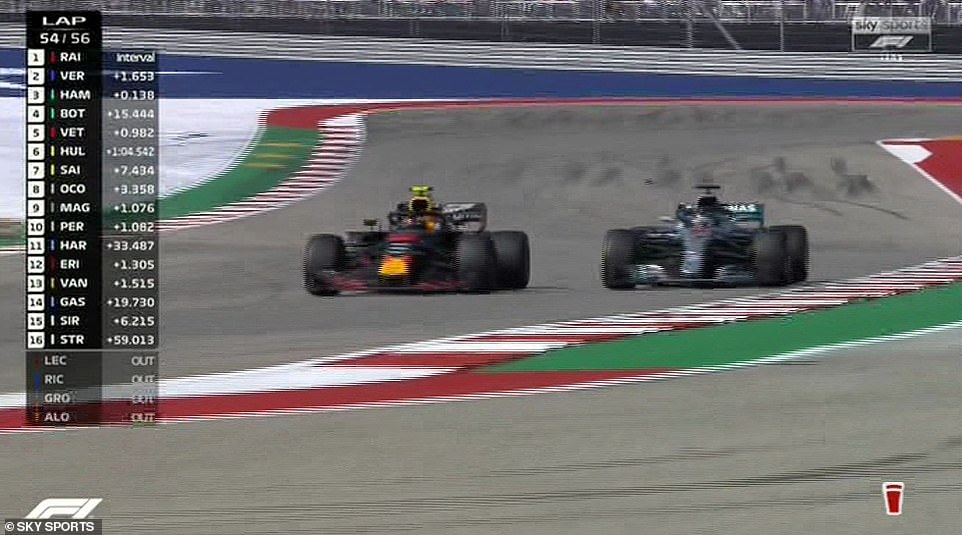 Needing second, at the time, to claim the title, Hamilton tried to pass Verstappen with three laps to go after the long straight 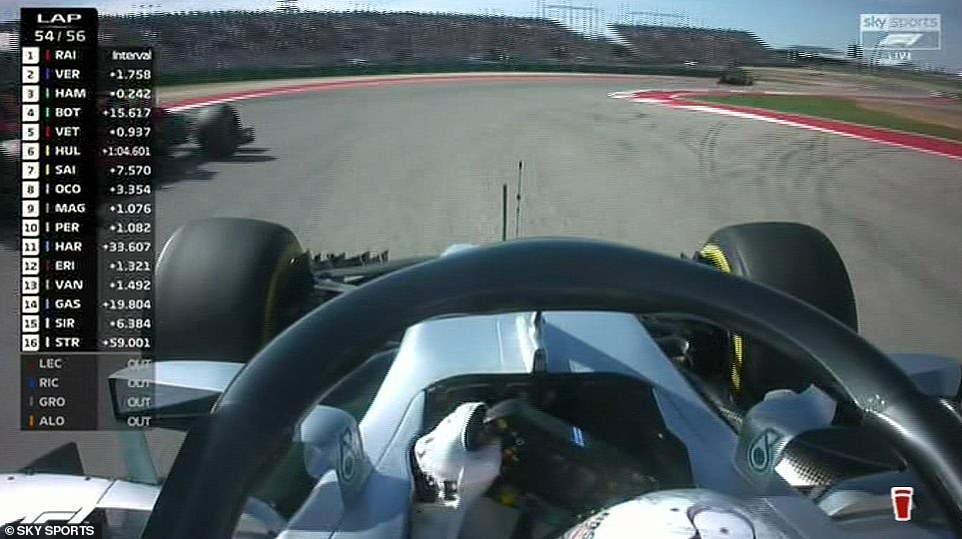 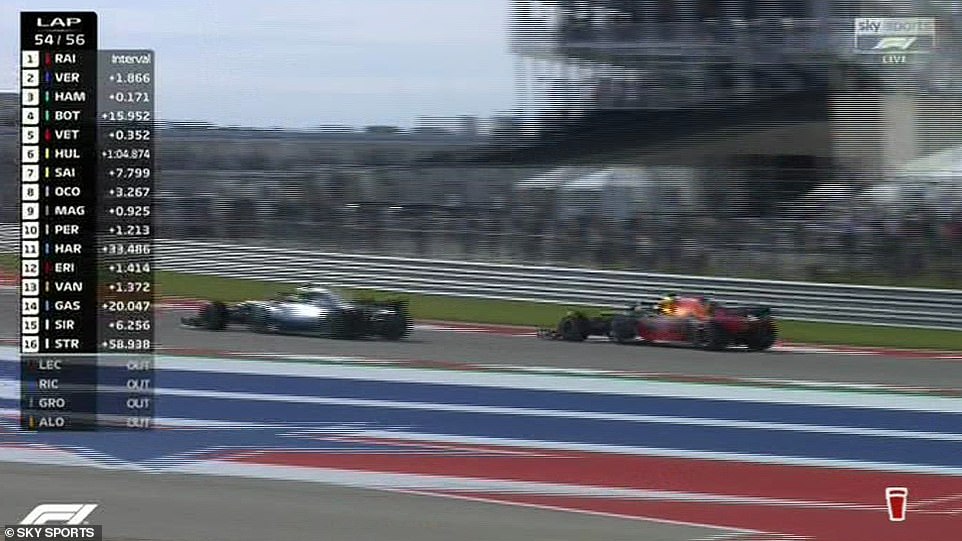 After staunch defending from Verstappen, Hamilton looked like he had got the job done just a couple of laps later 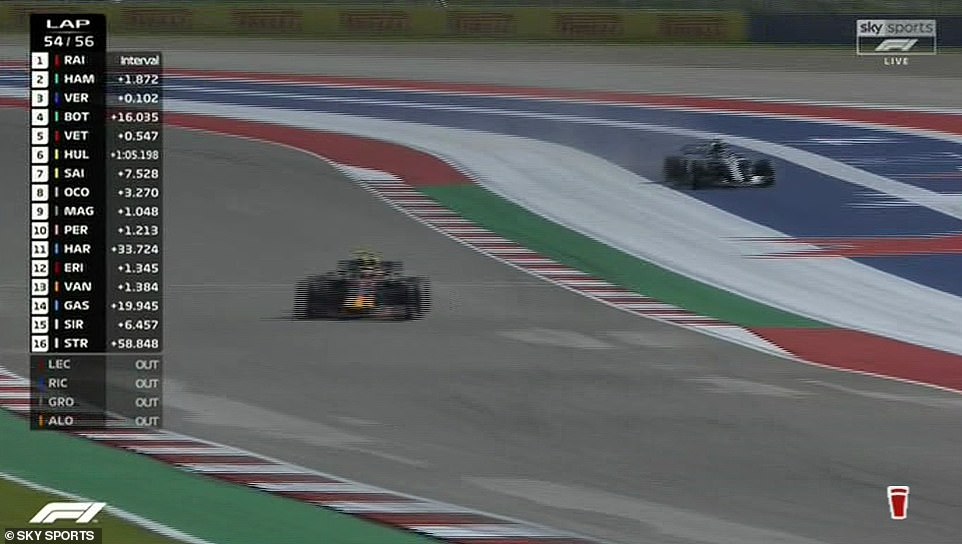 But the Brit ran wide off the circuit, allowing the Red Bull driver to get away and cement second place at Austin, Texas

Finally, he was in. And out for a 19-lap challenge. He had to close a 10-seconds gap to Red Bull’s Verstappen and a 12-second deficit to Raikkonen before the chequered flag was waved.

‘We need to give it everything now,’ came the instruction from race engineer Peter Bonnington.

‘How did Kimi get so far ahead?’ he asked his pit wall, fearing for his chances.

Meanwhile, Vettel was ever close to taking fourth again from Hamilton’s No 2 Valtteri Bottas – who was underperforming badly enough to call his usefulness in the Mercedes team into question.

For all Hamilton’s calm as signed autographs on his cheery way out of a Mercedes motorhome thronged by phone-touting fans, he felt every blistered part of his tyres, every fraction of a second gained and lost.

He got to within a second and a bit of Verstappen. The top three were like a train, Hamilton’s advantage of moments earlier dissipated. It was now a case of whether the tyres of the front two – Raikkonen leading the Dutchman with the Mercedes stalking them – would suffer on their older tyres to such an extent that Hamilton could pass them in the final moments. 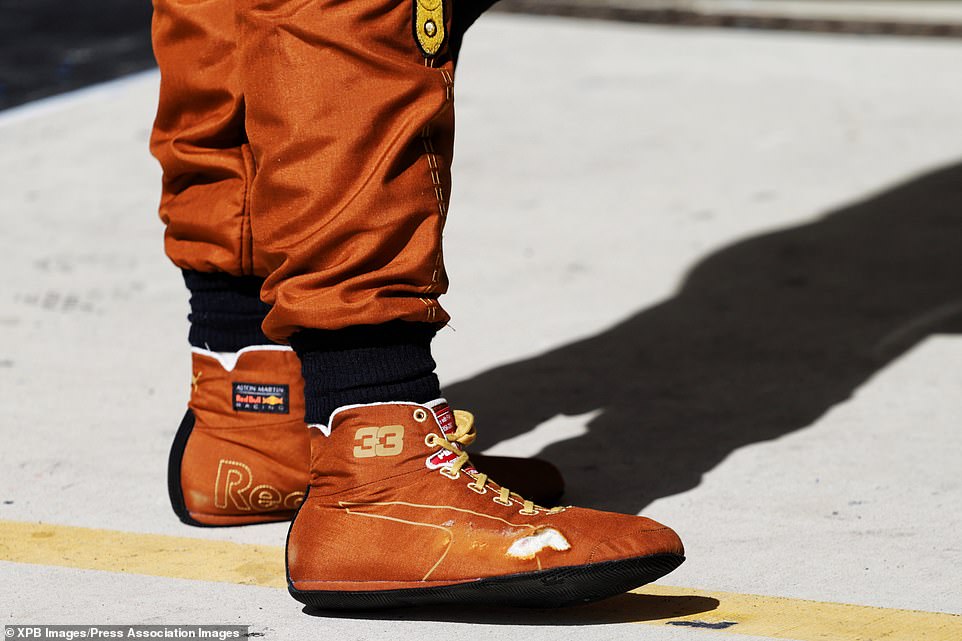 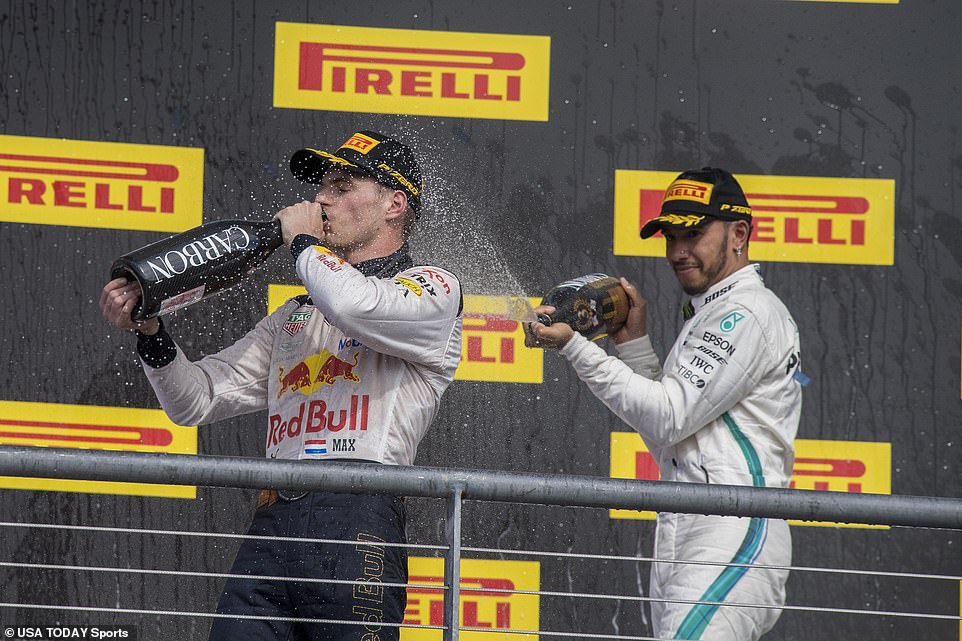 After their thrilling battle on the track, Hamilton soaks Verstappen with champagne on the podium after the race

In fact, he did not need to pass Raikkonen to take the title. He only had to pass Verstappen – and hope Bottas could play the role of adequate rear-gunner.

This was the distilled fight. And with five laps remaining, the Hamilton-Verstappen gap was less than a second. Hamilton gave it a go. Verstappen was up to the task. Moments later, Vettel passed Bottas and the drama went out of it.

A word in passing of congratulation to Verstappen, who started 18th after a gearbox problem in qualifying. The cream rose to the top in this race.

Raikkonen, victorious for the first time since Australia in 2013, became the oldest race winner since Nigel Mansell in 1994.

But still, finger by finger, Hamilton is getting his fingers around the trophy. 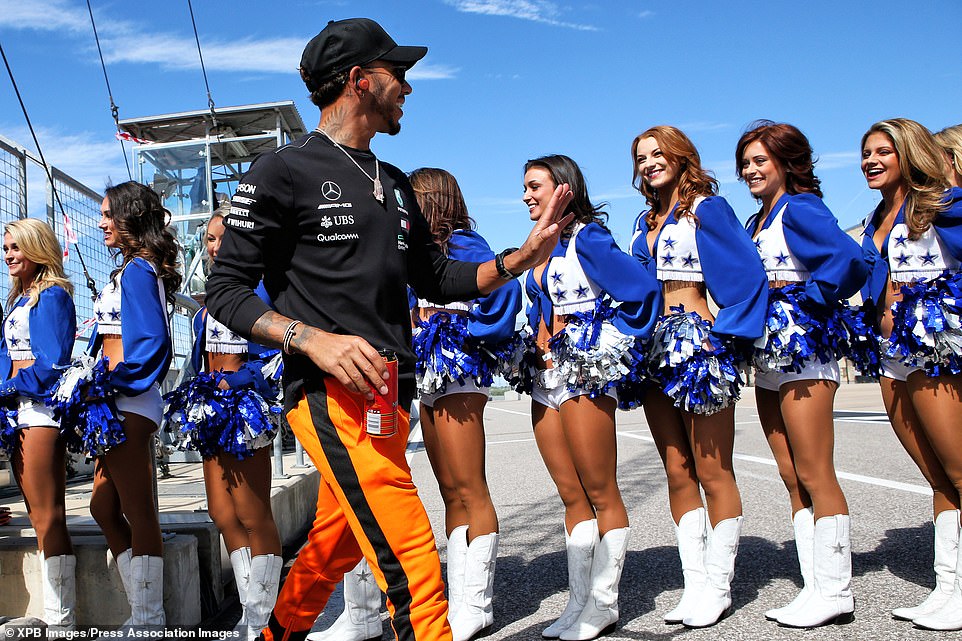 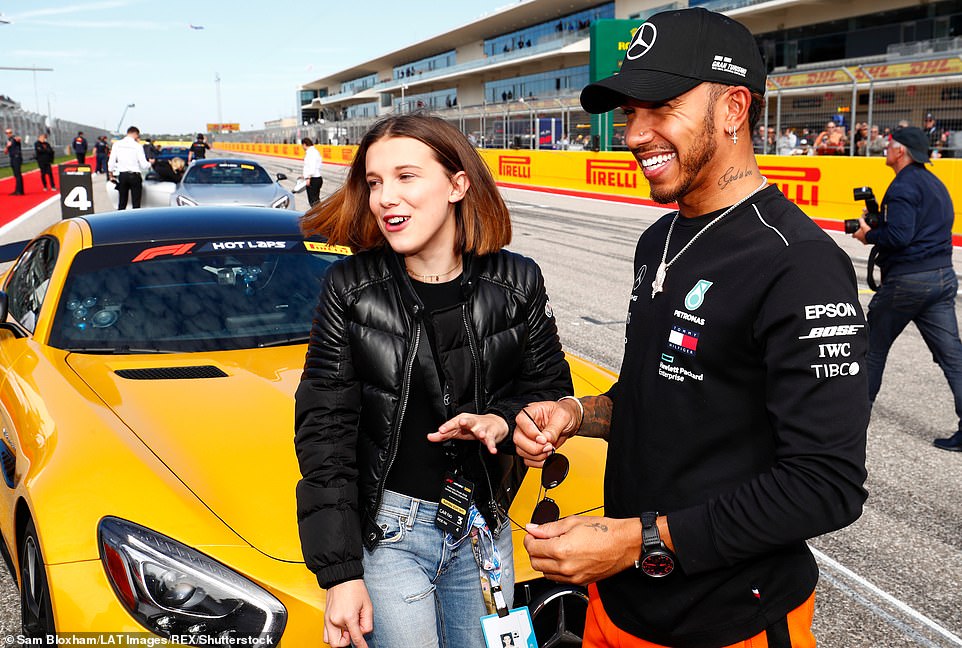 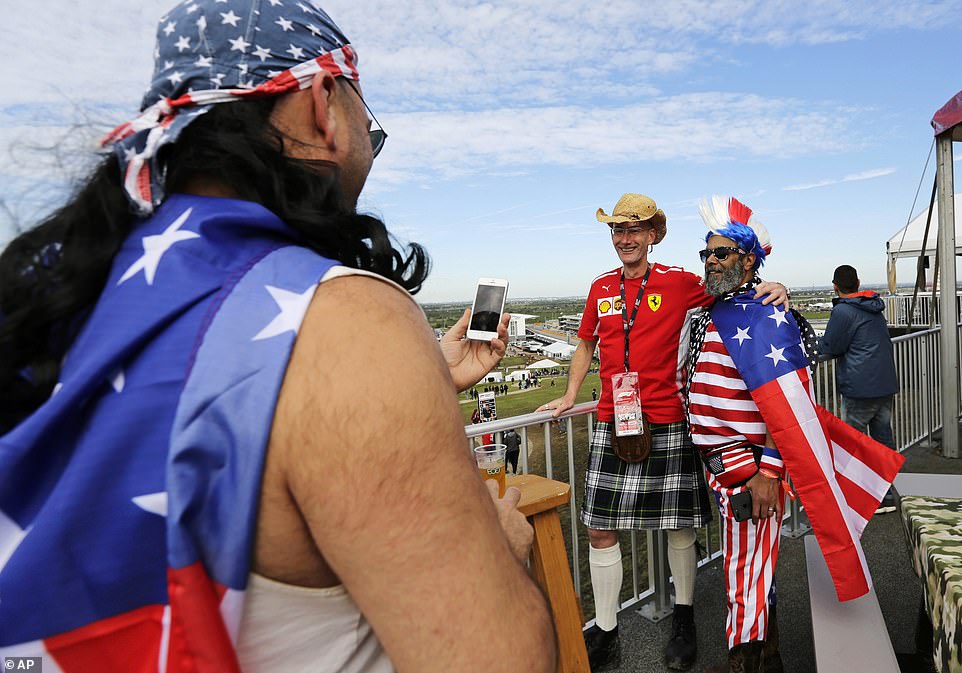