Lewis Hamilton has spoken of his sadness after Bernie Ecclestone’s comments on issues of racism and inequality, after the former F1 chief claimed black people are often more racist than white people. Formula 1 as an organisation has distanced itself from the former CEO’s controversial comments, which he made in a televised interview.

Hamilton has been widely celebrated for his efforts to improve diversity within the sport.

The six-time world champion, the only black driver in the history of the sport, has been vocal about his desire to end racial injustice within motorsport, and has called on his own experiences as proof of racism within F1.

He plans to create a commission to help increase diversity levels within motorsport and produce more opportunities for ethnic minorities, but Ecclestone bizarrely responded by claiming nothing would change.

In a televised interview with CNN, the 89-year-old claimed: “In a lot of cases, black people are more racist than what white people are.” 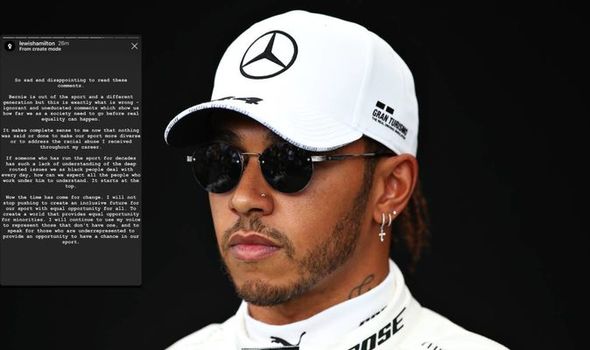 Hamilton has now responded to Ecclestone’s comments, stating that the former CEO has exhibited why there is such a need for change within the sport.

Writing on his Instagram story, the Mercedes star posted images of fans in blackface at races with the word ‘Hamilton Family’ on their t-shirts, as well as a lengthy message pleading for more acceptance for minority groups.

He captioned the image: “I remember this like it was yesterday. The damage things like this do to people is unacceptable.”

Hamilton also conceded that Ecclestone’s attitude shows why there has been no attempt to eradicate racism within the sport in the past, and that change must come from the top.

“So sad and disappointing to read these comments,” he wrote.

“Bernie is out of the sport and a different generation but this is exactly what is wrong – ignorant and uneducated comments which will show us how far we as a society need to go before real equality can happen.

“It makes complete sense to me now that nothing was said or done to make our sport more diverse or to address the racial abuse I received throughout my career.

“If someone who has run the sport for decades has such a lack of understanding of the deep routed issues we as black people deal with every day, how can we expect all the people at the top to understand. 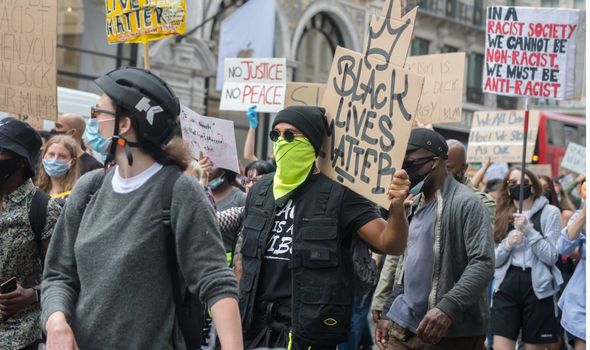 “It starts at the top.

“Now the time has come for change.

“I will continue to use my voice to represent those that don’t have one, and to speak for those who are underrepresented to provide an opportunity to have a chance in our sport.”

Hamilton has vocalised his support for protesters acting to take down statues of former slave owners, like with Edward Colston in Bristol.

But Ecclestone responded by saying they should be left in place, and argued that Hamilton’s commission will do little to enact real change within the sport.

He said: “I don’t think you’re gonna easily change people’s attitude. I think they need to start being taught at school. So they grow up not having to think about these things.

“I think it’s completely stupid taking all these statues down. They should’ve left them there.

“Take the kids from school to look and say why they’re there and what the people did and how wrong it was what they did.”

Formula 1 has distanced itself from Ecclestone’s opinions, and released a statement hours after the interview aired to publicly disagree with his comments.

The statement insisted that the 89-year-old’s comments have no place in sport, nor society as a whole.

“At a time when unity is needed to tackle racism and inequality, we completely disagree with Bernie Ecclestone’s comments that have no place in Formula One or society,” the statement read.

“Mr Ecclestone has played no role in Formula One since he left our organisation in 2017, his title Chairman Emeritus, being honorific, expired in January 2020.”