Charles Leclerc was harried and hustled all the way around Monza by Lewis Hamilton – but the rising star ultimately held on and ended up the triumphant hero of Ferrari and by extension of all Italy.

What a moment of jubilation it was for the ice-veined Monegasque, a 21-year-old in his first Italian Grand Prix wearing the most famous overalls in motor racing.

It was not easy, as we were saying, because he had the greatest driver in the world breathing right down his neck for most of this sprint around the Temple of Speed. That meant he spent the majority of the 53 laps with no let up, just an examination of his nerve. 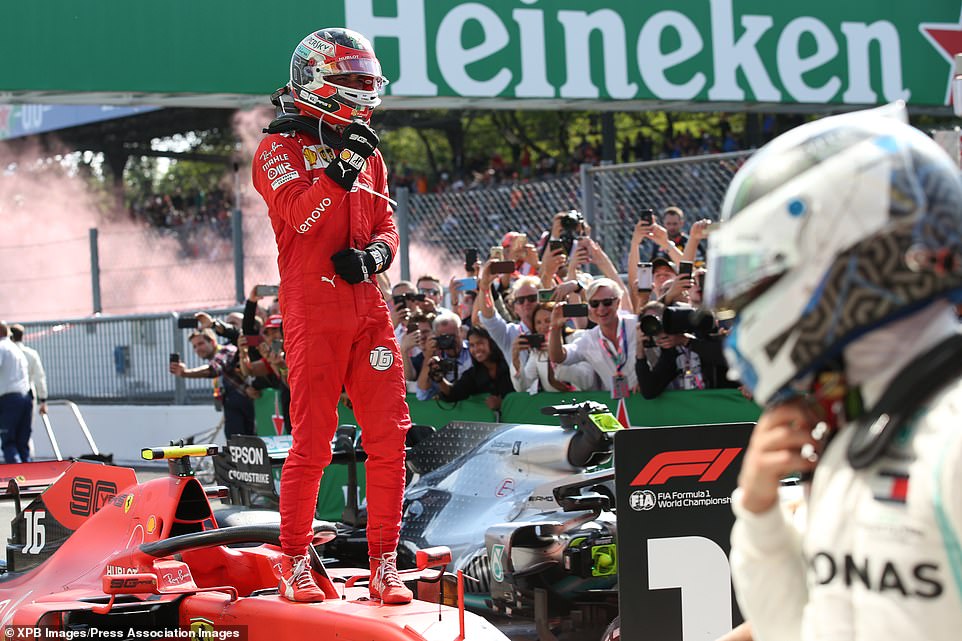 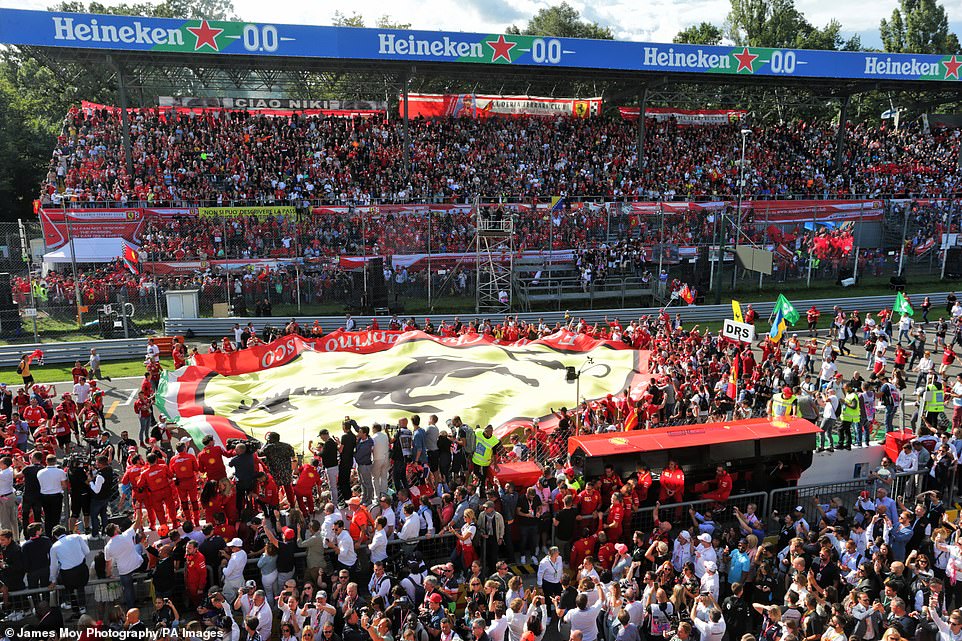 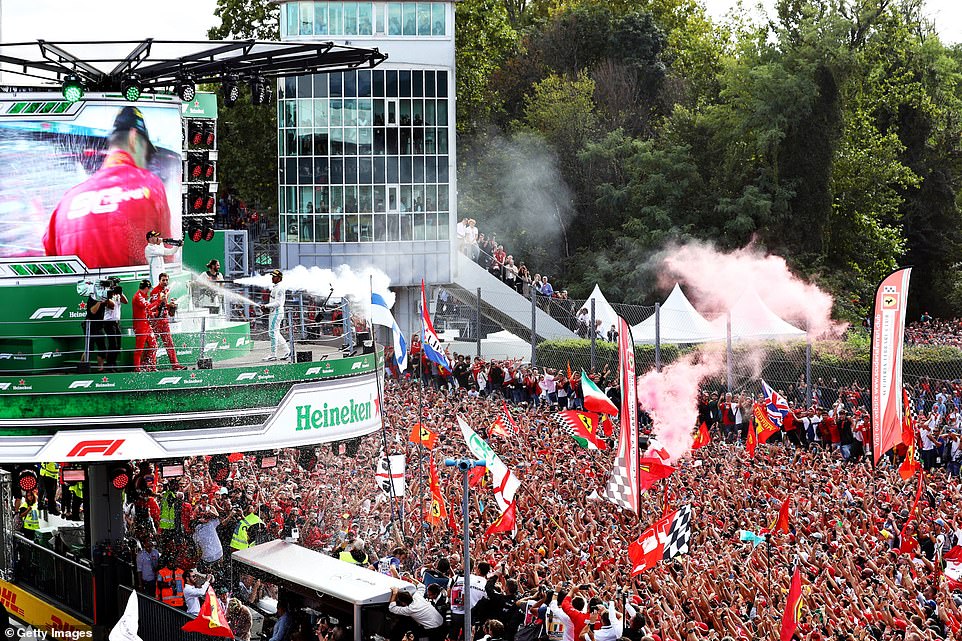 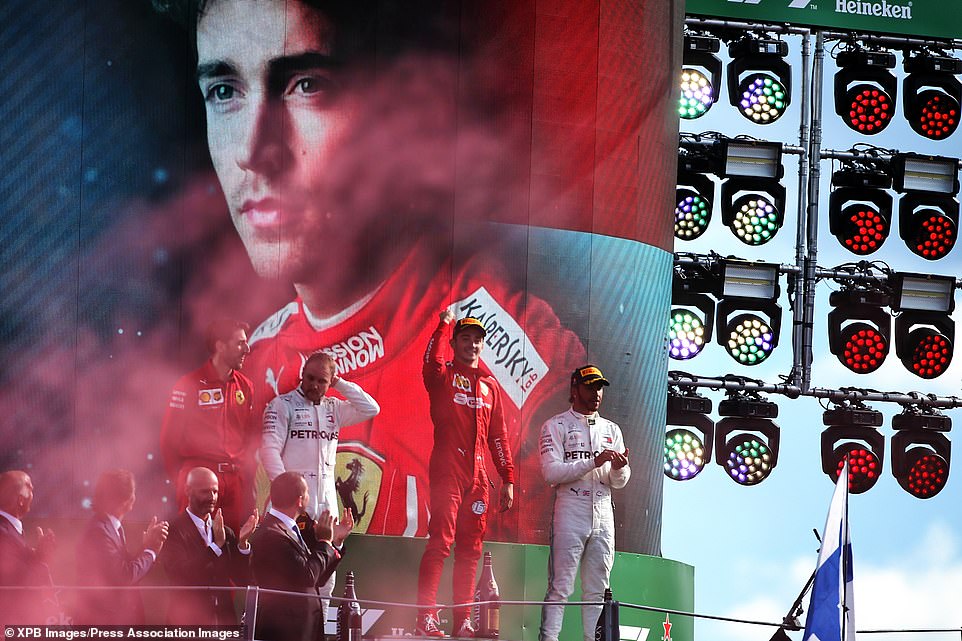 He won for the second time in eight days, following his maiden F1 glory in Belgium last Sunday.

It is not entirely right to say Leclerc was faultless. He ran straight on after locking up at the first corner on lap 36 but he wiggled back out in the lead. Hamilton was less than impressed, saying: ‘There’s some dangerous driving going on.’

The stewards decided – rightly in my view – that Leclerc gained no advantage and therefore let him race on unhampered by punishment. 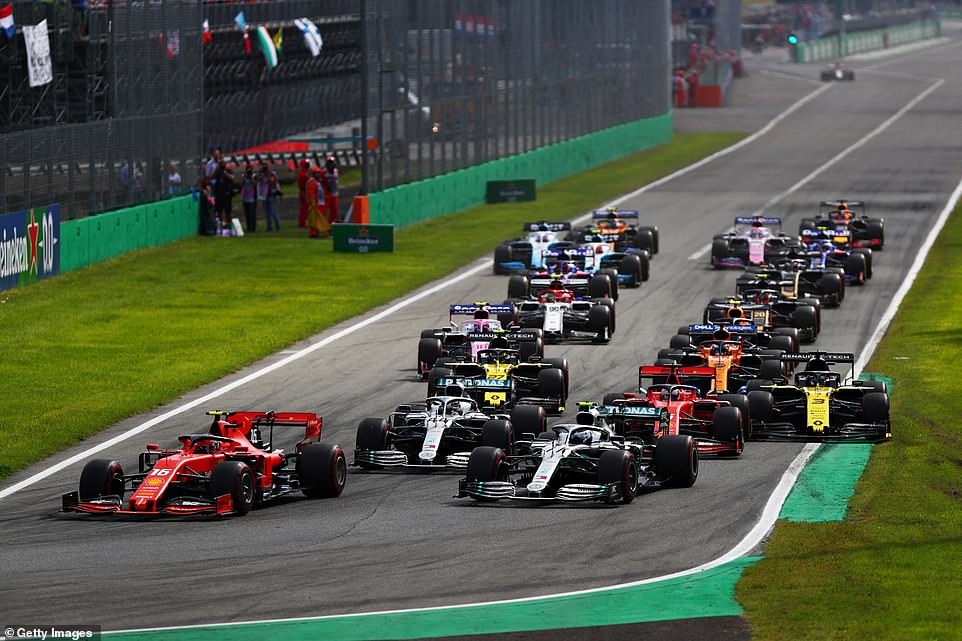 But despite trying to pass Leclerc, Bottas was repassed by Hamilton on the exit of the Rettifilo chicane on the opening lap

As if to show that Leclerc’s mistake was an understandable lapse, Hamilton also locked up six laps later. He lost second place to Valtteri Bottas, his Mercedes team-mate, as he went round the bollards and back on to the track. It finished that way: Lelcerc first, Bottas second, Hamilton third.

Hamilton, however, holds a huge 63-point lead over Bottas in the race for the title with seven rounds remaining.

Leclerc, who started on pole, held off a sustained Hamilton thrust in the middle third of the grand prix. The best of a long duel of machismo-soaked racing saw them side by side in the second chicane towards the middle of the action. Leclerc just squeezed Hamilton a touch and the Brit ran off, the floor of his car eliciting a plume of dust. 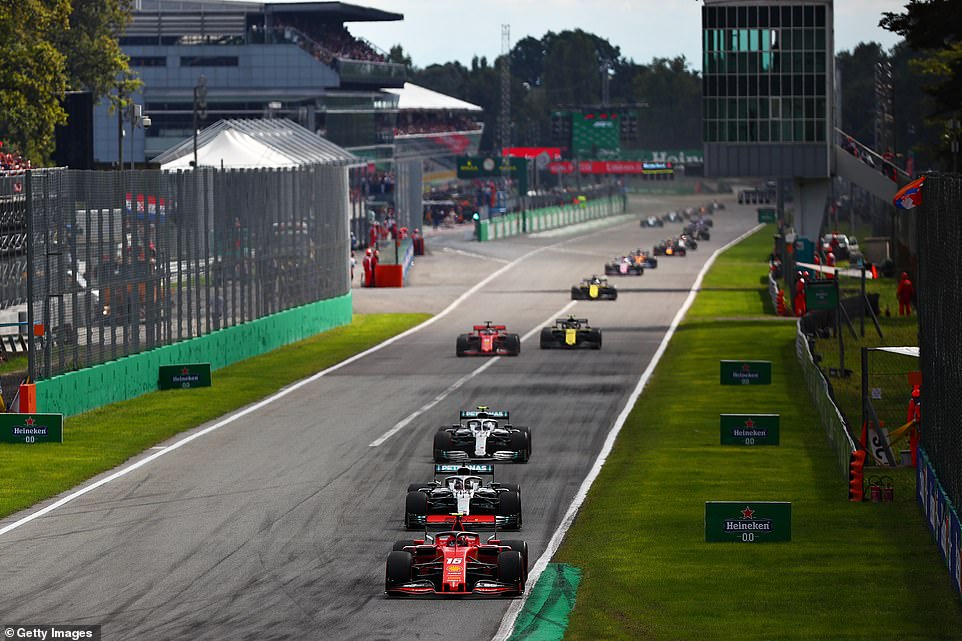 Leclerc, followed by Hamilton and Bottas, soon pulled out a gap to the rest of the field to set up the story of the race 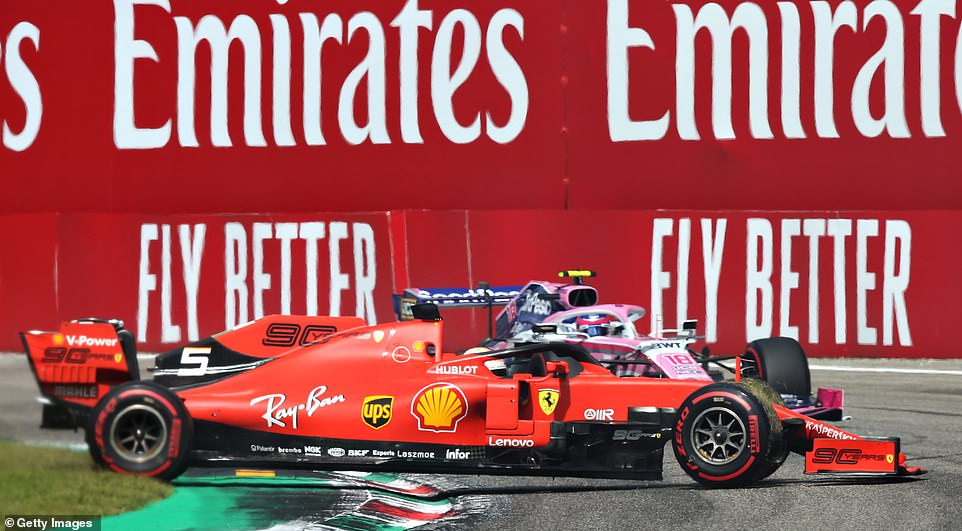 Vettel spun under no pressure from fourth place at the Ascari chicane, before rejoining the track unsafely 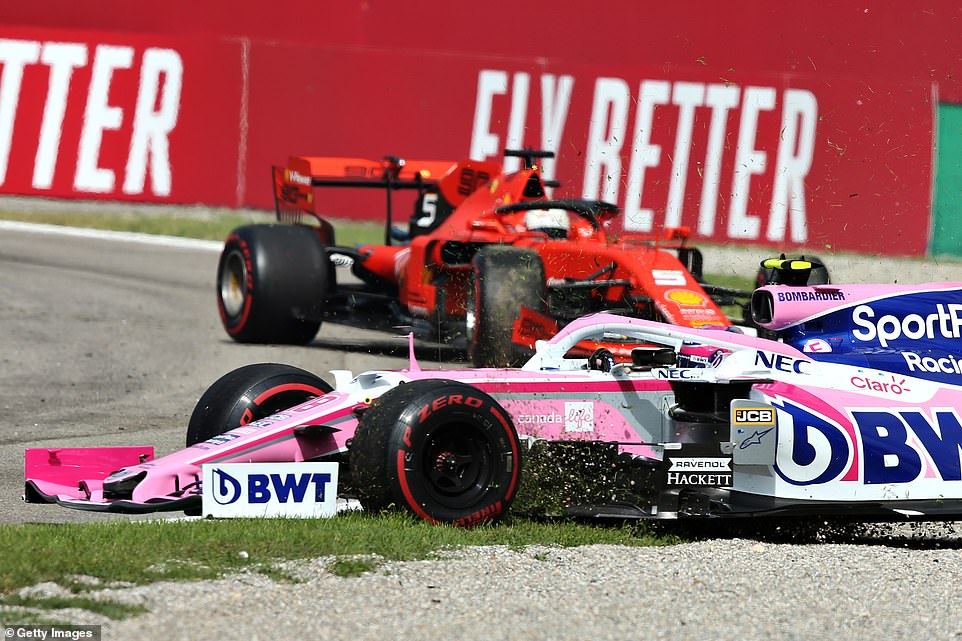 ‘He didn’t leave me a car’s width,’ said Hamilton. ‘He put me off.’ I agreed. So did the stewards, sort of. They awarded the Ferrari man a black and white flag – F1’s equivalent of a yellow card – for unsporting behaviour. That seemed about right.

Leclerc’s brilliance was in stark contrast to Sebastian Vettel, the supposedly senior man at Ferrari. He spun off early on at the Ascari chicane and then returned to the track carelessly, forcing Lance Stroll’s Racing Point off. The German was handed a 10-sec stop-go penalty, one of the most severe punishments open to the stewards.

His ignominy was endless. He was lapped while tootling around in 15th place.

Leclerc was attacked by Bottas in the final stages but could not be budged. 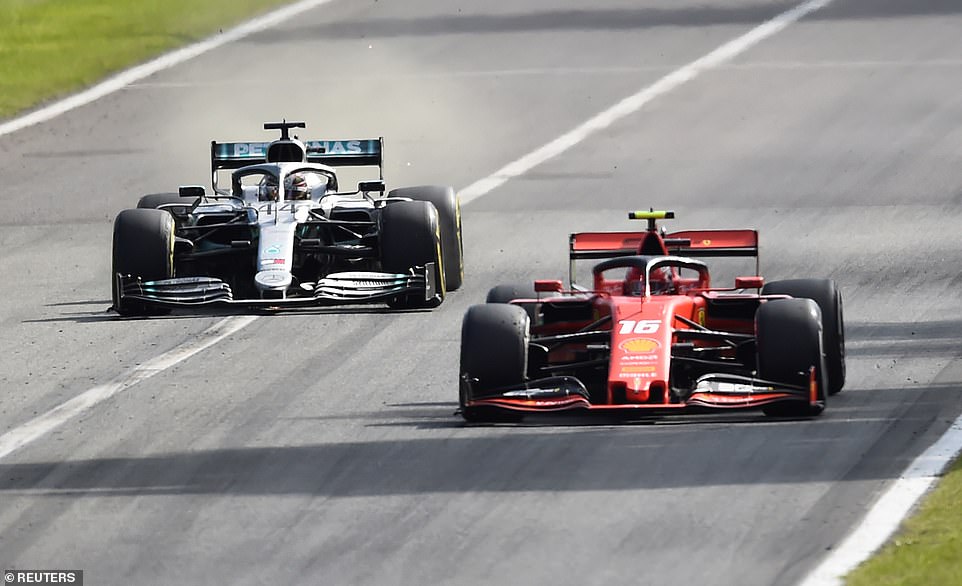 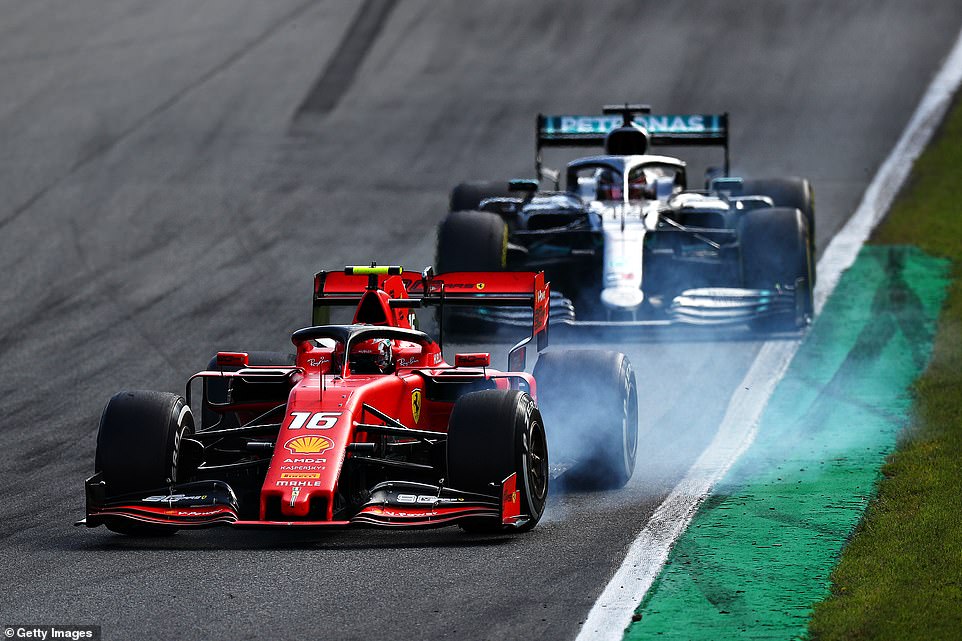 Under intense pressure from Hamilton, Leclerc locks up his left front wheel heading into turn one 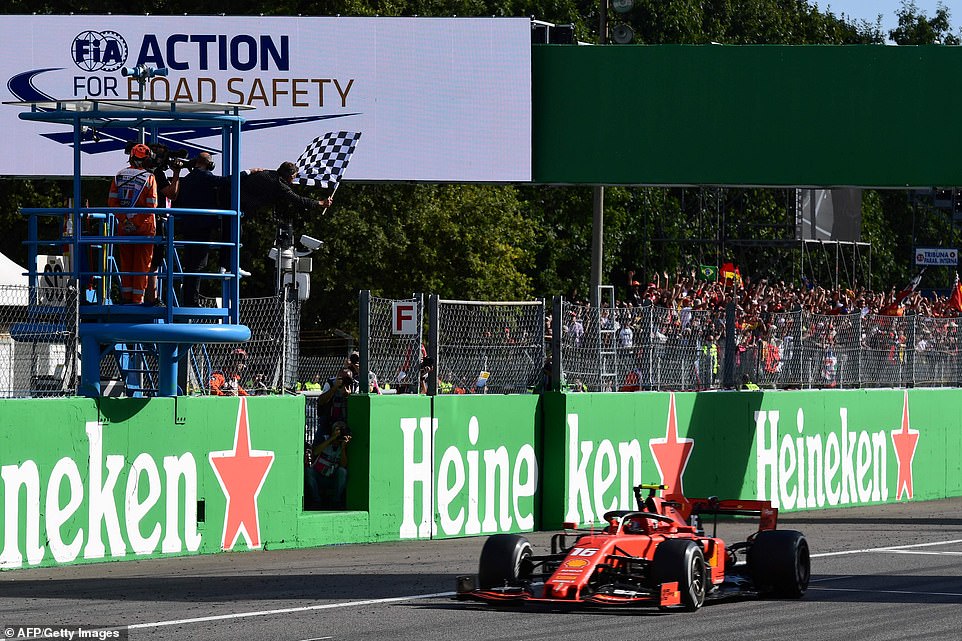 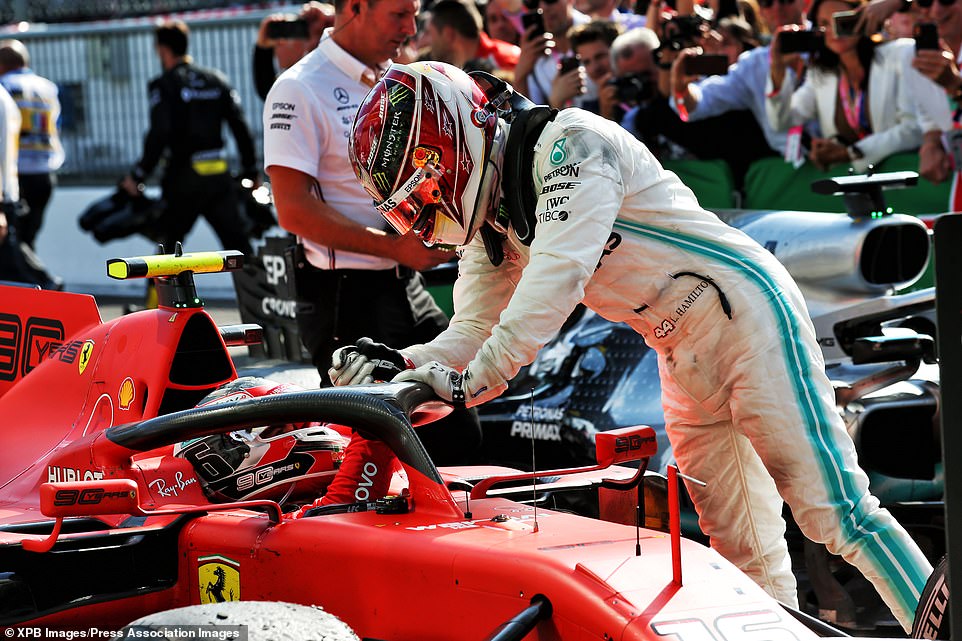 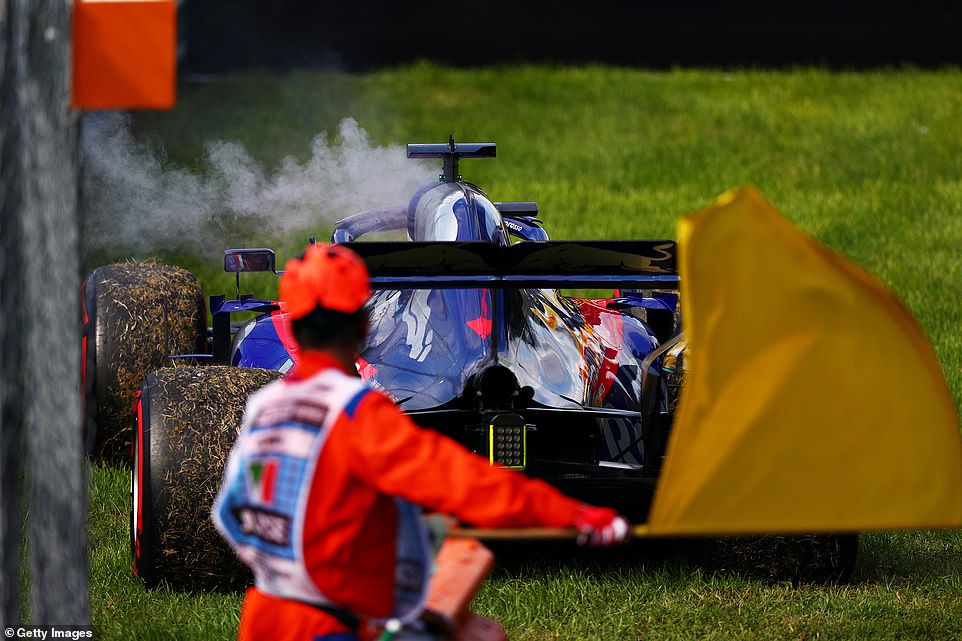 Daniil Kvyat pulled over at turn one for Toro Rosso after his Honda power unit failed, bringing out the virtual safety car