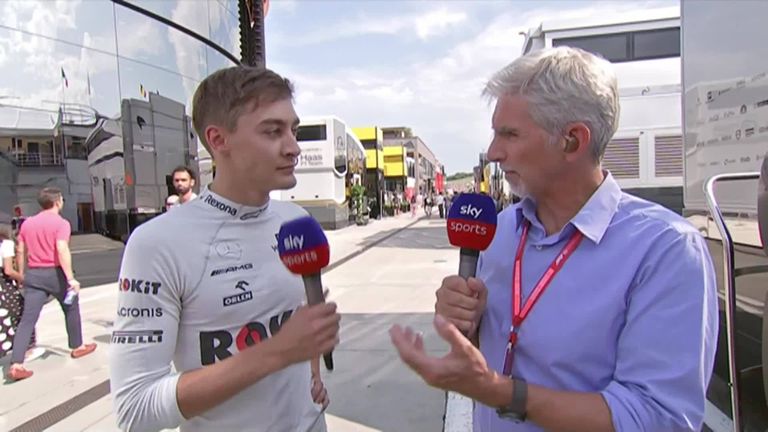 British rookie George Russell further enhanced his growing reputation in Formula One on a milestone day of qualifying at the Hungarian Grand Prix.

Russell did his chances of racing alongside Lewis Hamilton at Mercedes next season no harm after delivering his best qualifying result of the campaign at the Hungaroring.

The 21-year-old missed out on Q2 by just 0.05s – but it was the Englishman’s latest impressive showing for the below-par Williams team this year, and he delivered both his and the British outfit’s best qualifying time on Saturday.

Russell finished 16th, putting his Williams above both Racing Point drivers Lance Stroll and Sergio Perez – and the Renault of Daniel Ricciardo.

“It was unbelievable, I’m almost lost for words,” he told Sky Sports.

Quali day – time to put our backs into it! ??#F1 #HungarianGP ?? pic.twitter.com/qNXJGmcTyR

“There’s been so much work behind the scenes to make the aero and the correlation better, and it’s been a long process.

“We brought the update to Germany, but there were a number of reasons why we weren’t quick there.

“This was the first true test, and regardless of the outcome tomorrow we can go into the summer very pleased.” Most glaringly, Russell was also 1.3 seconds faster than Robert Kubica in the sister Williams, extending his record over the Pole to a perfect 12-0 over one lap.

Russell is on the books at Mercedes and his impressive displays will provide team principal Toto Wolff with something to think about over the summer break as the sport’s all-conquering constructor determine whether to retain Valtteri Bottas for another year.