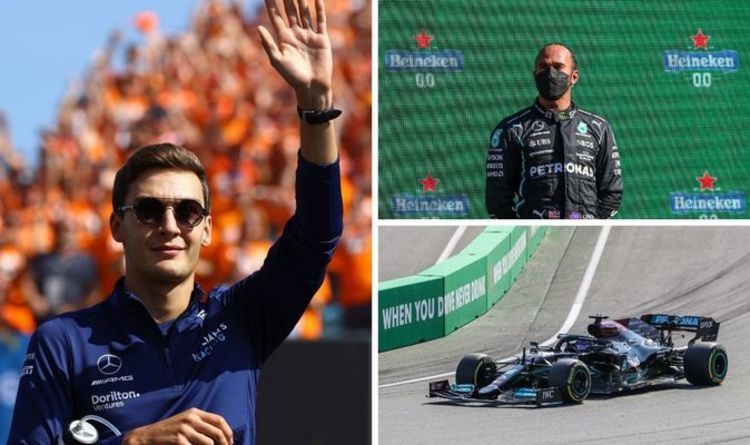 Mercedes new boy George Russell has recalled his first meeting with Lewis Hamilton when he was just 11 years old, describing his future team-mate as a ‘superhero’. Russell was confirmed as Hamilton’s new partner at Mercedes after Valtteri Bottas signed for Alfa Romeo.

Bottas’ departure to replace the retiring Kimi Raikkonen opened the door for Russell to sign with the Silver Arrows and form a tantalising all-British line-up next season.

The 23-year-old told the story of his first meeting with Hamilton, when he was an aspiring karter who simply wanted an autograph from Hamilton back in 2009.

Russell looks back on the day – a Formula Kart Stars event – with fond memories ahead of joining forces with the seven-time world champion in 2022.

“When you’re a child at that age and you meet an F1 driver, you don’t think those people are human

“That was a really special moment for me.

“I even remember it now, which is quite odd to remember a memory from when you were 11 years old.”

Russell also revealed that meeting Hamilton on that day 12 years set the wheels in motion for his own journey to Formula 1.

He realised he wanted to be an F1 driver, a dream that became reality when he signed for Williams.

After three years at the famous British team, Russell will now join Mercedes – the reigning world champions and dominant force in the sport for most of last decade – next year.

“It’s pretty surreal to be lining up alongside him next year,” the young Brit added.

Hamilton took to social media to welcome the news that Russell was joining him at Mercedes, posting a message along with a photo of the two at the McLaren factory in 2010.

“I want to take a moment to welcome George Russell to the team,” the 36-year-old wrote on Instagram. “I remember when he was young, dreaming of one day being a Formula 1 driver.

“I’d only just reached my own dream of becoming an F1 driver, so I know what this day means and how it will feel for him. He is a great example to all the kids out there that dreams do come true when you chase them wholeheartedly.

“Through hard work he has rightly earned his spot on our team. I look forward to seeing him grow as a driver with this great team and working with him to raise Mercedes higher. See you next year.”

The meeting at Monza is the third race of a triple-header within the F1 calendar after the Belgian Grand Prix and the Dutch Grand Prix at Zandvoort occurred over the last two weekends.

September 9, 2021 F1 Comments Off on George Russell opens up on meeting ‘superhero’ Lewis Hamilton for first time at 11
NFL News