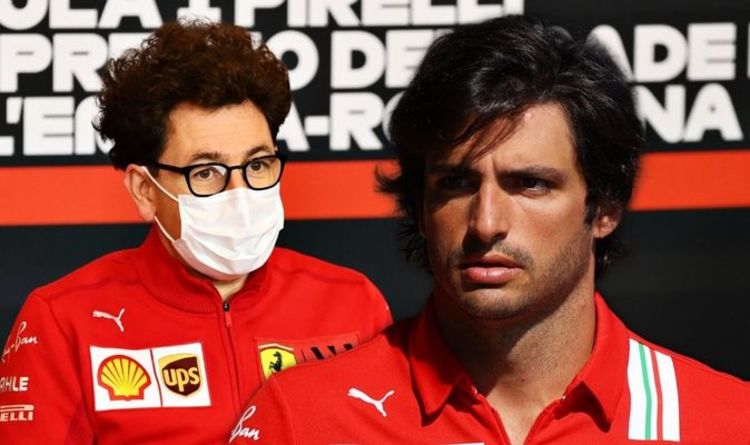 Carlos Sainz is set to be rewarded for his fine form in his first season racing for Ferrari with a new contract. The Spaniard’s current deal with the Prancing Horse is due to expire at the end of this year.

Sainz raised eyebrows when he chose to leave McLaren to join Ferrari for the 2021 season.

Alongside Lando Norris, he had helped the Woking-based team to beat all their midfield rivals in the constructors’ championship.

Ferrari, on the other hand, had endured one of the worst seasons in their history and looked a shadow of the F1 powerhouse they once were.

But the history and prestige of the famous red cars had tempted Sainz to switch, and as it turns out it was an inspired call.

Despite McLaren again doing well in the first half of the season, Ferrari’s performance upgrades after the summer break were too much for their rivals to handle.

The Maranello team roared past and finished comfortably in third place, behind the runaway leaders Mercedes and Red Bull.

JUST IN: Lewis Hamilton admitted move to Ferrari is ‘a goal to be achieved’

Sainz was central to that, even outscoring team-mate Charles Leclerc in the end to claim fifth in the drivers’ standings – the ‘best of the rest’ of all the drivers not in one of the fastest four cars.

He scored four podiums to help him achieve that, including an impressive third-placed finish in the Abu Dhabi finale which went under the radar amid all the title race controversy.

Sainz proved himself a more than capable replacement for outgoing four-time world champion Sebastian Vettel, and now Ferrari bosses are keen to extend his stay with the team.

His current deal expires after the 2022 season, but team principal Mattia Binotto has said the team is working to change that.

“As we said I think in the last race, we will discuss through the winter time the extension of his contract,” the Italian told reporters in his end-of-season media chat.

“We’ll sit down with time and try to understand. Certainly I think he did very well during the season.

“So no doubt that we’ll sit down and try to find an agreement. That will be part of the winter period.”

In Sainz and Leclerc, Ferrari can count upon two dependable drivers who can deliver success in the right car.

The team’s sporting director Laurent Mekies said as much at the final race of the 2021 season in Abu Dhabi, when he declared the partnership to be “as good as it gets”.

Leclerc is contracted for another three seasons, having signed a historic five-year deal at the end of the 2019 campaign.

Binotto is confident negotiations to ensure Sainz sticks around longer to be his team-mate will go ahead without a hitch.

“I would like to sit down with him, I’ve not started yet the discussion with him,” he added.

“I don’t know what he’s got in mind as well as him, Carlos, as a driver. So today, there is not an answer to that.

“First I would like to understand how he’s pleased, have a review of him with the season and look together to the future.

“It will be, I think, an easy discussion, no doubt. But so far we have not started, so I have no answer for you.”