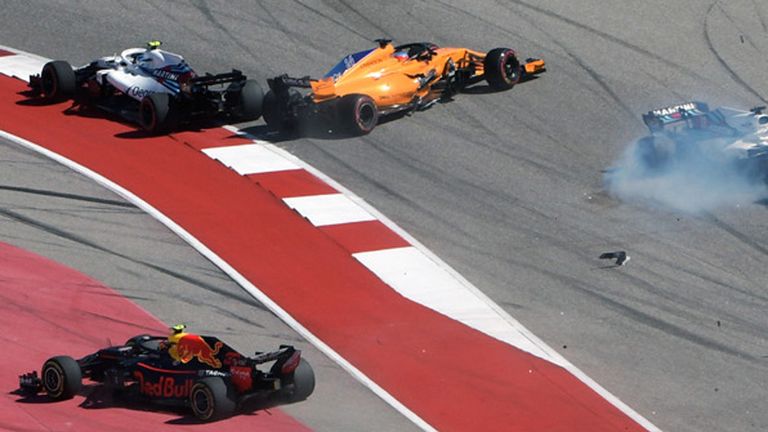 Fernando Alonso has rowed back on his criticism of his fellow F1 drivers after complaining “there are more amateurs here than in any other series”.

The McLaren driver’s outburst occurred after he was shunted out of the United States GP on the first lap in an incident which the stewards blamed on Lace Stroll, handing the Williams driver a drive-through penalty.

While not specifically signalling out Stroll, Alonso said immediately after the race: “The level seems lower than ever. It’s a misjudgement of speed and distances, which is quite strange to see.

“Nobody tried to hit anyone on purpose. Three cars were trying to overtake each other in a very strange point. It was very optimistic on the first lap.” Then, citing his recent involvement in the World Endurance Championship series, Alonso added: “It is more a problem for the FIA if they keep allowing this type of driving. I drive in another series with amateur drivers, theoretically, and there has never been a problem.

“There are more amateurs here than in other series.”

But Alonso reined in his criticism later on Sunday when he tweeted: “Disappointed race. Only 600 meters before getting hit from behind. Watching now the replays not much anyone could do, too many cars together into T4.”

Disappointed race. Only 600 meters before getting hit from behind. Watching now the replays not much anyone could do, too many cars together into T4 ?‍♂️. Just that?. Just unlucky today. Now focus, preparation, and let’s hope this brings a nice result in Mexico next week.

Stroll, meanwhile, said of the clash: “I saw a gap and went for it, but I don’t think he really saw me and turned in. After that my race was finished as I got the drive-through and that was that. I haven’t seen the footage, but I think it was a racing incident.”

Alonso has confirmed he will leave Formula 1 at the end of the season.