The threat of rain has not disappeared so quite a few cars quickly out of the garage to cover their bases at the start of this 15 minute session.

The driver who has been quickest in Q2 has NOT taken pole position since Silverstone, 9 races ago. Beware false indicators…. #MexicoGP ??

Mercedes draw first blood in qualifying. Red Bull’s massive Friday advantage seems to have been closed by Mercedes at the very least.

Bottas ends the session P1 with a new track record ?

Mercedes have stuck the hypersoft tyre on now and Bottas has taken full advantage of that new engine as he goes fastest with a 1:15.580 – less than a tenth quicker than Hamilton.

Teammate Hamilton joins him at the top in second#MexicoGP ?? #F1 pic.twitter.com/qB5fV1ocgn

All the big hitters seem through to Q2, so who is on the brink? With just over three minutes left, Stoffel Vandoorne, Kevin Magnussen, Lance Stroll, Sergey Sirotkin and Fernando Alonso, who has yet to set a time, are in the elimination zone. Romain Grosjean of Haas is on the bubble by a tenth.

It’s Red Bull who we need to watch this weekend though – and both storm into one and two as Max Verstappen edges out Daniel Ricciardo by a tenth with a 1:15.756.

Hamilton and Bottas are three and eight tenths down on Vettel respectively, but don’t forget they are on the slightly slower tyre – the ultrasofts.

That deficit does not matter at this point, in fact their times are a case of job done as there is no way they will drop out the bottom five with that sort of pace. 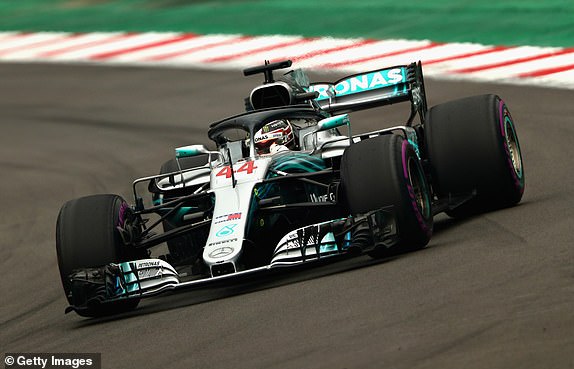 All the drivers have gone out on the softest tyre, the hypersoft, with the exception of Mercedes who have opted for the slightly more durable ultrasofts.

Sebastian Vettel sets a 1:16.089 early on and that is a new track record already.

‘There is a possibility of rain to come later in the session. Vettel needs to be right up at the front to stand a chance tomorrow of thwarting Hamilton.’

Overcast conditions at the track. There is a 40 per cent chance of rain at some point in this session as Pierre Gasly becomes the first car out, followed by both Mercedes and Kimi Raikkonen.

Q1 is underway in Mexico! Gasly is first to hit the track

What Lewis Hamilton needs to do to win the Formula One world championship at the Mexican Grand Prix?

PATRICK BOYLAND: Lewis Hamilton is within touching distance of winning his fifth Formula 1 world title this weekend at the Mexican Grand Prix.

Indeed, with the 33-year-old Briton leading fierce rival Sebastian Vettel of Ferrari by a whopping 70 points in the standings with just three races to go, it now seems a matter of when and not if he regains his world championship crown.

Sportsmail takes a look at the various permutations ahead of Sunday’s race in Mexico City. 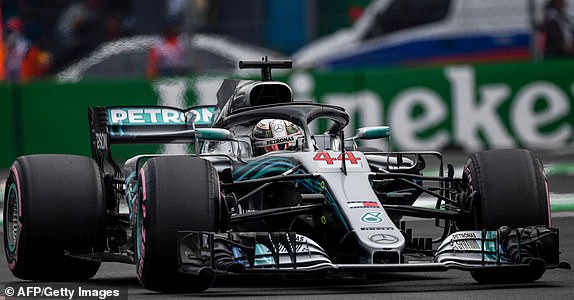 Bottas’s car will not be ready for the start of qualifying due to the engine change, but he is set to be cleared to go three minutes in. More than enough time to get a lap or two in.

Just one penalty to be notified of. Pierre Gasly will start from the back for Toro Rosso following an engine change and gearbox change.

But if it does not happen today his best chance of achieving it would have passed. Up for grabs is the youngest ever driver to land a pole position.

Sebastian Vettel currently holds the record at 21 years and 72 days old, while Verstappen will be 21 and 27 days old when he competes in qualifying.

That means the Red Bull driver has just three races to break the record and with Brazil and Abu Dhabi set to favour Mercedes and Ferrari – this really is his last chance realistically to snatch that stat from the German. 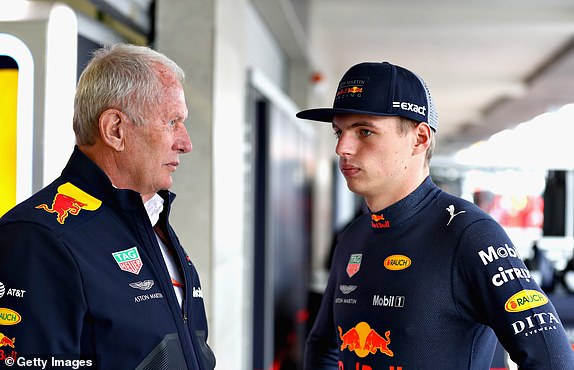 It’s been back on the calendar for a good few years now, but here are some stats and facts on the Mexican Grand Prix – with thanks to gentingbet.com

The final 60 minutes of practice in Mexico, in bite-size form

The bad news is he has been forced into an engine change for qualifying. The good news is it is a brand new engine, so not only does he suffer no penalty but it is also a slight upgrade on the one it has replaced.

UPDATE: We will change @ValtteriBottas’ engine ahead of #Quali. He was running PU3 this weekend, but will now swap to PU4 – therefore no penalty. #MexicoGP ?? #F1 pic.twitter.com/wFVcXYqiGY

Mercedes were given a scare in final practice for the Mexican Grand Prix after Valtteri Bottas suffered a hydraulic failure in a session topped by Max Verstappen.

Bottas’s team-mate Lewis Hamilton goes into the weekend needing just a seventh place to claim his fifth world championship but will be concerned with the reliability of his Silver Arrows following the Finn’s misfortune.

‘The engine just stopped and I got this [hydraulic] warning, Bottas told Sky Sports ‘We need to investigate issue, we hope it’s a small thing. 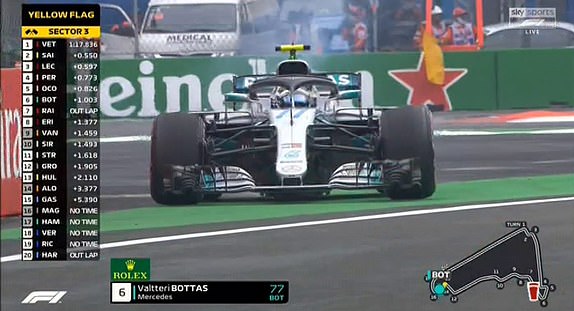 He just missed out on claiming the championship in the United States last time out, but Mexico will be a much more realistic prospect for Hamilton who only needs to finish seventh to win his fifth title.

The Brit isn’t about minor finishes though so you can bet he will target pole position as I welcome you to live coverage of qualifying for the Mexican Grand Prix. 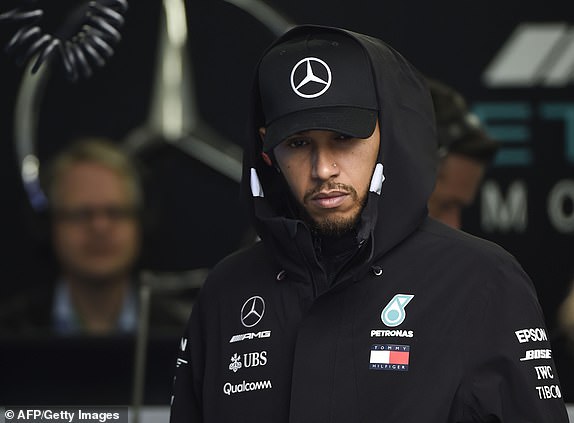 Lewis Hamilton is edging closer to a fifth world championship but will look to seal the crown in style at this weekend’s Mexican Grand Prix.

The Brit only needs to finish seventh at the Autodromo Hermanos Rodriguez to retain the title and will be hoping to secure pole position in qualifying to maximise his chances of achieving that in Sunday’s race.

But it is Red Bull and Max Verstappen who were quickest in the practice sessions, with Hamilton’s title rival Sebastian Vettel also going quick for Ferrari. So follow all the action from what promises to be a thrilling qualifying session as it happens.

If you are using the app, please click here to view today’s live blog