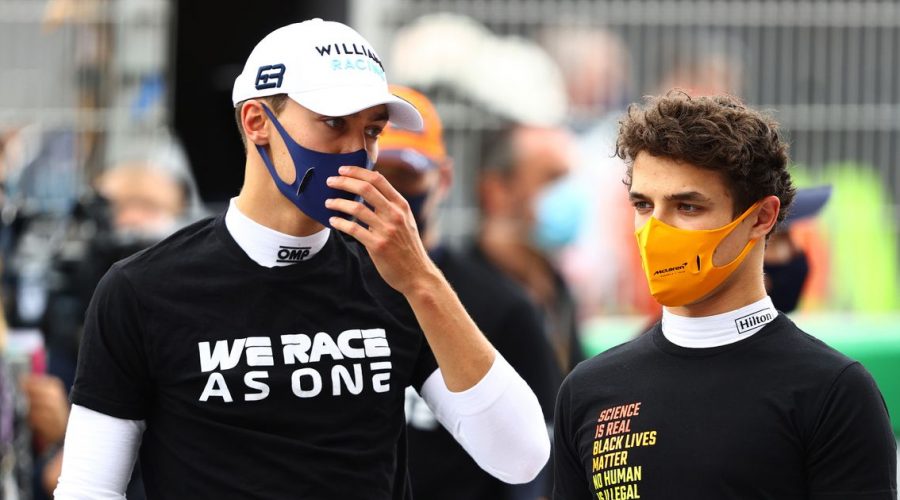 Lando Norris and George Russell have been backed to carry the torch of British drivers in Formula 1 for years to come by following Lewis Hamilton's path to becoming future world champions.

Emerson Fittipaldi, the two-time former world champion in 1972 and 1974 with Lotus and Marlboro, believes Britain have two stars in the making in Norris and Russell after observing their meteoric rise in Formula 1.

The highly-rated pair are set to line up on the grid for this weekend’s British Grand Prix, with a sell-out crowd expected at Silverstone after the Government gave the green flag to hosting a full capacity.

There are thought to be around 140,000 spectators attending the three-day event and the vast majority will be cheering on Norris, Russell and Hamilton at their home race.

While Hamilton remains the star attraction with seven wins at the circuit and 98 overall, neither Norris nor Russell have tasted victory in the sport yet.

However, Norris is enjoying his finest season in F1 to date with three podium finishes from the first nine rounds and qualified on the front row for McLaren in Austria, becoming the first driver to do so for the team since Brazil 2012.

Hamilton himself recently praised Norris during the race, describing his rival as “such a good driver” after defending valiantly and later passing him on the track for third position.

And Fittipaldi — who raced for McLaren, Lotus and Fittipaldi Automative in his illustrious racing career — has been taken aback by their form and singled out 21-year-old Norris for doing an “incredible job”.

“Both Norris and Russell have impressed me a lot, I think everybody thinks the same,” Fittipaldi said, working as a F1 pundit for bettingexpert.com.

Which driver will win the 2021 British Grand Prix? Let us know your predictions in the comments section below.

“I was with [McLaren CEO] Zac Brown at Goodwood on Saturday talking about Lando and he’s doing a really incredible job. McLaren have improved since he has been there and George impressed when he drove the Mercedes last year.

“Both are world champion material, I think. It’s a question of opportunity of whether they are able to race for a good team, especially Russell.

“But potentially yes, [both can be] world champions.”

Unlike Norris, Russell has been forced to watch his close friend and former Formula 2 rival compete for points in a far more competitive car while his Williams has been consigned to the back of the grid for the majority of his F1 career.

Still, the 23-year-old holds a remarkable record of never being outqualified by a team-mate with the team, earning him the nickname ‘Mr Saturday’ for his qualifying performances.

He also qualified eighth on the grid for the Austrian Grand Prix — his best starting position — only to be plagued by mechanical issues throughout the race, denying him the chance to win his first point for the race.

Russell did pick up three world championship points when he stepped in for Hamilton at the Sakhir Grand Prix in 2020 after the world champion tested positive for coronavirus and was forced to miss the race.

He qualified second for Mercedes, only a fraction of a second behind Valtteri Bottas, and led the race before a calamitous series of pit stops from Mercedes cost him the race win. That performance, coupled with his overall performance in F1, has made him the favourite to replace Bottas for 2022.

And Fittipaldi believes that while it is difficult to compare the two drivers due to the different levels of pace in their respective cars, Russell’s display in Sakhir proves he can compete — and the 74-year-old has backed them to compete for years to come.

“It’s always difficult to analyse the talents on merit when they are in different cars but when he drove the Mercedes last year, he was outstanding.

“It’s important for England that when Lewis stops, they can carry on this history of having strong English drivers in Formula 1.”

Hamilton goes into this weekend’s race some 32 points behind Max Verstappen in their thrilling battle for the title as Red Bull target their first drivers and constructors trophies since 2013.

The Austrian manufacturer have won each of the last five races to leave Mercedes in their rearview mirror, but Fittipaldi has suggested that Hamilton will be itching to get back to winning ways when he returns to his home track this weekend.

“There are a lot of Formula 1 teams around Silverstone so for them it’s their home track,” he added.

“For Lewis to race the Mercedes there will be very special because it’s his home grand prix and when you do, you give 110 per cent. Lewis has always done well there and the new challenge with Verstappen, it will be a very good race to follow.

“But when they are at home, they have more motivation, they are more focused, more concerned on how to perform on every detail. And not just for Lewis, but for the team too.

"Mercedes will be motivated to give him the best strategy for the race.”