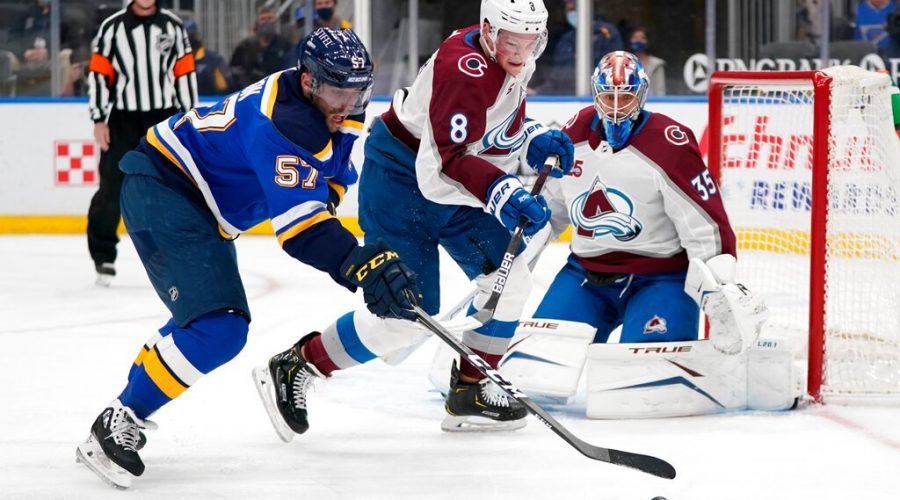 Avalanche captain Gabe Landeskog quickly apologized for the word he used to describe Monday’s first period at St. Louis, but the word wasn’t nearly as bad as the Avs’ uncharacteristic play.

St. Louis’ best players outplayed those from the Avalanche as the Blues defeated Colorado 4-1 at Enterprise Center to climb back in the West Divison playoff picture.

“Our first period was dog (poo). We were so bad,” Landeskog said. “Pardon my language but I don’t know how else to explain it. We were bad in every single area in the first period.”

The Avs’ top line of Nathan MacKinnon, Landeskog and Andre Burakovsky produced a second-period power-play goal but were minus-9 at even-strength — each minus-3 along with star defenseman Cale Makar. The Blues led 2-0 after the first period and 3-0 before the midway point of the second.

“Frustrating night, no doubt,” Landeskog said. “It was a game where, when your effort isn’t there and your brain isn’t turned on right from the get-go, it’s hard to catch up.”

With the Blues having last change as the home team, the MacKinnon line was typically matched against the Blues’ top line of center Ryan O’Reilly and wingers David Perron and Braydon Schenn. Perron and Schenn scored at even-strength as St. Louis built a 3-0 lead just 7:02 into the second period. O’Reilly had two assists during that stretch and his line finished plus-8.

The Avs are 0-2 since clinching a playoff berth Thursday with a 4-3 win at St. Louis, and 1-2 since returning from an eight-day COVID shutdown. On Monday in its eighth and final regular-season meeting against the Blues, Colorado again played without wingers Mikko Rantanen and Joonas Donskoi and No. 1 goalie Philipp Grubauer because of COVID protocol. It also played without winger Brandon Saad, who is out 2-4 weeks after suffering a lower-body injury Saturday.

“I think that the shutdown is partly (to blame) and we’re missing some guys in our lineup. I hate using that as an excuse because we have a lineup in there that can win hockey games,” Avs coach Jared Bednar said. “But we’re missing some key players that play big roles for us. We’re looking forward to getting some guys back here, and Grubi is a big part of that, too. Get our goalie back in the net and the team plays with a little bit more confidence and more swagger.”

The Avs, who blew a 2-0 lead and fell 5-3 to the Blues on Saturday, lost consecutive games in regulation for just the second time this season, and for the first time in more than two months. On Feb. 22 and Feb. 24, they fell by a combined score of 9-3 against Vegas and Minnesota, respectively.

“It’s natural that you’re going to lose a couple (consecutive) games,” Bednar said. ‘It’s a positive that it hasn’t happened in a couple months, for sure.”

Colorado also failed to collect at least two points over two games March 6 and March 8, when it lost in overtime to Anaheim and in another one-goal game to Arizona, respectively.

The Avs (31-11-4) finished 5-3 against the Blues (21-19-6), who won the first meeting on opening night in Denver and the last two in St. Louis. Colorado, which has 10 remaining games, is still four points behind Vegas for the West Divison lead, with a game in hand over the Golden Knights.