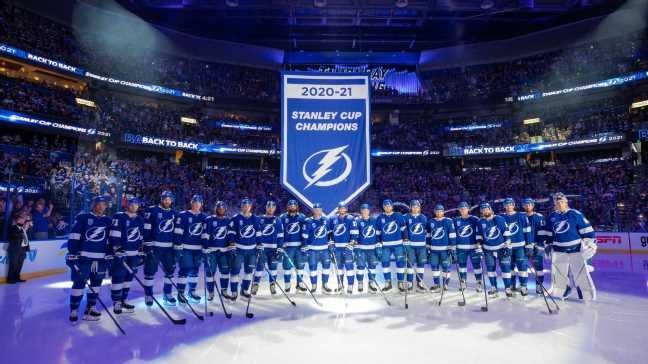 After a long offseason, hockey is back!

The NHL regular season kicks off Tuesday night featuring some exciting games from some of the the league’s best — and newest — franchises. The Tampa Bay Lightning will raise their second banner in as many years while the Pittsburgh Penguins try to spoil their special night. Later on, two of the league’s newest teams — the Vegas Golden Knights and the Seattle Kraken — will take the ice and start their respective seasons.

Both games will be featured on ESPN, bringing hockey back to the network after quite some time — 2003 to be exact. Some NHL teams had some fun with this, remembering where their franchises were the last time hockey was last broadcasted on ESPN.

The return of the puck to the ice is a celebration for many fans and enthusiasts. Social media is also relishing the beginning of the 2021 NHL regular season. Grammy award-winning artist Justin Bieber helps set the stage for a huge night on the ice for the NHL.

The regular season of the NHL kicks off with the Pittsburgh Penguins traveling to Florida to take on the defending champions in the Tampa Bay Lightning. The Penguins will be without star Sidney Crosby who is still rehabbing from wrist surgery. Nevertheless, Pittsburgh sees today as a great day for hockey and hopes to start theor 2021 campaign with a win. Despite them being without their impact player in Crosby, the Penguins received a shout-out from their fellow Pittsburgh team — the Steelers.

The Lightning are coming in looking for a three-peat, which would cement this team’s status as a hockey dynasty. The team knows that their journey starts Tuesday, and this video narrated by Steven Stamkos from the squad’s Twitter account sets the tone for their 2021 campaign — and they also had a little fun courtesy of Pierre-Edouard Bellemare during their morning skate.

Tampa Bay also had the tunes to begin their season, having a music performance by multi-platinum recording band All Time Low. The concert was held in the waters where the Hillsborough River meets the Garrison Channel before Tuesday’s contest. They had the Lightning’s Stanely Cup nearby during their performance, as they got the 2021 NHL season off to a rocking start.

Before the new season of hockey began, the Lightning were able to relive last season’s championship year one more time with their banner raising ceremony. The moment was in front of a packed Amalie Arena — a much different atmosphere compared to last year when the stadium wasn’t as full due to coronavirus protocols. The fans were ready to shower their team with praise for a great 2020 season and root them on for what hopes to be a successful 2021-2022 campaign.

The second game of ESPN’s doubleheader of opening night NHL action features the league’s two newest franchises. The Seattle Kraken will begin its inaugural season against the Vegas Golden Knights — who are in their fifth season of existence. Both teams are expected to make some noise during the 2021 season despite them being two of the NHL’s youngest franchises. Prior to the game, other Seattle professional sports team’s reached out to the Kraken via social media, wishing them luck on their first season on the ice.

The Vegas Golden Knights need to make their mark on this season early, as they have championship or bust aspirations. Maybe they took the term “leave their mark” in a literal sense, as their logo was seen all around Vegas before the game.