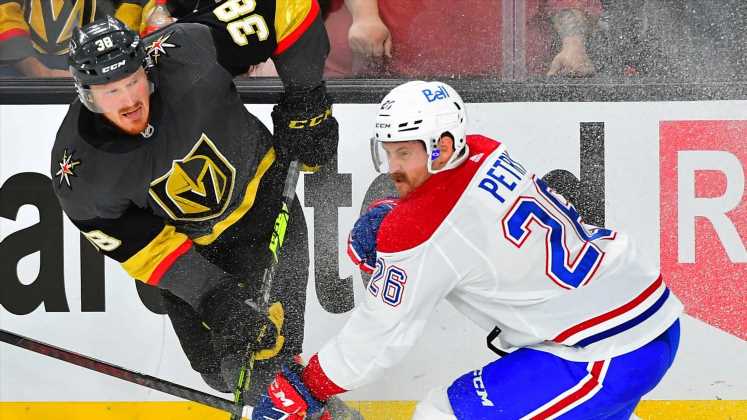 Key Montreal Canadiens defenseman Jeff Petry returned to the lineup Wednesday night for the first time since June 6 and all anyone could talk about was his bloodshot eyes.

But his strong play had the Vegas Golden Knights seeing red as the Canadiens won 3-2 and head to Montreal for the next two games, starting Friday, with the Stanley Cup semifinal series tied 1-1.

Petry missed the past two games after suffering a hand injury in the second round against the Winnipeg Jets. He was a game-time addition to Wednesday's lineup, and when he appeared, attention was drawn to the red in his eyes.

His wife, Julie, joked on Instagram that his condition wasn't related to allergies or a late night in Vegas. She said the eyes didn't bother him and he actually looked better than he did a week ago.

"His eyes have looked like that for a week now," said Petry's defensive partner, Joel Edmundson. "It’s kind of scary, but I don’t think it affected him tonight."

Petry was the team's best defenseman in the regular season with 12 goals and 42 points in one of his strongest seasons. The Canadiens lost 4-1 in Game 1 with him out of the lineup, but he made a difference in Game 2.

He played nearly 21 minutes, with a penalty, a plus-1 rating, two shots, two blocked shots and numerous smart plays. He drew an assist on Tyler Toffoli's first-period goal.

Another one for Tyler Toffoli 🏒

Toffoli has 9 points over the last 7 games, including 2 game-winning goals.

"If he could have, he would have come back earlier (in the playoffs)," Canadiens coach Dominique Ducharme said. "It was good to see him and the way he played. He’s an important player for us."

"Every time you get in a critical moment, big games, you see him at his best," he said.