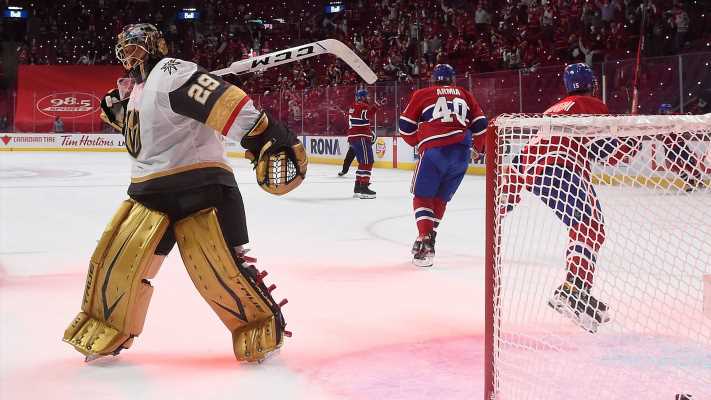 Josh Anderson, who scored on Fleury's misplay behind the net to tie the game with less than two minutes left in the third period, also scored in overtime for a 3-2 victory that gave the Canadiens a 2-1 lead in the best-of-seven Stanley Cup semifinals.

The Canadiens won Game 3 without head coach Dominique Ducharme, who had a positive COVID-19 test confirmed hours before the game. Assistant coach Luke Richardson ran the bench in his absence.

The Golden Knights outshot the Canadiens 47-25, but Price kept Montreal in the game, allowing only goals by Nicolas Roy and by Alex Pietrangelo, his third goal in two games.

Vegas appeared poised for the win, but Fleury misplayed his puck behind the net and it bounced off his skate out front to a wide-open Anderson, who tapped it in.

Fleury, a finalist for the Vezina Trophy and a key reason that the Golden Knights have reached the third round, slammed his stick in frustration.

The goal was Anderson's first since the playoff opener, ending a 12-game drought.

Josh Anderson (@joshanderson_77) with the clutch GWG in OT!

Then he scored in overtime on a skilled play, knocking down the puck to create a 2-on-0 break with Paul Byron for a goal at 12:53.

The Canadiens, the last team to clinch a playoff spot, upset the Toronto Maple Leafs and Winnipeg Jets in the first two rounds and now lead the Golden Knights, who finished 23 points ahead of them in the standings.

Game 4 is Sunday night in Montreal.