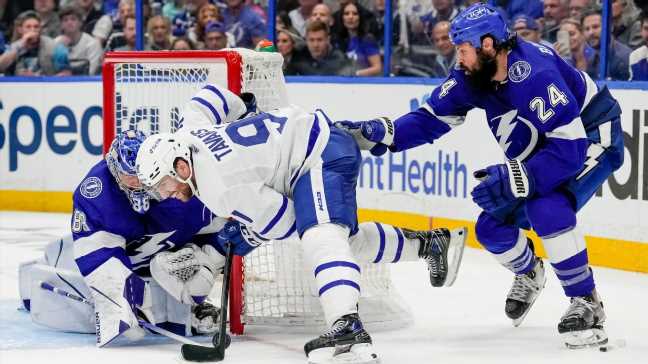 Kristen Shilton is a national NHL reporter for ESPN.

The Toronto Maple Leafs were tight-lipped on the officiating after several plays went against them in a Game 6 overtime loss to the Tampa Bay Lightning in the teams’ first-round Stanley Cup playoff series Thursday night in Tampa, Florida.

Toronto had a chance to send the defending two-time Stanley Cup champions packing with a win and were close to doing so, holding a 3-2 lead midway through the third period. That’s when a controversial high-sticking penalty was called against David Kampf and then another went against Alex Kerfoot just 16 seconds later to give Tampa Bay a 5-on-3 power play.

Nikita Kucherov capitalized with the two extra men to tie the game at 3 and force overtime. Brayden Point came through with the game winner to give Tampa Bay a 4-3 win and force Game 7 in Toronto on Saturday.

What didn’t get called in overtime, though, was Alex Killorn holding Auston Matthews by the jersey for several seconds as the Leafs’ top scorer battled for position in the offensive zone. Matthews was also tripped up at center ice and taken out of the play right before Point scored the winner.

Toronto’s players were clearly upset with the lack of calls and were seen arguing with officials on the ice. But it was what the Leafs didn’t say off the ice that did most of the talking.

“We don’t have any comments about it,” John Tavares said when asked about the officiating in Game 6. “[It was] unfortunate the way it went in the third period, but I thought we regrouped well.”

Matthews was similarly tight-lipped when asked twice about his opinion on the officiating.

“I’m not going to comment on that,” he told reporters after the game.

Toronto and Tampa Bay now have been called for the most penalties this postseason (41 for the Leafs; 36 for the Lightning). Did Matthews think the standard of officiating changed in that decisive matchup?

“I’m not going to comment on that,” he replied again. “What’s in the past is in the past. It’s about the next game.”

Lightning coach Jon Cooper had a different take on the situation, opining that the Leafs “earned” both third-period penalties and “took advantage” of them.

Toronto now will take the series home for a defining Game 7. But closing out a playoff series is hardly the Leafs’ strong suit. They are now 0-8 since 2018 in potentially series-deciding games. They’ve also failed to reach the postseason’s second round since 2004.

The Lightning kept an important streak of their own alive in the Game 6 win. Having lost Game 5 on Tuesday, Tampa Bay moved to 17-0 since 2019 in postseason games that follow a loss.

This entire series has gone back and forth, so to keep their hopes of a three-peat alive, the Lightning will have to break the pattern and take Game 7 on the road.

May 13, 2022 NHL Comments Off on Leafs mum on officiating after Game 6 OT defeat
NFL News