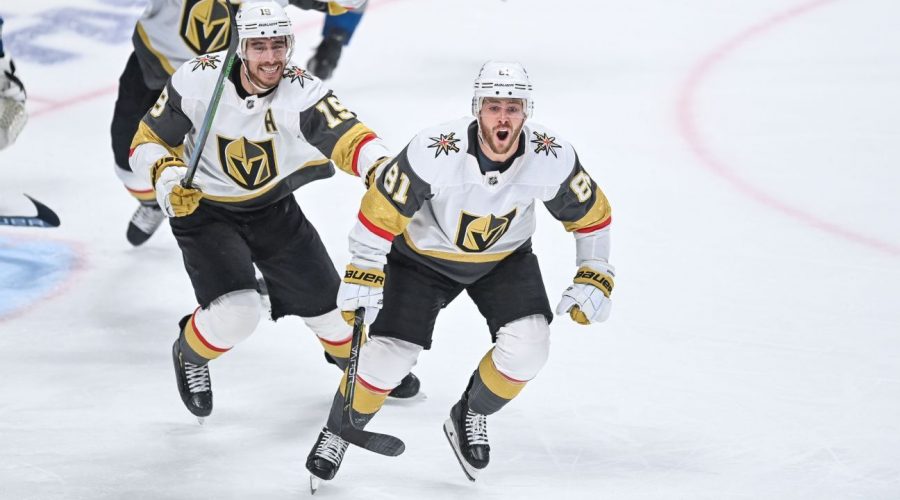 LAS VEGAS — As the Vegas Golden Knights grind away in their thrilling second round series against the Colorado Avalanche, the team’s most productive line has been the second line.

Jonathan Marchessault, William Karlsson and Reilly Smith have scored eight goals in five games against Colorado. Coach Peter DeBoer called the trio “the identity of this franchise.” Fans have started calling them the “Misfit Line,” an ode to Vegas’ inaugural season when the entire team called itself the “Golden Misfits.”

“Obviously Flower [Marc-Andre Fleury] has been the backbone of our team since the beginning of our franchise, and we have a few other players who have been here since the start,” Marchessault said. “But we’re really the only ones, line-wise or pairing-wise, that stuck together. It’s a nice name for us. Because when we started, we were unwanted by our other teams. We all had something in common, and that’s where the magic started for our group.”

Ever since making it to the Stanley Cup Final in 2018, rewriting the expectations for an expansion franchise, it’s been a magical run for the Golden Knights. Since 2017-18, only three teams (Tampa Bay, Boston and Washington) have more wins than Vegas’ 173. It’s also been a wild ride, as the Golden Knights have packed more drama in the last four years than some franchises have experienced in decades: a trademark battle with the U.S. Army, a controversial Game 7 call (on which the NHL later apologized for whiffing) and a photoshopped sword.

On-ice success accelerated the timeline. Marchessault, Karlsson and Smith were originally the team’s first line, but management essentially brought in three new players (Mark Stone, Max Pacioretty and Chandler Stephenson) to play ahead of them. Gerard Gallant, the team’s original coach, was surprisingly fired in 2020 and replaced by Peter DeBoer — who was previously employed by the team’s No. 1 enemy, the San Jose Sharks.

“We have built a winning mentality, we built a winning franchise, but at the point we’re at right now — we’re in year four, and we need to start winning Cups,” Marchessault said. “I mean yeah, it’s fine we made the playoffs four years in a row, but a Cup would be the only thing to bring us satisfaction.”

In a wide-ranging conversation with ESPN on Wednesday, Marchessault reflected on how far the franchise has come by revisiting key moments in the journey. He also talked about the current series against Colorado, in which the Golden Knights, once down 0-2, have climbed back for a 3-2 series lead and a chance to clinch a Stanley Cup semifinals berth at home tonight. To eliminate the best team in the league (and get over its playoff hump), Vegas is re-embracing the misfit mentality.

Here are Marchessault’s thoughts, in his own words:

The fan base in Las Vegas

I was talking to some of my friends playing in Canadian cities, and when they’re not doing well, they get approached and people say to them: “You guys suck right now, wake up,” and stuff like that. Vegas would never do that to us. They’re so good to us. It makes it such an environment to play and live our lives with our families here. It’s been just a life treat, honestly, to be able to play here.

The fans helped us, but we also helped them become a hockey town. Now Vegas is a hockey town. Vegas is probably a top-two, top-three destination to play in the NHL now. We did that in four years.

On how people tried to justify Vegas’ early success

Yeah, people said “the Vegas Flu.” That wasn’t it. I mean, when you go to New York City there’s also cool things to do. And guys in the NHL, they don’t go out anymore the day before the game really.

The truth was: It was just the vibe in the rink and the city. We were the new thing in the city, and it was an exciting environment, and we got a lot of motivation from that.

The expansion draft being rigged? Anyone who knew hockey could have said that the team on paper sucked. I don’t know what they’re trying to do there. I feel bad for Seattle, because people are going to expect a successful Seattle right away, but what we have done is hard to repeat. I think they’ll have a good team, but what we’ve done isn’t easy to do.

Honestly, I remember starting the [inaugural] regular season and we just didn’t want to get pumped like 6-0 every game. So we just took it one game at a time — kind of like a playoff mentality — and gave it our best effort every night. And we were just able to keep it going.

It didn’t just shock us, it shocked the hockey world. It really was an unfortunate situation, honestly. Turk [Gerard Gallant] was such an amazing coach. He brought a misfit team to the Stanley Cup playoffs and to the Stanley Cup Final. He was an All-Star that year, and the year after that he was going to be an All-Star again. It just caught everyone by surprise. But it just shows how unstable the hockey world can be. Like, we can be traded any day. You can lose your job any day.

But at the same time, it wasn’t Pete [DeBoer’s] fault. Pete came here, he brought in another culture, another different style of coaching, and he’s been doing great. He’s a great coach, has been successful for many years. So as a guy, you have to see that I’m just fortunate to have such good coaches in my career.

Honestly it was great, because we needed depth at that time. I don’t think those players are necessarily depth players — they wanted to get another first line here. Management did a great job getting guys that fit well with our team structure, and the team chemistry that we had. We knew as soon as we got those players, we’d be a winning franchise.

It was disappointing. But everyone is human. Everyone makes mistakes. Whatever organization or person you are, if you apologize for it, that’s how you become better and stronger.

We were able to tie that game up, 4-4, and we lost in overtime. You have to give credit to San Jose, they took advantage of the situation and were able to cash in. We were up 3-1 in the series, and they were able to steal one at home, a Game 6 win in our building. They had a good team, and they found a way to win. In Game 7, we played a perfect road game, then 10 minutes left in the third period and everything changes.

It was just unfortunate it was in a Game 7. The same thing happened the next round, St. Louis and San Jose. [Timo] Meier did a hand pass, a clear hand pass, and they scored in overtime and won. They went up 2-1 in the series. But then St. Louis used that as motivation, used that adversity, and then came back and won the Cup that year.

It just goes back to it: everyone faces adversity. Everyone makes mistakes, and everyone is human. But the NHL did make adjustments after that year, which is good.

The 2020 postseason in the bubble

Just a s— situation. But that was a situation everyone was in.

The current series against Colorado

Right now, we’re playing the best team in the league. Honestly, I think that the first game, they just caught us — them being super rested, and us being exhausted from a long series. We went to Game 7 [against the Wild in the prior round], and it wasn’t an easy battle. It was low-scoring games, a lot of physicality. We were just a little tired from that. After that, we had a two-day rest, and we caught our legs a little bit.

Game 2, I thought we dominated that game. We lost in overtime, but we should have had a better outcome. We found our strength there and showed that we can play with them in Game 2.

In Game 3 and Game 4, they were perfect home games. We took advantage of the situation, the crowd, and played great. Last game, I thought they had a really, really good second period. But we showed up in the third period and made it a game.

We know if we play the right way as a team, structurally, we can have a lot of success. We’ve showed that during the season. We had, what, 14 losses this year? That’s not a lot. 40 wins. We know how to win hockey games, we just have to put in the work, put in the proper structure that we know we can put in. When we do that, we’re successful.

On the team’s mentality right now

It’s been a while since we were the underdog, but we’re back at it in this series. We’re playing the best line in the NHL, the best team in the NHL, and we’re playing like there’s no tomorrow. We’re surprising the world of hockey right now by being up 3-2. But we’re doing a good job.

Closing a series is probably one of the toughest things to do, and that was something we couldn’t do last round. We were up 3-1, and let them come back to a Game 7. So when we have the chance to close out a round, we’ve got to do that. It’s the only way we’ll continue on to our goal.

June 10, 2021 NHL Comments Off on Jonathan Marchessault and the ‘Misfits Line’ are driving the Golden Knights once again
NFL News