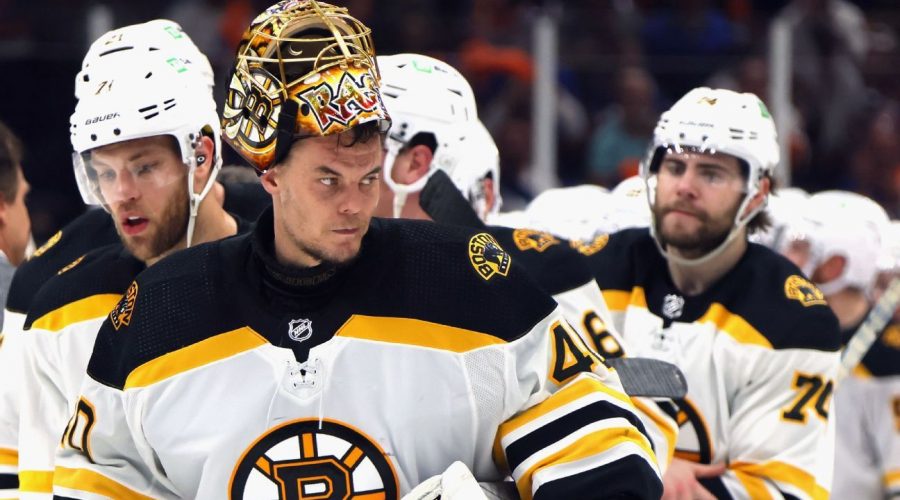 You’re at your job, toiling away for the bosses, trying to do your best work. Over in the corner is the person who previously held your job for 12 years. Someone who, based on the statistics, performed your job more successfully than anyone in your company’s history.

He doesn’t have a contract; heck, he might not even be healthy enough to work again. But he’s sitting there, doing the same tasks you’re doing. Your bosses are openly discussing plans to bring him back. You nod at the guy, and he nods back, both of you implicitly understanding that the seat underneath you is merely being kept warm for him.

This has been the scenario for Boston Bruins goalies Linus Ullmark and Jeremy Swayman for over a month. Tuukka Rask, the 34-year-old franchise leader in wins — and current unrestricted free agent — has been practicing with the Bruins in recent weeks, building back from surgery to repair a torn labrum in his right hip in late July.

This included a stint as the Bruins’ emergency backup goaltender on Dec. 6, when Ullmark was in the NHL COVID-19 protocols. It was a bit like the current leads from Broadway’s “Wicked” finding out that Kristin Chenoweth and Idina Menzel are hanging out backstage, just in case they twist an ankle.

Boston is 17-10-2 (36 points), hanging on to the final wild-card playoff spot in the Eastern Conference. Can the return of Rask not only ensure the Bruins are a playoff team, but make them a Stanley Cup contender?

January 6, 2022 NHL Comments Off on Is Tuukka Rask the Bruins savior?
NFL News