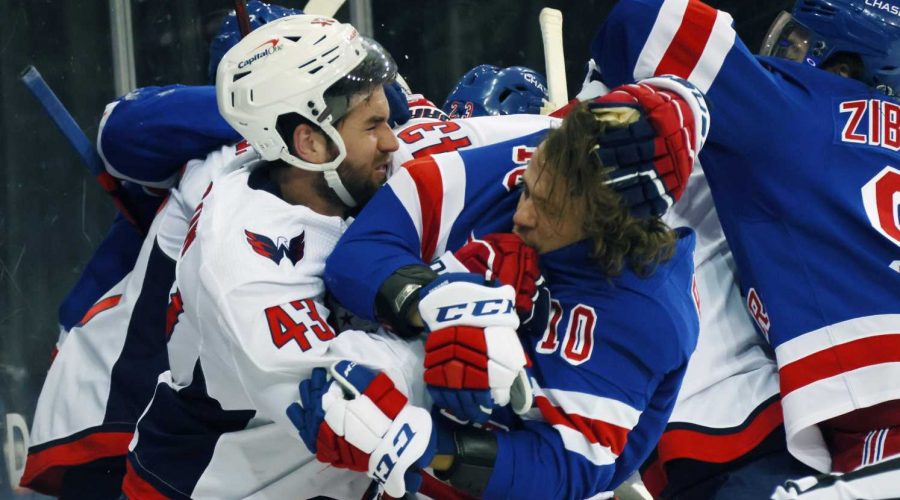 The New York Rangers aren't holding back their feelings about the NHL's decision not to suspend Washington Capitals forward Tom Wilson.

After punching a defenseless Pavel Buchnevich in the back of the head and then attacking Artemi Panarin — ripping his hair and slamming him to the ice, resulting in an injury that will cost the Rangers' leading scorer the final three games of the season — in the Capitals' 6-3 win Monday at Madison Square Garden, Wilson walked away with a measly $5,000 fine.

The Rangers issued a scathing statement Tuesday night in response to the league's lack of discipline, even calling for the NHL's head of player safety, George Parros, to lose his job.

"The New York Rangers are extremely disappointed that Capitals forward Tom Wilson was not suspended for his horrifying act of violence last night at Madison Square Garden," the statement read. "Wilson is a repeat offender with a long history of these type of acts and we find it shocking that the NHL and their Department of Player Safety failed to take the appropriate action and suspend him indefinitely.

"Wilson’s dangerous and reckless actions caused an injury to Artemi Panarin that will prevent him from playing again this season. We view this as a dereliction of duty by NHL head of player safety, George Parros, and believe he is unfit to continue in his current role."

"It’s a joke, to be honest with you," Rangers forward Ryan Strome said of Wilson's $5,000 punishment following Tuesday's practice the MSG Training Center in Tarrytown. "I think Tom Wilson is an effective hockey player. He’s proven he can score goals, he can play with good players. He plays the game on the edge, which it is what it is. But he’s got good skill and he’s produced in this league. I just think that crossed the line."

"I know it’s not my responsibility to make decisions, but I just can’t believe that," he added. "It sends a bad message, in my opinion. I think everyone pretty much agrees with that, and I just think the league missed one big time. It’s unfortunate our best player is out for the rest of the year, and it’s an unfortunate incident that has nothing to do with the play or the game of hockey. That’s where the big issue is."