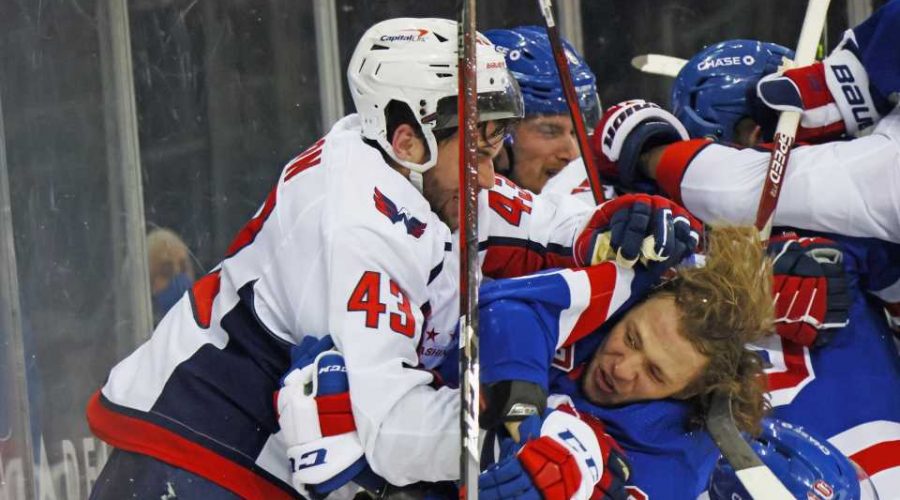 Tom Wilson is at it again.

The Capitals right winger once again blurred the lines of what’s acceptable in Monday’s 6-3 win over the Rangers, not only punching New York forward Pavel Buchnevich’s head in the crease after play was stopped, but also slamming left winger Artemi Panarin to the ice after he came to Buchnevich and Ryan Strome’s defense.

Strome went after Wilson after he punched Buchnevich in the middle period while the Rangers were on the power play. The incident took place at the 12:20 mark in the second period:

This wasn’t a case of Wilson retaliating against Buchnevich for running the goalie, either; the latter was brought down to the ice from behind, by his head, before Wilson decided to add on after the whistle. Wilson was assessed a double-minor for roughing and a 10-minute misconduct, while Buchnevich and Panarin were both penalized with roughing. Brendan Dillon also got a roughing minor to give the Rangers a two-man advantage for 27 seconds.

Wilson’s career is a patchwork of suspensions, fines, questionable behavior and outright dangerous play. The most recent egregious example came on March 5, when he boarded Boston’s Brandon Carlo, hitting him and causing his head to slam into the glass. The move wasn’t penalized in the game, though the NHL did suspend him seven games for the infraction.

It’s uncertain what suspension or fine the NHL will levy against Wilson, a repeat offender. But observers both within and outside the league have called for it to levy harsher penalties against him in an effort to keep its players safe. The Capitals, for their part, seemed not to mind:

“I figured, you should have some more respect for the game and for the players,” Rangers center Mika Zibanejad said after the match. “Yeah, I don’t even know, I don’t honestly know where to start. It’s just horrible. There’s zero respect and I don’t know why I’m surprised. But, yeah, it’s just horrible.”

“We all saw it. There are lines that can’t be crossed in this game and it’s just zero respect to the game in general. You have one of the star players in this league now, who could have got seriously, seriously hurt in that incident.”