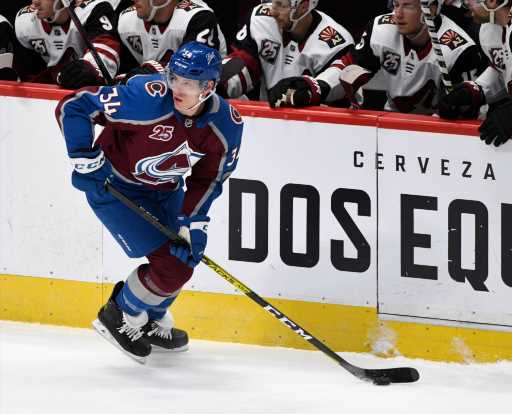 Jacob MacDonald took the long, patient route to the NHL.

With an Ivy League degree from Cornell in his back pocket, the 28-year-old Avalanche defenseman persevered through seven minor-league teams before reaching hockey’s highest level.

Over six years, he hopped all over the hockey map, making stops at the ECHL’s Elmira Jackals and Toledo Walleye, and the AHL’s Springfield Falcons, Albany Devils, Binghamton Devils, Springfield Thunderbirds and Colorado Eagles.

Yet through all that grind, MacDonald says he never thought about finding a real job.

“Not even a little bit,” he said

He was too busy chasing his dreams.

“I thought I’d play a couple years in the Coast (ECHL) and see how it goes,” said MacDonald, who was an undrafted free agent upon graduating with a business degree from Cornell in 2015. “Halfway through my second year I get called up to the American League, and that was an improvement, obviously. And after a couple months there I signed an American League contract for my third year, so I’m moving up, right?

“Those years, I just wanted to play, have fun and see where it takes me. And you never know where it’s going to lead.”

Where it led MacDonald was on the roster of the franchise he grew up rooting for as a youngster in Portland, Ore.

He was acquired by the Avs in a trade with the Florida Panthers on June 19, 2019. Colorado sent forward Dominic Toninato to Florida for MacDonald, who got his big break a year earlier by signing a two-year deal worth a guaranteed $450,000 with the Panthers.

Avalanche coach Jared Bednar called on MacDonald to step into the lineup Jan. 31 at Minnesota — the game after defenseman Erik Johnson went down with a head injury against the Wild. Defenseman Devon Toews was also on the injured list at the time and the Avs previously traded defenseman Ian Cole to Minnesota.

One of the keys to finding a role on a super-deep team like Colorado? Of course, it was MacDonald’s smarts.

Bednar likes how the Oregonian thinks the game.

Nobody in MacDonald’s family had previously played hockey, but it only took one trip to a local junior game to give him the bug.

“When I was 5, I went to a Portland Winterhawks game and I was hooked from the start,” he said. “I watched the game and on the way home I told my dad I wanted to try it. That was that. I never played any other organized sports. All I ever wanted to do was play hockey.”

At age 12, MacDonald and his family moved to Brighton, Mich. It was a hockey hotbed and MacDonald was where he needed to be.

“That was super helpful. There’s no triple-A in the Pacific Northwest — or at least when I was there,” he said. “Moving to Michigan was big. I played in the Compuware organization and they’re still there, always one of the top programs in youth hockey in Michigan.”

MacDonald played on Compuware’s triple-A teams at 13-under, 14U, 16U and 18U before joining the Waterloo Blackhawks of the U.S. (junior-A) Hockey League. After two seasons with the Blackhawks, he had NCAA offers from Cornell, Yale and Ferris State.

“Cornell was the best mix of hockey and academics and they have a longer history than Yale with putting out professional players,” MacDonald said.

For Bednar, MacDonald is that player who never quits, and will never quit on his team.

“I love his story, the fact that he was an Avs fan growing up and he put in a lot of time in another organization (Panthers) and our pro scouts did a nice job of identifying him, among other players like (Ryan) Graves, (Dan) Renouf — guys that have come in and played real well for us that maybe didn’t get a great opportunity someplace else,” Bednar said. “Those guys have put in their time, improving their game, honing their craft so they are in the spot where if they get an opportunity they can make the most of that.

“That’s what Jacob has done.”

MacDonald has played in 26 career NHL games — 24 with the Avs this season, including the last 20 through Friday. If all goes according to plan, there will be many more to come.

“I’ve worked my whole life for this and it’s something I’m not going to take lightly,” MacDonald said. “That degree obviously means a lot to me, and that’s why I went to school. I could have gone to the OHL and try to make it earlier, but college was always one of those things my parents wanted for me, and I did, too. I’m thankful for that degree and maybe I’ll use it when I’m done playing hockey, but hopefully, that’s a ways away.”