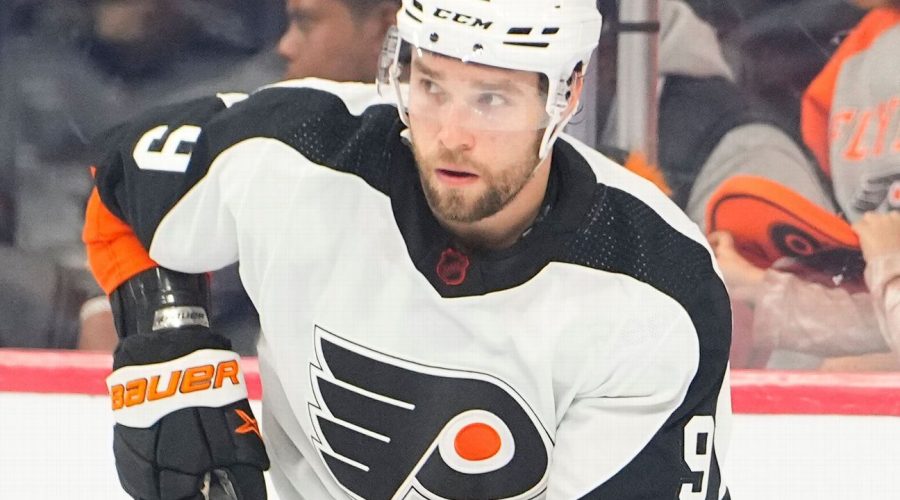 Provorov did not take the pregame skate Tuesday night because he refused to wear the team’s LGBTQ+ Pride Night warmup jersey or use a stick with rainbow tape, citing his religious beliefs. He told reporters after the Flyers’ 5-2 home win over the Anaheim Ducks that it was his choice “to stay true to myself and my religion,” which he identified as Russian Orthodox.

“You Can Play” COO Kurt Weaver said his organization has reached out to the Flyers and Provorov to provide “additional information and a better understanding of the situation” in the aftermath.

“We do this with a lot of our partners where after an incident like this. We’ll come in and run education sessions for the whole team, for the coaches, for the individual players on one-on-one basis,” said Weaver, adding that the Flyers have used their education programs in the past. “A lot of times it’s just that they’ve never had proximity to someone in their life who’s been out. Just to meet somebody who’s another human being goes a long way.”

“You Can Play” has partnered with the NHL since 2013 and has been a driving force behind the league’s “Hockey Is For Everyone” campaign. Weaver said his team reached out to the NHL ahead of the League’s statement on the Provorov situation but did not have a hand in crafting that message.

The NHL, in response to ESPN’s request for comment, said Wednesday in a statement that players are “free to decide which initiatives to support.”

“Hockey is for Everyone is the umbrella initiative under which the league encourages Clubs to celebrate the diversity that exists in their respective markets, and to work to achieve more welcoming and inclusive environments for all fans,” the league said in its statement to ESPN. “Clubs decide whom to celebrate, when and how — with league counsel and support. Players are free to decide which initiatives to support, and we continue to encourage their voices and perspectives on social and cultural issues.”

Weaver expressed disappointment with the way the Flyers and coach John Tortorella handled the situation on Tuesday night. The coach said he never considered scratching Provorov for missing warmups, and said he respected the defenseman for “being true to himself and to his religion” in not participating.

“The concept of ‘team’ can mean a lot of things. I think more coaches have to ask what that cohesion of a team means to them. At what point does a decision like this that a player wants to make cross over into basically not showing up for your job?” Weaver said. “I think (Tortorella) did what a coach needs to do, which is support his player’s decision. But I would hope that, behind the scenes, there’s some more direct conversations around what it means to be a teammate.”

In particular, “You Can Play” was disappointed that Provorov chose not to take part in what was essentially a charity fundraiser. The Pride Night jerseys and sticks were auctioned off to support Flyers Charities, with proceeds going toward their efforts to grow the game in diverse communities. Several of the jerseys have already been bid over $500, with one cresting over $1,200.

“Players who do this sort of thing have a very short perspective on what it means. For me, religion is about charity and inclusion,” Weaver said. “This wasn’t just about a player and a jersey on a patch of ice. What else was affected by this? Visibility and proximity is what breeds understanding and inclusion, and those things were negatively impacted by this. It’s disappointing to see that’s the outcome from this.”

The Flyers have been one of the most ardent supporters of the LGBTQ+ community. They’ve held annual Pride nights. Players like James van Riemsdyk and Scott Laughton have donated tickets to that community every home game. Their mascot, Gritty, also participated in the Philadelphia Pride parade.

“If you embrace the LGBTQ+ community, it will embrace you back. A whole new set of fans came aboard that day,” Weaver said. “Now, when you see an incident like this, how many fans were lost last night, despite all the good work the Flyers have done.”

That said, Weaver and “You Can Play” believe it’s important to focus on the strides the NHL and hockey have made in diversity and inclusion.

“We’re going to have individuals that don’t want to hop onboard the team. That’s unfortunate. But I’d say 13 years ago, we might have had three people wearing Pride jerseys. Now we have one not wearing them. We have to acknowledge the progress,” he said.