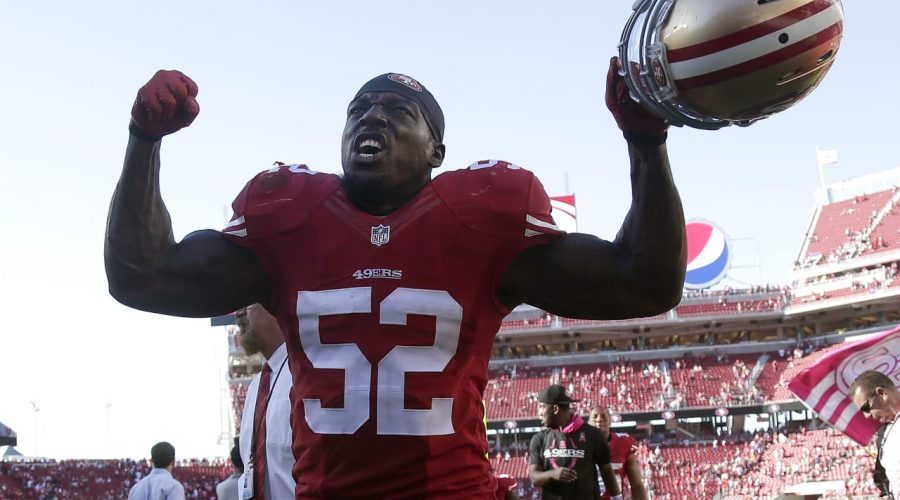 Two all-time greats within the San Francisco 49ers organization from different eras will be celebrated as the newest inductees into the team’s Hall of Fame.

The 49ers, along with the York family, announced Wednesday that wide receiver John Taylor and linebacker Patrick Willis would be the newest inductees into the Edward J. DeBartolo Sr. San Francisco 49ers Hall of Fame.

“John and Patrick represent two generations of 49ers excellence,” 49ers CEO Jed York said in a statement. “They are both members of the Pro Football Hall of Fame’s All-Decade teams, which speaks to how impactful they were on the field. Off the field, they were exemplary and set the standard for what it means to be a 49er. John was an electric wide receiver with some of the most memorable plays in franchise history, including the game-winning 10-yard touchdown reception in Super Bowl XXIII. Patrick was one of the most dominant linebackers we’ve ever seen. His leadership and passion for the game helped make everyone around him better. We are honored to induct John and Patrick into the Edward J. DeBartolo Sr. San Francisco 49ers Hall of Fame, where they will be forever recognized among our all-time greats.”

Having played much of his career alongside the greatest wide receiver of them all, Jerry Rice, Taylor captured the spotlight with one of the biggest catches in Super Bowl history, as he hauled in a 10-yard, game-winning score from Joe Montana with 34 seconds left in Super Bowl XXIII, which was won by the 49ers, 20-16.

Taylor played all of his 10 NFL seasons with the Niners, receiving two Pro Bowl selections and playing on three Super Bowl champions. On one of the NFL’s greatest dynasties, Taylor was often unsung but was nonetheless a crucial contributor in the 1980s 49ers’ success.

Across all those autumns in the Bay Area, Taylor hauled in 347 receptions (ninth in franchise history) for 5,598 yards (seventh) and 43 touchdowns (eighth). Selected out of Delaware State in the third round of the 1986 NFL Draft, Taylor played in 17 postseason games with Super Bowl XXIII, XXIV and XXIX wins and was also a stellar punt returner. He was previously named a member of the Pro Football Hall of Fame’s 1980s All-Decade Team as a punt returner and enshrined in the Black College Football Hall of Fame and the Delaware Sports Hall of Fame.

“From my heart, I would like to thank Eddie DeBartolo and his family for giving this guy from Delaware State a chance,” Taylor said in the team statement. “I am also appreciative of Denise DeBartolo York and Dr. John York and feel extremely indebted to Jed York for his thoughtfulness over the years and throughout this process. I must also mention my gratefulness to the late Neil Smith who recruited me, for without his nod, none of this would be happening.

“I would feel remiss if I didn’t mention the front office staff, with an extra special dose of gratitude to Carri Kimball and Darla Maeda. I want to thank them for their benevolence while I was playing and their continued support throughout my retirement.

“I always played the game not looking for awards but rewards of the soul, like even being mentioned with such great players as Joe Montana, Roger Craig and Ronnie Lott, who are already enshrined in the 49ers Hall of Fame. This is truly awesome.

“To my college teammates and any other athlete attending a small HBCU — guess what? We did it! We are forever hallowed in the 49ers Hall of Fame.”

While Taylor is a member of the HOF’s 1980s All-Decade Team, Willis holds down a spot in the Pro Football Hall of Fame 2010s All-Decade Team. Though Taylor was a part of a decade’s worth of unprecedented 49ers team success, Willis was an individual standout from the time he was taken in the first round in 2007 by San Francisco.

Willis became the 2007 AP NFL Defensive Rookie of the Year and in eight seasons established himself as one of the best linebackers in the game, earning seven Pro Bowl trips and five All-Pro nods. Willis was every bit a tackling machine, topping 100 tackles in six seasons, including a career-high and league-best 174 in his debut campaign. An all-around playmaker, Willis also had 20.5 career sacks and eight interceptions.

“Being selected by the 49ers in the first round of the 2007 NFL Draft was amazing,” Willis said in a statement. “It was a realization of a dream and vision! As it turned out, it was just the beginning of an incredible journey with the greatest franchise in the NFL. With teammates who became like family, coaches who supported my growth, an organization that provided the best throughout my career and fans who are forever faithful, I couldn’t ask for anything more. I am proud to have spent my entire career with the 49ers and I am grateful to the organization for taking a chance on a kid from Bruceton, TN, that had a lot to learn but was hungry for greatness.

“It is an honor to be enshrined in the 49ers Hall of Fame and humbling to stand among some of the legends who have preceded me, players who set new standards in football, sportsmanship, community impact and more. To the 49ers Faithful – thank you for always staying true to the red and gold! I am forever a 49er and forever grateful for the chance to excel at the game I enjoyed in the amazing San Francisco Bay Area.”

Taylor and Willis were drafted by the 49ers, played the entirety of their careers in San Francisco and are now headed to the team’s Hall of Fame. Willis and Taylor will be the 29th and 30th inductees into the team’s hall.