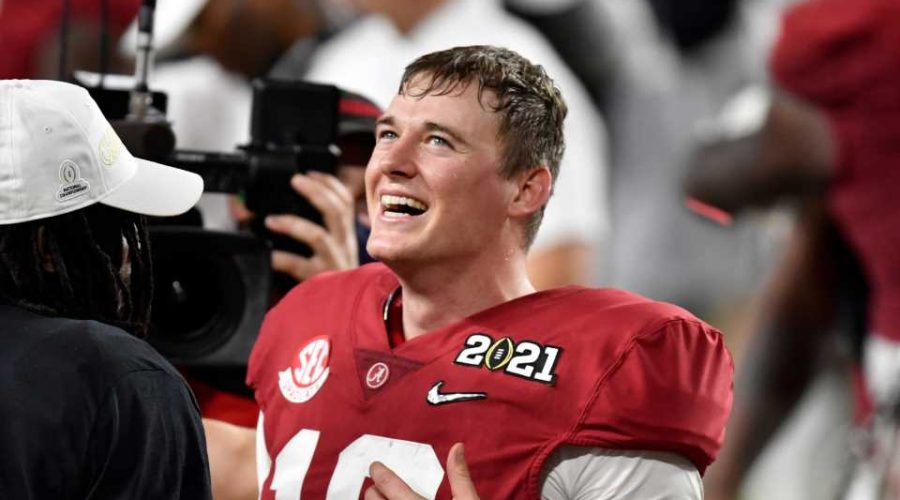 Mac Jones is one of the most intensely discussed prospects of the 2021 NFL Draft, and will continue to be well into his rookie season with whatever team decides to draft him.

The Alabama quarterback has remained a near-constant presence at the top of mock drafts and trending topics alike, not only for the usual NFL Draft fare we see this time every year, but also for his uniqueness off the field. So that’s why you’ve likely heard about his “Joker” nickname, freshman DUI, tennis lessons and his dabbling in Mandarin as much as his athleticism, arm strength, accuracy and game intelligence ahead of the draft.

Among the most asked questions regarding Jones in this draft: Is his middle name really “McCorkle”?

The short answer: Yes. His full, legal name is “Michael McCorkle Jones.” Although his Alabama bio does not list his full name, the biography page of Jones’ personal website confirmed his curious moniker. His full name was also listed in a November 2017 arrest report after he was charged with a DUI as a freshman (per The Tuscaloosa News).

Here’s everything you need to know about Jones’ colorful nickname, and its origin:

According to a December 2020 article by AL.com, Jones’ parents, Holly and Gordon, always intended to name their son “Michael McCorkle Jones” and shorten his middle name to a more conversational “Mac.”

So that explains how you get Mac from Michael. But what about his middle name?

“I always hated that name because it was so long,” Holly Jones told AL.com. “But then we decided, well, my family didn’t have a boy on their side to carry on (the McCorkle name) so that would be the only McCorkle going through.”

Jones in the same article described his freshman arrest in 2019 as a “really rough part of my life,” but necessary for his maturation. Which would explain why he never got into trouble again in the remainder of his time in Tuscaloosa. It wasn’t until he began rocketing up draft boards that his name began resurfacing in college football and NFL circles. And with good reason.

The Jacksonville, Fla., native took over full time as a starter for Alabama in 2020, passing for 4,500 yards and 41 touchdowns to four interceptions while leading the Crimson Tide to an undefeated national championship season. He also set NCAA single-season records in completion percentage (77.4) and quarterback rating (203.1). For his troubles, Jones was a consensus All-America selection, winner of the Davey O’Brien and Johnny Unitas Golden Arm awards and a third-place finisher in the Heisman Trophy race.

Whether Jones can experience a similar level of success in the NFL remains to be seen. But as long as he has his unique name, he will always be a topic of discussion.