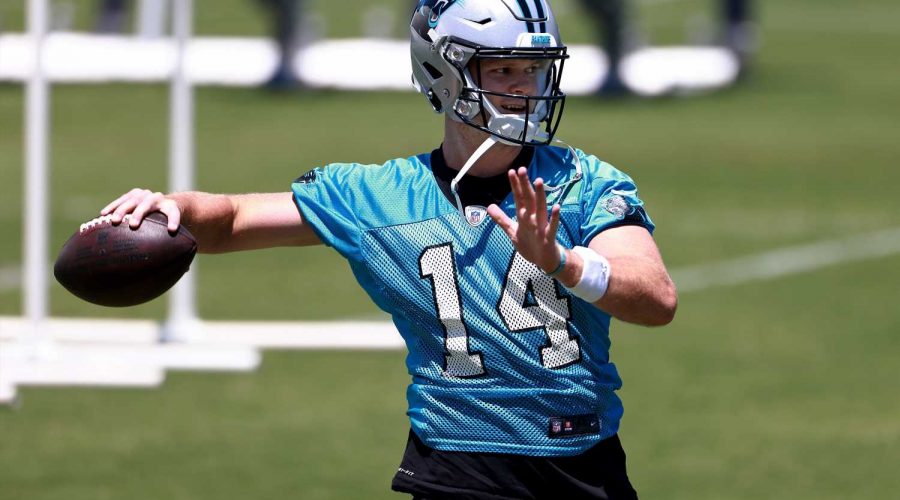 From Big Apple to rotten apple, Sam Darnold’s New York tenure was an … eventful one.

Selected with the No, 3 overall pick in the 2018 NFL Draft, the Jets and their fans hoped that the USC product was the answer to the generations-long question: Who will succeed Joe Namath as Gang Green’s next Super Bowl-winning passer?

After just three seasons, two years with Adam Gase and one bout with mononucleosis (and a hilarious ESPN graphic), Darnold was shipped to the Panthers this offseason, trading his Gotham Green for Carolina blue, as he tries to reignite the smoldering flames of his once-promising NFL career.

In simpler, less dramatic terms: Darnold has been bad, and he’s going to try and get good with a different team.

But the Jets raised some eyebrows this offseason when they traded Darnold to the Panthers. Opting to select QB Zach Wilson with the No. 2 overall pick in the 2021 NFL Draft, a single question remained: Why?

There’s no one answer.

Why did the Jets trade Sam Darnold?

There are three main reasons why the Jets moved on from Sam Darnold after just three years in Florham Park:

Arguably the most important bit of the equation that resulted in Darnold being shipped to the Panthers: He’s not anybody’s guy.

Douglas and Gase worked alongside each other for the 2019 and 2020 seasons, after which Gase was fired and replaced with Douglas’ head coach pick, Robert Saleh. As is the way it goes in the NFL: The GM, head coach and quarterback trio usually come in as a package deal, meaning if one goes, they all go.

The Jets, who hadn’t been aligned on a head-coach-GM-QB triumvirate since the days of Mike Tannenbaum, Rex Ryan and Mark Sanchez, reset all three in (almost) the same breath with Douglas, Saleh and Zach Wilson. Makes for a fresh start for everybody involved: Douglas and Saleh get their guy and got some pretty good draft pick compensation in return for sending off Darnold.

There are two types of teams in the NFL: The teams that have a franchise quarterback and the ones that don’t.

Darnold is entering Year 4 of his rookie deal, and whether you believe the potential is still there or that he’s just no good, it’s a risky spot to be placed in with a new head coach taking over.

With very poor production — more on that later — and Darnold eligible to negotiate a contract extension following his third year in the league, the Jets may have put themselves in a difficult situation: Should Darnold perform well following Year 4, do you consider paying him and giving him an extension off of one year of production? Or is one year of solid-to-good football just not enough of a sample size to pay someone off of?

Rather than try and answer either question themselves, New York kicked the can to Carolina to let them figure it out.

While the Jets could have let Darnold play out his rookie deal and potentially use the franchise tag to eventually leverage and figure out a long-term deal, it’s rare that teams are in the position to draft a franchise quarterback like the Jets had been in 2021.

In turn, the Jets reset the QB position with a rookie deal after drafting Zach Wilson, giving themselves cap flexibility at QB moving forward and resetting the timeline on the window for contention.

Whether you point to Adam Gase, his supporting cast, the bad offensive line or just general organizational dysfunction, the fact remains that Sam Darnold was one of the league’s worst overall passers in terms of pure production in three years in New York.

Everything in context, of course: The Jets had a pretty bad group of skill position players, and with Christian McCaffrey, Robby Anderson and DJ Moore, he may have the best supporting cast (and most stable coaching situation) he’s had since entering the league in 2018.

If Darnold can kick the turnover problems, exorcise the ghosts and turn those “flashes” into sustained success, the Panthers may have found themselves a steal. Don’t bank on kicking three years of average to bad tape, though.