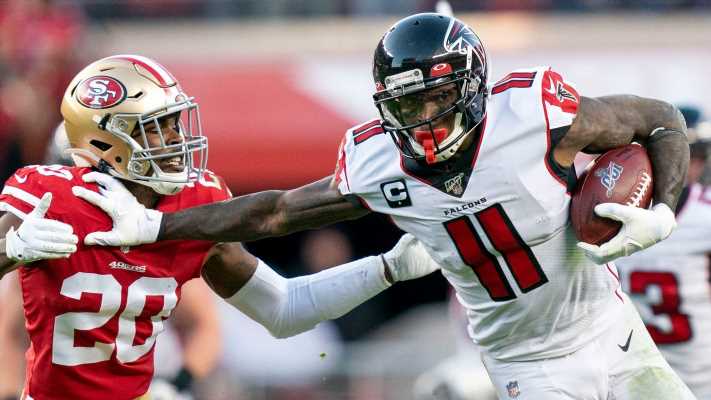 The output of the NFL rumor mill is directly proportional to the proximity of the draft.

This year is no different, reports circulating about whether the Patriots will move up, or which quarterback the 49ers are truly targeting with the No. 3 overall pick.

It's certainly not unusual for all 32 teams to do their due diligence on draft prospects and potentially available veterans throughout the league. But any whispers flitting around Jones could carry significant credence because …

One of Falcons WR Julio Jones' most memorable performances occurred in 2019 on the road against the eventual NFC champion 49ers. (Photo: Kyle Terada, USA TODAY Sports)

► He's already 32 and, as punishing as a mammoth and explosive receiver can be (Jones is 6-3, 220 pounds), those guys are also substantial targets who tend to absorb a lot of wear and tear by definition – Exhibit A being Calvin "Megatron" Johnson, who retired at 30. It seems like Jones is often nursing injuries, and hamstring issues limited him to nine games in 2020.

► With the fourth overall pick, Atlanta is in position to replace Jones in some fashion Thursday night. Florida tight end Kyle Pitts or LSU wideout Ja'Marr Chase seem capable of at least approaching Jones' historically prodigious production in the near future.

► A divorce could be mutually beneficial for Jones and the Falcons. He's not getting younger and is unlikely to win a ring with a franchise at least in some semblance of a rebuild as it retools under new management. And speaking of management, first-year GM Terry Fontenot continues to be handcuffed by the constricting salary cap situation he inherited. Trading Jones – assuming any prospective deal became official after June 1 – would allow Atlanta to recoup his $15.3 million salary in 2021, even if incurring a dead cap charge of $7.75 million (and another $15.5 million in 2022). Still, it's financial flexibility this organization badly needs.

► Despite his advancing age and sometimes nagging injuries, Jones still gets it done on the field and can take a good offense to great and a great offense to unstoppable. His 85.7 receiving yards per game in 2020 ranked seventh league-wide, and his career average of 95.5 yards per game is tops in NFL history – nearly 10 clear of second-place (and newly elected Hall of Famer) Megatron, who checks in at 86.1 ypg.

So given those considerations – not to mention the ability to consume the non-guaranteed remainder of Jones' three-year, $66 million extension (which takes effect this season) – here are six clubs that might be in the market for his services:

Baltimore Ravens: They've been steadily fielding questions about whether they'll pursue a No. 1-caliber receiver for QB Lamar Jackson in the draft. But a big swing for Jones is the kind of move the Ravens occasionally make, and they do have the cap space and a newly acquired first-rounder from the Orlando Brown Jr. trade to facilitate such a transaction. Jones' numbers would inevitably take a sizable hit in a run-heavy offense that's ranked last in passes attempted in both of Jackson's seasons as the primary starter. But Jones could surely have a monstrous impact here and earn a legit chance to add a championship to what's already a Canton-worthy résumé.

Indianapolis Colts: GM Chris Ballard is generally very prudent with his draft and cap resources. But he's also not afraid to pull the trigger when a unique opportunity arises – such as last year's acquisition of All-Pro DT DeForest Buckner. Indy is built to win now but seems to be a weapon away from seriously challenging the Chiefs, Ravens, Bills and Browns for AFC supremacy. Snatching Jones would not only give new QB Carson Wentz a premier pass catcher, it would only make T.Y. Hilton and Michael Pittman Jr. more dangerous in secondary roles. And given how well this team ran the ball down the stretch in 2020 on the way to the postseason, somebody's going to be eating well for this offense.

New England Patriots: They were atypically proactive in free agency, refurbishing last year's underachieving receiving corps with WRs Nelson Agholor and Kendrick Bourne and TEs Hunter Henry and Jonnu Smith. But none of them can hold a candle to Jones, who needed only four catches to hang 87 yards on the Pats in Super Bowl 51 even as they tried to render him a non-factor. Teaming Jones with former NFC South peer Cam Newton, who requires defenders to respect his ability to run, could take a 27th-ranked offense to an entirely new stratum as Bill Belichick and Co. try to reclaim an AFC East crown that seemed like a birthright prior to Tom Brady's departure.

Jacksonville Jaguars: They've got the cap room to accommodate Jones' salary and the draft capital to offer Atlanta a competitive deal. The Jags may not appear like a team ready to contend immediately, but recent history suggests that a reliable Super Bowl formula entails stocking a roster full of established players around a quarterback on a rookie contract – and what a gift Jones would be to presumed No. 1 pick Trevor Lawrence.

New York Jets: They've got the cap room to accommodate Jones' salary and the draft capital to offer Atlanta a competitive deal. The NYJ may not appear like a team ready to contend immediately, but recent history suggests that a reliable Super Bowl formula entails stocking a roster full of established players around a quarterback on a rookie contract – and what a gift Jones would be to presumed No. 2 pick Zach Wilson.

San Francisco 49ers: They'd already signaled themselves in win-now mode, little more than a year after coming up short in Super Bowl 54, after elevating for that third pick of the draft. So why not double down? Neither Deebo Samuel nor Brandon Aiyuk is your classic No. 1 receiver, gifted as both are. But adding Jones to their ranks, in conjunction with TE George Kittle tearing up the seams, would vault the convalescing Niners right back into the NFC's elite tier. Jones totaled 219 catches for 3,280 yards (in just 30 regular-season games) in Kyle Shanahan's two seasons as Atlanta's offensive coordinator in 2015 and '16 – which also represented both of Jones' All-Pro campaigns, and included his best NFL season. (In 2015, he finished with 136 receptions, tied for third most ever, and 1,871 yards – second only to Johnson's 1,964-yard single-season record from 2012.)

The appeal of a Jones-Shanahan reunion is obvious for a team that hasn't had a 1,000-yard wideout since 2014 or a 1,200-yard wide receiver – Jones' seasonal average for his career is 1,290 yards – since Hall of Famer Terrell Owens had 1,300 in 2002. And if none of those arguments resonate, 49ers fans are sure to recall Jones' performance at Levi's Stadium in 2019, when he racked up 13 grabs for 134 yards and two scores – including the game-winner with 2 seconds left. It was one of just three games San Francisco and its top-ranked passing defense lost on the way to the NFC title.

April 26, 2021 NFL Comments Off on Why Atlanta Falcons might trade Julio Jones, and six NFL teams that could target him
NFL News