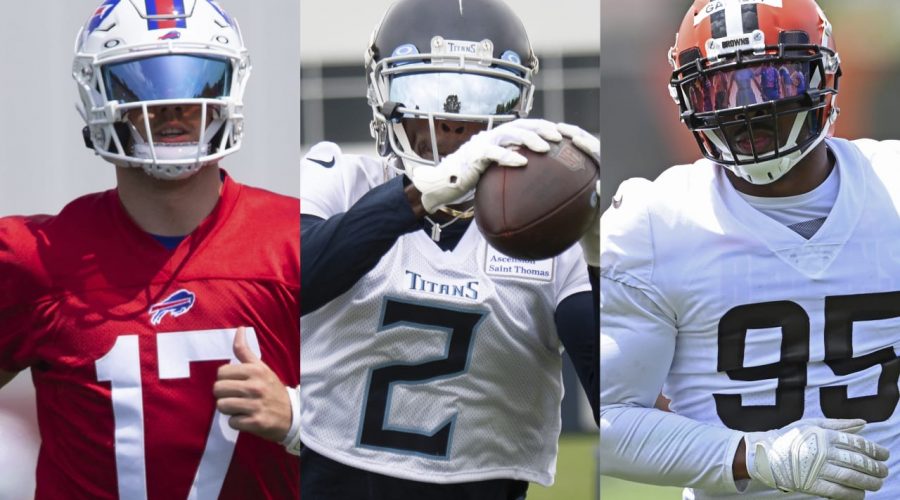 The NBA’s conference finals are chock-full of new blood, with the Hawks and Bucks facing off in the East and the Suns and Clippers doing battle in the West. None of these team have won a championship since the NBA/ABA merger in 1976. While the Hawks (1958) and Bucks (1971) each earned one crown before the merger, the Clippers and Suns have never claimed a title.

Naturally, this got me thinking about the 12 NFL franchises that have yet to win a Super Bowl:

Looking at those organizations, who’s most likely to capture their first Lombardi Trophy in the 2021 NFL season? Good question. Here are my rankings, Schein Nine style. (Apologies to the Lions, Texans and Jaguars, who were left on the cutting room floor. Unfortunately, my name rhymes with nine, not twelve.)

The Bills fell one win short of Super Bowl Sunday last season, and there are legit reasons to believe they’ll be better in the coming campaign.

First of all, it was a major win for Sean McDermott’s team to keep both coordinators, Brian Daboll and Leslie Frazier. These two interviewed for head-coaching jobs earlier this offseason, but they’re back for another year with the Bills. Huge for continuity’s sake. Daboll has a tremendous rapport with Buffalo’s most important player, Josh Allen﻿. The 25-year-old quarterback has improved each year in the NFL, throwing himself squarely into last season’s MVP/Offensive Player of the Year discussions, with a 37:10 touchdown-to-interception ratio and eight more rushing scores. The guy’s become a star, combining a rocket arm with top-tier athleticism. Brandon Beane’s done a spectacular job surrounding him with receiving talent, too. Stefon Diggs﻿, of course, leads the pack, having just led the NFL in catches (127) and receiving yards (1,535) in his first year with the Bills. Wait until the guy gets to feed off Bills Mafia, who are champing at the bit to cheer on their reigning AFC East champions with Highmark Stadium returning to full capacity. Folding tables, beware!

Defensively, Buffalo took a step back in 2020. But the unit’s quite experienced, with a number of established studs in the back seven, including linebackers Matt Milano and Tremaine Edmunds﻿, safeties Jordan Poyer and Micah Hyde﻿, and cornerback Tre’Davious White﻿. Up front, Beane added a pair of intriguing defensive linemen — Miami’s Gregory Rousseau and Wake Forest’s Carlos Basham Jr. — in the first two rounds of the 2021 NFL Draft.

All in all, the Bills have the necessary ingredients — fantastic coaching staff, astute GM, star quarterback, pass-catching weapons, experienced defense — to take the next step and hit the Super Bowl.

I LOVE this roster, starting with the superb 1-2 punch at running back, Nick Chubb and Kareem Hunt﻿. With those two guys by his side, Baker Mayfield really had the light go on down the stretch of his third NFL campaign. Over his final 12 games of last season, including two playoff bouts, Mayfield threw 20 touchdown passes against just three interceptions. His play was inspiring. And he heads into the 2021 season with talent and depth at both wide receiver and tight end.

On defense, it all starts with the 6-foot-4, 272-pound force of nature in the No. 95 jersey. Myles Garrett is a bona fide game wrecker. I won’t be the least bit surprised if he breaks the single-season sack record in 2021. And now Cleveland has another former No. 1 overall pick manning the opposite edge. Jadeveon Clowney said earlier this week that it took him eight years to find a teammate like Garrett. It’s true. These two are nightmare fuel for opposing quarterbacks.

The Browns — yes, the Browns — have one of the most complete rosters in the NFL today. I won’t bat an eye if Cleveland finishes top five in offense and defense. Reigning NFL Coach of the Year Kevin Stefanski has to be thinking Championship Sunday, at least.

Julio Jones changes everything. Jones and A.J. Brown are now the best receiving tandem in the NFL. Ryan Tannehill﻿, who has been an absolute stud since taking the reins in Tennessee, could go up another level. And this will open up boxes for the pulse of this team, running back Derrick Henry﻿. Back-to-back 2,000-yard seasons? It’s more than possible, given how much opponents will have to respect Tennessee’s dynamic duo out wide. The defense added three starters in free agency (DE Denico Autry﻿, LB Bud Dupree and CB Janoris Jenkins﻿) and drafted athletic freak Caleb Farley﻿, a high-upside cornerback who would’ve been long gone by the Titans’ No. 22 pick if not for some injury concerns.

Mike Vrabel is a fantastic head coach who has yet to log a non-winning season. He’ll continue that trend this year. In fact, while I rank Buffalo and Cleveland ahead on this list, there isn’t much separating these three teams. They’re definitely the cream of this crop.

The defense is ready to rock, with J.J. Watt joining a healthy Chandler Jones to rush the passer. (Now the Cardinals just need to get back on the same page with the latter.) And I loved the first-round selection of Zaven Collins﻿, who gives Vance Joseph another versatile disruptor on defense.

But of course, Arizona’s calling card remains the high-flying offense. With Kyler Murray heading into Year 3 in Kliff Kinsgbury’s offense, it’s time to rock and roll. It’s time to enter the MVP discussion. The receiving corps is deep and talented, starting with DeAndre Hopkins﻿. The offseason additions of veteran A.J. Green and rookie Rondale Moore were perfect. This Air Raid is about to explode! And Steve Keim told me on SiriusXM Radio that he is a big believer in Chase Edmonds running the ball. A lot of fantasy types have been begging for Edmonds to get the rock more consistently. While free-agent addition James Conner brings a physical dimension to the backfield, Edmonds is a playmaker who could enjoy a career year.

I expect the Cardinals to make the playoffs — and once there, they have a real chance to make a run.

As I revealed back in March, this is my Cinderella team in 2021. After a pair of losing seasons, the Bolts are about to make some noise.

Of course, not everything was suboptimal in 2020. Justin Herbert arguably had the greatest rookie season ever at quarterback. And now, with a full and normal offseason at Herbert’s disposal, it wouldn’t shock me to see him carry the Chargers to the playoffs and challenge for MVP. He’s that impressive. Not to mention, his offensive line was brilliantly repaired by Tom Telesco in the draft and free agency. Speaking of brilliantly repaired … Derwin James is healthy! He changes everything for L.A.’s defense. I’ve penned many times how much I love the Brandon Staley hire at head coach. I can’t wait to see what he does with James, Joey Bosa and the rest of the Chargers’ D.

Everyone’s talking about the Rams potentially playing this coming season’s Super Bowl at home in SoFi Stadium, but don’t overlook the Herbert-led Bolts. Los Angeles is suddenly an NFL hotbed.

This might be the most fascinating team in the NFL this year. If Aaron Rodgers never plays another snap for the Packers — and I don’t see any sign that he will — Minnesota is my pick to win the North. Danielle Hunter is back on defense, and that puts the Vikings back in the mix. The pass rush was nonexistent without him. I loved the Patrick Peterson signing, a perfect match with defensive guru Mike Zimmer. Justin Jefferson enjoyed a magical rookie season and it was no fluke: The guy is a dominator outside. If Adam Thielen can stay healthy, Minnesota could have the best 1-2 WR punch this side of Julio Jones﻿-A.J. Brown. Of course, Dalvin Cook is a gamebreaking star in the backfield. Which leads us to the lightning rod …

Look, say what you will about Kirk Cousins﻿, but he’s a very good player. Is he elite? No. He ranks somewhere in the 8-16 range of quarterbacks. Is he good enough to win in the playoffs? Yes. Remember when Cousins and Co. shocked the Saints in New Orleans two postseasons ago? Don’t let the haters forget it.

For this subject matter, it’d probably be best if my name actually rhymed with six. Because the final three teams on this list aren’t winning Super Bowl LVI.

Well, OK, strange things happen in this parity-driven league. And hey, I already predicted the Bengals would win more games than the Steelers in 2021. Plus, I’ve got a comfy seat on the Burrow bandwagon. So let’s go!

While the playoffs feel like a stretch, I refuse to rule them out. Joe Burrow won’t accept losing, so neither will I. And look at the weaponry surrounding Cincy’s second-year signal-caller. No. 5 overall pick Ja’Marr Chase reunites with his LSU quarterback, joining a receiving corps that already features Tee Higgins and Tyler Boyd﻿. That’s one hell of a pass-catching trio. And Joe Mixon﻿’s an all-around stud in the backfield, poised for a bounceback season after an injury-riddled 2020. The defense carries a number of questions — a common trait for the remaining teams in this rundown — but Burrow’s in line for the type of breakthrough season that covers up a lot of warts.

In hiring Arthur Smith, the Falcons brought in a new head coach, a new play caller and a much-needed attitude changer. It’s not that hard to imagine Smith turning this thing around in a hurry. Despite last year’s 4-12 record, Atlanta isn’t devoid of talent, especially on the offensive side of the ball. Even without Julio Jones﻿, I see the Falcons scoring a bunch of points in 2021. Matt Ryan is still plenty capable at age 36, and he hasn’t worked with an offensive mind this sharp since Kyle Shanahan back in 2016 — when the quarterback won MVP and nearly a Super Bowl. Calvin Ridley showcased his WR1 ability by excelling during Julio’s injury absence last season. No. 4 overall pick Kyle Pitts is a dynamic threat who’ll stress opposing defenses week in and week out.

Smith and the Falcons lured Dean Pees out of retirement to direct the defense — and the 71-year-old has his work cut out for him. Over the last three seasons, Atlanta has ranked 28th, 20th and 29th in total D. Outside of DT Grady Jarrett﻿, the defense lacks juice up front. Meanwhile, the secondary is young and unproven. Pro Football Focus actually ranks it as the worst defensive backfield in the NFL heading into the 2021 campaign.

Basically, every Falcons game could be a fantasy goldmine, for players on both teams.

Christian McCaffrey is healthy. Sam Darnold is an upgrade. And Terrace Marshall Jr. feels like the kind of Day 2 draft steal who makes an early impact, especially with opposing defenses focused on Carolina’s two 1,000-yard receivers, D.J. Moore and Robby Anderson﻿. Long story short, this offense is going to rock under Joe Brady. I’m less certain about the other side of the ball.

The defense definitely has some intriguing young talent. Jeremy Chinn was a hybrid revelation in Year 1, while fellow rookie Derrick Brown improved significantly over the course of last season. And then there’s 23-year-old edge rusher Brian Burns﻿, who could be on the verge of a breakout Pro Bowl campaign. No. 8 overall pick Jaycee Horn enters the fray with high expectations — and the kind of man-cover chops that could alter Phil Snow’s approach as the Panthers’ defensive coordinator. The unit is full of athletic playmakers; it’s up to Snow and Co. to foster everyone’s growth.