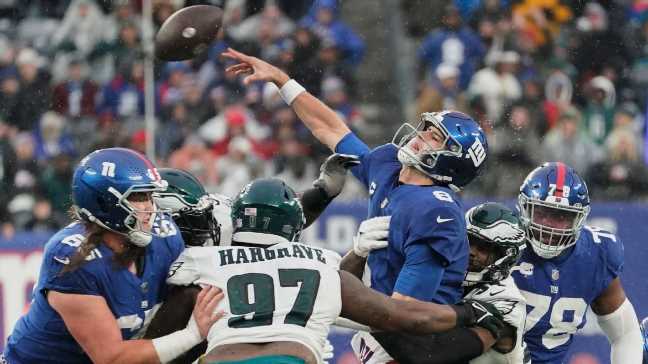 The NFL playoffs’ divisional-round schedule for the 2022 season is stacked with great matchups, and we have you covered with what you need to know heading into the weekend. Our NFL Nation reporters bring us the biggest keys to every game and a bold prediction for each matchup.

Additionally, ESPN Stats & Information provides a big stat to know and a betting nugget for each contest, and our Football Power Index (FPI) goes inside the numbers with a game projection. Matt Bowen picks out a key game-planning matchup to watch in every game, and Kevin Seifert tells us what to know about the officiating. Finally, Seth Walder and Eric Moody give us final score picks for every game. Everything you want to know is here in one spot to help you get ready for a loaded weekend of NFL playoff football.

Let’s get into the full divisional slate, including Trevor Lawrence vs. Patrick Mahomes in Kansas City, an NFC East battle in Philadelphia, two high-octane offenses facing off in Buffalo and a pair of elite pass-rushers getting after the QB in San Francisco.

Note: New for this season’s playoffs, each team will be guaranteed a possession if a game goes to overtime.

What to watch for: The Chiefs had nearly 500 yards against the Jaguars when the teams met in November, and that’s with Kansas City committing three turnovers and losing a possession when the Jaguars recovered an onside kick. Chiefs quarterback Patrick Mahomes said he was anticipating a much different version of the Jaguars this time around, and there’s good reason for that. Jaguars defensive coordinator Mike Caldwell was on the staff of the Bucs in 2020 when Tampa Bay allowed more than 500 yards to the Chiefs during a late-season game and then shut down Kansas City several weeks later in Super Bowl LV with a completely different game plan. — Adam Teicher

Bold prediction: Mahomes and Trevor Lawrence will combine to throw 10 touchdown passes. Mahomes had four in their previous meeting in Week 10 and has thrown 11 TD passes in his past three playoff games. Lawrence is coming off a four-interception, four-TD performance in the wild-card victory over the Chargers. It might take 40 points to win this game. — Mike DiRocco

Stat to know: Generating pressure was one of the keys to Jacksonville’s late-season surge. The Jaguars had a 38.6% pressure rate during their five-game win streak to end the regular season, which was second best in the NFL over that span, and they sacked Justin Herbert three times in the wild-card round. But the Chiefs led the NFL in pass block win rate (74.7%), and Mahomes is No. 1 in the league in QBR (84.7) and completion percentage (77.2%) when he doesn’t face pressure.

Bowen’s game-plan key: The Jaguars need to find a way to isolate receiver Christian Kirk against man coverage, which the Chiefs threw at Lawrence 66.7% of the time in these teams’ regular-season meeting. Kirk has the agility to shake coverage and get open on high-percentage throws. Read more at ESPN+.

What to know for officiating: Referee Shawn Hochuli’s regular-season crew threw the second-most flags in the league (14.6 per game). That included 10 flags for roughing the passer, tied for second most in the NFL. The Chiefs have been especially sensitive about roughing calls since a Week 5 call against defensive tackle Chris Jones overturned a fumble recovery. — Seifert

Matchup must-reads: Why Doug Pederson is the perfect coach for the Jaguars … How Andy Reid saved the Kansas City Chiefs … Pederson unsure Jags are ‘cockroaches,’ but they ‘keep fighting’

What to watch for: The Giants come in riding the momentum of a 31-24 upset win over the Vikings in the wild-card round, while the Eagles are trying to get back to dominant form after going 1-2 to finish the regular season. All eyes are on the right shoulder of Jalen Hurts and how it will respond to contact. He was not listed on the injury report this week but is not believed to be 100% healthy yet. Good friend A.J. Brown said the vibe around Hurts is “he’s ready to go, ready to do whatever it takes to get it done.” With the benefit of a couple weeks’ rest, expect more designed runs for Hurts after the coaches stayed largely away from them in the regular-season finale. — Tim McManus

Bold prediction: The Giants will score a special teams return touchdown. It’s only right in this season of surprises that they get one now. They haven’t had one yet this season — or since 2015 for that matter. Now seems as good a time as any for no reason other than they’re due. — Jordan Raanan

Bowen’s game-plan key: Looking for an X factor who could play a role in the Giants’ upset bid? Receiver Richie James has seen at least six targets in each of his past three games, and New York should try to get him loose off the ball against man coverage and let him use his catch-and-run traits to make plays in big spots. Read more at ESPN+.

What to know for officiating: Referee Clete Blakeman’s regular-season crew tied for the fourth-most flags in the NFL at 14.4 per game. But it threw only 30 flags for offensive holding, tied for the fifth fewest. That could be of note for the Eagles, who committed the NFL’s fourth-most holding fouls (30), as they try to slow down the Giants’ active defensive front. The Giants drew the NFL’s fourth-most offensive holding calls during the regular season (24). — Seifert

Matchup must-reads: Respect for Giants QB Jones is ‘going up’ around the NFL … How GM Howie Roseman built the best roster in the league … ‘We have an elite quarterback’: Giants laud Jones after victory … Sanders is having the breakout year he always knew he could … Hurts: ‘Got a bounty on me every week’

What to watch for: The Bills and Bengals will meet in Orchard Park, New York, after the regular-season meeting between the two teams in Cincinnati was initially postponed and then canceled due to Bills safety Damar Hamlin suffering a cardiac arrest on the field in the first quarter. Both teams come into this game riding long win streaks (nine for the Bengals and eight for the Bills), making this the seventh-ever playoff meeting between teams on winning streaks of at least eight games, and the first before the conference championship round. The Bills are 4-0 in home playoff games under coach Sean McDermott, while the Bengals won their two playoff road games in 2021. — Alaina Getzenberg

Bold prediction: The Bengals will force three turnovers. They have forced 11 turnovers in the postseason in five games dating to last year’s wild-card win over the Raiders. With Buffalo quarterback Josh Allen turning over the ball at a high rate, Cincinnati’s opportunistic defense will be looking to bait Allen into risky plays. Allen turned the ball over three times in the wild-card round after leading the NFL in turnovers during the regular season (19). Per Elias Sports Bureau, only two players have led the league in turnovers and still reached the conference championship round over the past 45 seasons (Eli Manning in 2007, Jim Kelly in 1992). If Cincinnati can successfully create some turnovers, the Bengals will have a good chance of returning to the AFC title game. — Ben Baby

Stat to know: Cincinnati receiver Ja’Marr Chase has nine straight games with at least seven receptions, the fifth-longest streak since the 1970 merger (including playoffs). And Buffalo receiver Stefon Diggs now has three 100-yard receiving games in the playoffs with the Bills — the second most in Buffalo history behind Andre Reed’s five — after going for 114 yards in the team’s wild-card win.

Bowen’s game-plan key: The Bengals should look to blitz slot cornerback Mike Hilton to generate some pressure on Allen. Cincinnati blitzed defensive backs at a rate of 10.7% this season, 10th most in the league, and Hilton can be a disruptor in those spots. Read more at ESPN+.

What to know for officiating: Referee Carl Cheffers’ regular-season crew tied for the fourth-most flags in the NFL at 14.4 per game. The Bengals committed the NFL’s third-fewest penalties during the regular season (95) but were flagged for seven in their win over the Ravens in the wild-card round. The Bills, who ranked No. 19 in the NFL during the regular season with 115 flags, got out of the wild-card round with only three penalties. — Seifert

Betting nugget: Cincinnati is 15-4 against the spread on the road since the start of last season, including 7-2 ATS this season, 7-1 ATS in its past eight games and 4-0 ATS in its past four games on the road. And the Bills are 3-7-1 ATS in their past 11 games. Read more at ESPN+.

What to watch for: Niners quarterback Brock Purdy has passed every test placed before him to this point, but the Cowboys’ defense represents the biggest challenge Purdy and the 49ers’ offense have faced to date. The Cowboys led the NFL in pressure percentage (39%) and finished second in sacks per dropback (8.6%) during the season. Purdy has handled pressure well in a smaller sample, with four touchdown passes and no interceptions when under duress since becoming the starter in Week 14. How he handles what Dallas throws at him will go a long way in determining a winner in this classic playoff rivalry. — Nick Wagoner

Bold prediction: Brett Maher will make a 47-yard field goal to win the game against the 49ers to send the Cowboys to their first NFC Championship Game since the 1995 season. After missing four point-after attempts in the wild-card win against the Buccaneers, all eyes will be on Maher. And he will show the form of the kicker who set the Cowboys’ record for points in a season and missed just three field goal attempts and three PATs during the regular season. Now that is bold. — Todd Archer

Stat to know: Dallas’ Micah Parsons and San Francisco’s Nick Bosa know a thing or two about getting after the quarterback. Parsons led all defenders during the regular season with 74 pressures, while Bosa ranked third with 58. And Parsons led all edge defenders in pass rush win rate this season (30.4%), while Bosa ranked ninth (21.5%). Bosa topped the NFL in sacks with 18.5, while Parsons was seventh (13.5).

Bowen’s game-plan key: Can Dallas get quarterback Dak Prescott to the edges? I really like the idea of Cowboys offensive coordinator Kellen Moore scheming more play-action and boot concepts. This season, including last week’s wild-card game, San Francisco has allowed 8.1 yard per attempt on play-action throws and 7.9 yards per attempt on boot play-action. Both rank 22nd in the league. Read more at ESPN+.

What to know for officiating: Referee Bill Vinovich’s regular-season crew continued its long streak of throwing the fewest flags in the NFL this season, averaging 10.9 per game. That trend has typically extended into the postseason as well. It will be tested in this game, though. The Cowboys committed the NFL’s sixth-most penalties this season (125), while the 49ers were close behind with 120 flags. Vinovich threw four flags for roughing the passer, and only one referee (John Hussey) threw fewer. — Seifert

Betting nugget: Dallas has lost seven straight playoff games as an underdog (2-5 ATS). Its last playoff upset was in the 1992 conference championship game against San Francisco (+4). And while Dallas is 13-5 ATS on the road since the start of last season, San Francisco is 8-1 ATS as a home favorite this season (8-2 ATS overall at home) with six straight covers. Read more at ESPN+.

January 20, 2023 NFL Comments Off on What to know for NFL divisional round games: Score picks, bold predictions and key matchups
NFL News