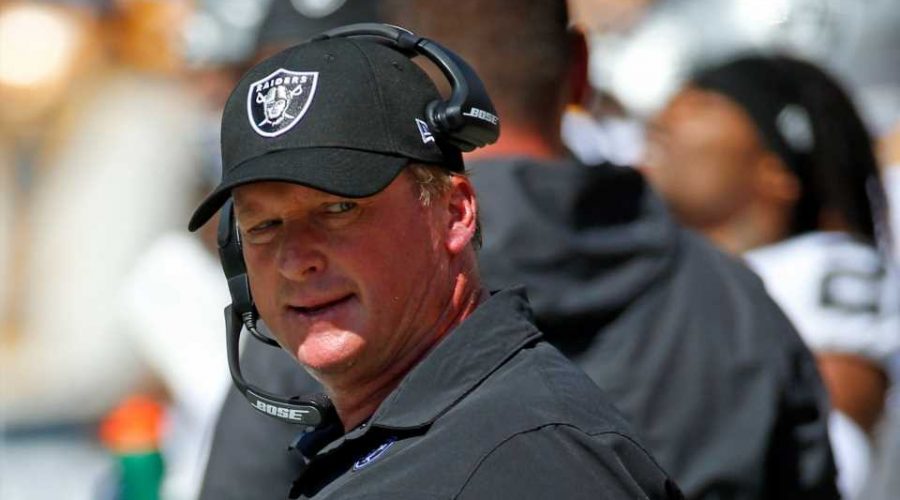 As it turns out, what happens in Vegas doesn’t always stay there.

When the Raiders take the field this weekend vs. the Bengals, Rich Bisaccia will be the bench boss for Las Vegas in the franchise’s first playoff appearance since 2016 — not Jon Gruden.

Gruden’s unceremonious exit proved to be one of the first major points of adversity for the Raiders squad this year, which ultimately ended to a winning season and a super wild-card weekend showdown with Cincinnati.

When Gruden signed his 10-year, $100 million pact to return to the Raiders’ sidelines, few thought it would end with emails. Here’s what happened:

What happened to Jon Gruden?

Jon Gruden’s Raiders tenure came to an abrupt end in October, when homophobic, sexist, transphobic and otherwise offensive emails of his were unearthed, leading to his resignation.

As detailed in a report by the New York Times, the emails were sent to former Washington Football Team president Bruce Allen between 2010 and 2018, the season when Gruden returned to the Raiders on a mega-contract. In the emails, Gruden attacked commissioner Roger Goodell, NFLPA president DeMaurice Smith and the league at large.

The Times reported that Gruden called the commissioner a “f—” and a “clueless anti football p—.” Gruden also attacked Goodell over his “pressuring” of the Rams to draft player Michael Sam, the NFL’s first openly gay player, as well as throwing prejudiced barbs at NFLPA president DeMaurice Smith.

Soon after the emails were leaked, Gruden signed his resignation papers, but his story with the NFL didn’t end there. Not too long after his ouster, Gruden filed a lawsuit against the NFL and Goodell, citing that NFL essentially forced Gruden into resigning after it appeared he would stay on the Raiders sidelines.

“Defendants’ treatment of Gruden was a Soviet-style character assassination,” Gruden’s attorneys state in the lawsuit. “There was no warning and no process. Defendants held the emails for months until they were leaked to the national media in the middle of the Raiders’ season in order to cause maximum damage to Gruden.”

The NFL responded, calling the claims baseless and the league plans to “vigorously defend against these claims.”

In 2018, Gruden returned to the Raiders after signing a 10-year, $100 million contract, but it’s unclear how much of the remaining money he’ll see.

While Gruden resigning means that he forfeits the remainder of the money on his contract, reports indicated that Gruden and Las Vegas were working on a settlement package for the roughly $60 million remaining on the contract.

It’s unclear how much the Raiders and Gruden would eventually settle on, if the two parties did settle at all.