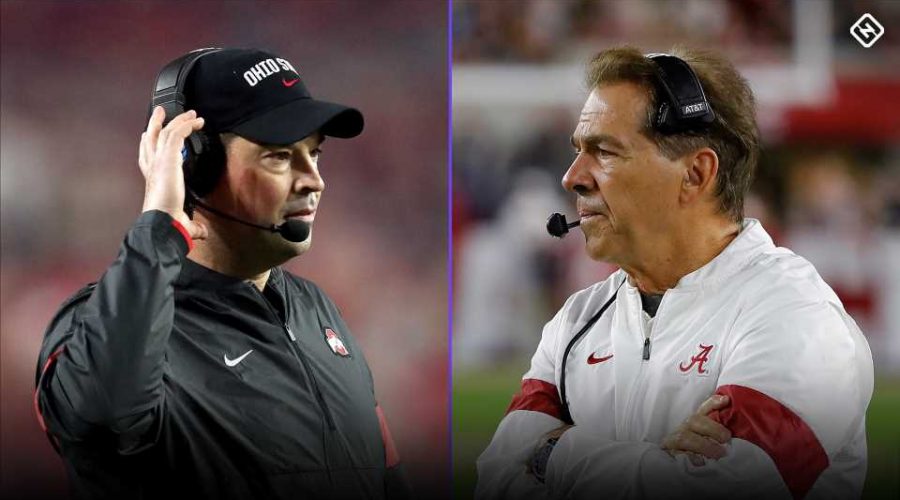 Only one game remains in the 2020 college football season: No. 1 Alabama vs. No. 3 Ohio State.

It’s only fitting that, in this upside season affected by the COVID-19 pandemic, the Rose Bowl champion Crimson Tide and Sugar Bowl champion Buckeyes should meet in Miami to decides the sport’s national champion. Apart from the peculiarities of Monday’s meeting, however, there are plenty of storylines to watch in the final game of the year.

First and foremost is the reported COVID-19 outbreak in Ohio State’s locker room. The Buckeyes were already without 16 players in their Sugar Bowl romp over the Tigers, but it’s uncertain how many — if any — players must miss the game against Alabama. That’s assuming, of course, the game isn’t postponed to a later date.

Otherwise, it seems as if the big question regarding Monday’s national title game is which of the two offenses can outperform the other. Justin Fields is sporting what appears to be bruised ribs, at least, from a targeting hit by Clemson linebacker James Skalski. The advent of Trey Sermon, who has a combined 589 yards from scrimmage in his last two outings, certainly helps the Buckeyes’ title game hopes.

Then there’s Alabama, whose offense features a potent triumvirate of quarterback Mac Jones, receiver DeVonta Smith and running back Najee Harris. That combo is fearsome enough as is, but there are rumors receiver Jaylen Waddle, who broke his ankle in the Tennessee game, can return to play as well.

With that, here’s everything you need to watch Alabama vs. Ohio State in the College Football Playoff championship game, including TV channel, kickoff time, location and updated betting odds.

What channel is Alabama vs. Ohio State on tonight?

The College Football Playoff national championship between Alabama and Ohio State will be broadcast nationally on ESPN. Chris Fowler and Kirk Herbstreit will serve as play-by-play announcer and analyst, respectively, while Maria Taylor will work the sideline. Holly Rowe, who was also scheduled to work the game, is no longer able after testing positive for COVID-19.

In addition to the main broadcast on ESPN, viewers have a few alternative options to watch the CFP championship game via ESPN’s “Megacast.”

What time does the college football championship game start?

The College Football Playoff national championship between Alabama and Ohio State is scheduled to kick off at 8 p.m. ET on Monday, Jan. 11.

Where is the CFP national championship 2020?

Below are all the future dates and sites for ensuing CFP national title games:

Alabama opened as a seven-point favorite over Ohio State, with the spread growing to an eight-point advantage for the Tide just a few days before the game. This comes after No. 3 Ohio State scored an outright upset of Clemson (-7) in the Sugar Bowl semifinal game. Alabama, a 19-point favorite over Notre Dame in the Rose Bowl, failed to cover in a 31-14 win.

January 11, 2021 NFL Comments Off on What channel is Alabama vs. Ohio State on tonight? Time, TV schedule for 2021 college football championship
NFL News