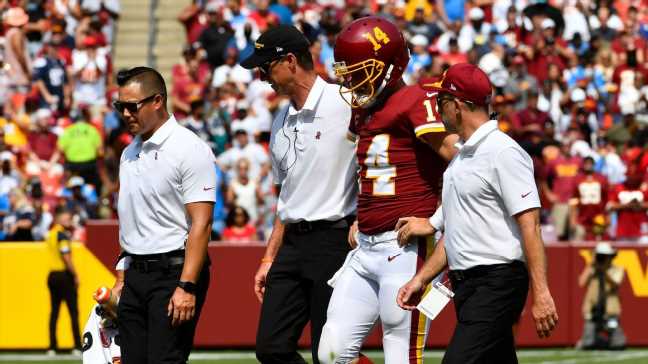 Taylor Heinicke, a fan favorite after a strong showing in a playoff loss to Tampa Bay, replaced Fitzpatrick. He led a field goal drive at the end of the first half, aided by a 15-yard roughing the passer penalty.

Midway through the second quarter, Fitzpatrick dropped back to pass but was leveled by linebacker Uchenna Nwosu, who beat left tackle Charles Leno Jr. to the inside. Fitzpatrick lay on the ground for a minute then got up briefly before lying back down. As he was helped off the field, he stopped to talk to Heinicke before patting him on the helmet and going to the locker room.

Washington signed Fitzpatrick during the offseason to provide a veteran boost at quarterback. The team raved about his wisdom and leadership, but he struggled against the Chargers’ defense, completing 3 of 6 passes for 13 yards. He became Washington’s 31st starting quarterback since the franchise won the Super Bowl after the 1991 season.

Washington signed Heinicke late last season. He was a student at Old Dominion when the team called and had not started an NFL game in two years.

September 12, 2021 NFL Comments Off on WFT’s Fitzpatrick out with hip injury; Heinicke in
NFL News