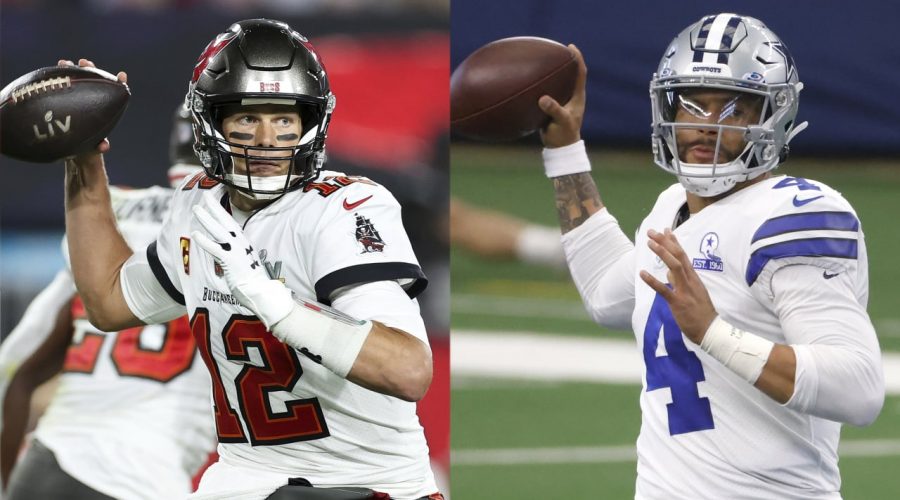 Gregg Rosenthal will predict every game of the 2021 NFL season, and he promises to get them all right. Check out the Week 1 picks below.

The lines below provided by Caesars are current as of 11 a.m. ET on Thursday, Sept. 9 unless otherwise noted below.

The Cowboys’ defense is trying out a new defensive tackle duo, a new starting linebacker group, a new scheme. The Bucs are not the Week 1 opponent against whom you want to be trying anything new. Tom Brady spent the first three months of last season working out the kinks in Bruce Arians’ offense so he could soar into the playoffs and now glides into a new season with unprecedented continuity and depth. Brady could probably drop 30 on this Dallas defense even if he was only allowed to use the Bucs’ backup skill position players.

The Texans’ quantity-over-quality approach to free agency positioned them with better roster depth than a few teams — like the Jaguars. Houston is set to play some close games with long drives, a lot of running and minimal turnovers from Tyrod Taylor. This might not lead to scintillating action, but it could lead to more wins than expected. (Like this one at home against another new coaching staff trying to find its way.)

WFT’s front four will provide an immediate litmus test for a Chargers offensive line that looks much improved on paper but has yet to play meaningful snaps together. Los Angeles has the superior quarterback here, but the gap isn’t as great as it would have been last year, with Ryan Fitzpatrick now in Washington and new offensive coordinator Joe Lombardi adding some unpredictability on the Chargers’ side. In a battle of evenly matched teams with a wide variance of 2021 outcomes (6-12 wins?), I lean slightly to a home team with an advantage in continuity.

This is not the same Colts offensive line. Left tackle Eric Fisher is trying to return from an Achilles tear and All-Pro guard Quenton Nelson has had back and foot injuries. This is also not the same Seahawks defensive line. They have the depth inside and out to rush the passer — and to test whether Carson Wentz can get rid of the ball more quickly than he did in Philadelphia. A Wentz whose mobility might be reduced coming off his own foot injury is not a Wentz I’m picking to beat quality competition.

There are a lot of questions here. Will Sam Darnold look more comfortable than he did in the preseason? Will Jets coach Robert Saleh be able to cover up a talent-poor secondary? Will the pessimistic reports about the Jets’ offensive line in August translate to trouble against a sneaky good pass rush led by Brian Burns? Should any team starting Cam Erving at left tackle be as heavily favored as the Panthers are here? (My answer to the last one: No.)

Sometimes the preseason says plenty. These were two of the worst offenses all August, from the games to the practice reports. Joe Burrow’s timing, accuracy and confidence all figure to be impacted by his time off recovering from an ACL tear. While the Bengals’ offensive line issues have been somewhat overblown — I’d take them over the Vikings’ line! — this is a brutal Week 1 matchup against a Minnesota front with four excellent starters, none of whom were around a year ago. Cincinnati’s defense could also be sneaky good and match up well, so I feel more confident in this being a low-scoring affair than I do about the Vikings covering three points on the road.

﻿﻿﻿﻿Both teams had a considerable amount of personnel turnover this offseason, but the Titans had the stronger base to start with. Just writing the names of A.J. Brown, Derrick Henry and Julio Jones on the same depth chart is a microaggression. Tennessee’s defense also has a chance to clear the 2020 group’s low bar. The re-formed secondary of high picks (Kristian Fulton, Caleb Farley and Elijah Molden) and vets (Kevin Byard, Janoris Jenkins) could match up well enough with an Arizona passing game that is counting a lot on veteran receiver A.J. Green and rookie Rondale Moore.

﻿﻿﻿It doesn’t feel right that the 49ers are a 7.5-point road favorite against a team that lost only one more game than they did a year ago. Then again, it doesn’t feel right to be one of five NFL.com analysts to pick the 49ers to win it all. There is nary a position group on this 49ers roster that doesn’t look loaded, with the exception of their secondary. The Lions, meanwhile, are in transition most everywhere except the offensive line. While being great up front will make Dan Campbell happy, you still need playmakers on both sides of the ball in the year 2021.

The Bills’ young pass rush answered some questions in August with the emergence of rookie Gregory Rousseau and A.J. Epenesa. Josh Allen looks ready to mount an MVP campaign. Yet I still think Pittsburgh can keep this game close because NFL games between good teams usually stay close, and the Steelers’ talent drain has been overstated; their depth of weaponry and strong defensive front seven should not be underestimated. An underestimated Mike Tomlin traditionally does his best work.

This is my sneaky fun game of the week. Both teams are beautiful mysteries that have players I am dying to see: Jalen Hurts, DeVonta Smith, Kyle Pitts … fantasy league winner Mike Davis. While I give the coaching combination of Arthur Smith and Dean Pees an edge for Atlanta, the Eagles still have the bones of a winning team up front on both sides of the ball. The Falcons, on the other hand, have an incredibly undermanned defense and their usual pass protection questions. Believe in the big guys!

﻿﻿The Chiefs fatigue that apparently overtook the football cognoscenti this offseason should end sometime around Andy Reid’s fourth play call. Few coaches come out of the gates swinging bigger than Reid, who is trying to take a page from Kevin Stefanski’s playbook with a road-grading offensive line. The Browns are more talented overall, have a higher ceiling on defense and more weapons on offense. Expect an even better game than last year’s tense Divisional Round matchup.

﻿﻿﻿It’s unfortunate for the Saints that recent trade acquisition Bradley Roby won’t suit up for this game. It wouldn’t surprise me if the Saints, forced to host the Packers in Jacksonville because of Hurricane Ida, play with a higher purpose like the Jim Haslett Saints of 2005 did in their opener after Hurricane Katrina. But at some point, the matchups on the outside are too tilted. Ken Crawley, rookie Paulson Adebo and recent pickup Desmond Trufant are going to be stuck in one-on-one matchups, with Aaron Rodgers choosing one off the menu. The Saints have the pass rush and the quarterback to cover the spread, but I can’t quite pick a neutral site upset.

﻿﻿The Giants started as the favorite in this game before everyone watched the preseason. The last few weeks could serve as a trap of sorts, with key Giants like Kenny Golladay, Saquon Barkley and Kadarius Toney getting healthier. A hobbled Bradley Chubb (ankle) could help give Daniel Jones more time to operate, and I’m convinced the G-Men will field a solid defense with creative play-caller Patrick Graham able to experiment with a good-looking secondary. As much as I like these Broncos, both teams lean conservative offensively. This game has low-scoring rock fight written all over it.

﻿﻿It’s easy to forget the Dolphins won six of the nine games Tua Tagovailoa started last year, including a 22-12 win over the Patriots in Week 15. I believe both rosters are considerably stronger than they were back then. Miami’s offense should be more explosive, and Tua looks more comfortable. New England’s defense is set to rebound, and Mac Jones can balance the team’s offense. The Patriots get the Week 1 nod because they’re at home and they are more likely to protect their young quarterback.

﻿﻿Two road wild-card teams from a year ago should not look like such a Week 1 mismatch. The Bears’ defensive talent has eroded over the last few years, so it’s hard to see what makes them special on either side of the ball. The Rams’ receivers will find opportunities against a thin Bears secondary, but don’t be stunned if it takes L.A.’s stars a few quarters to warm up after sitting all preseason.

It’s surprising to see the Ravens as this big a road favorite after such a brutal month. It’s an even bigger surprise to see so many total points expected between two teams looking to grind the football into dust. The Ravens’ passing attack has had very few reps together this year, while the Raiders’ defense almost can’t help but improve as a result of their personnel additions and change to coordinator Gus Bradley. That all sets up for a tight, low-scoring game where I want to pick the Raiders straight up but don’t have the courage.