Washington confirmed in a statement Wednesday that it is ending its relationship with the Original Americans Foundation, which shares a legal address with the team and has long relied on it for funding.

The move comes four months after Washington retired its previous team name, which had been criticized as insensitive or racist.

"As a part of our evolution into a franchise of the future, the Washington Football Team’s new leadership is reviewing our philanthropic strategy," the team said in its statement.  "As part of this review, the Washington Football Team will focus its philanthropic and charitable work through its own foundation, and will no longer make contributions to the Original Americans Foundation."

While the Original Americans Foundation is still technically active, according to state records, the team's decision effectively leaves it without funding. 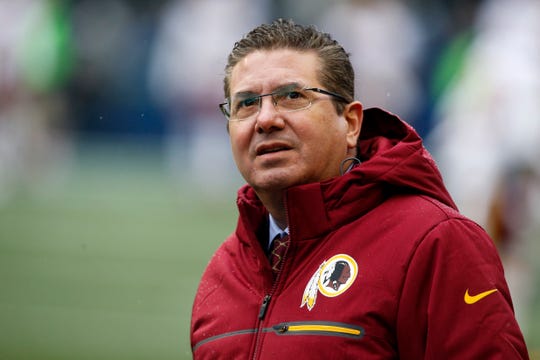 According to an audited financial statement obtained by USA TODAY Sports in July, the foundation reported $528,000 in revenue during the fiscal year ending Feb. 28, 2019 — the most recent year for which records are publicly available. Of that amount, $520,000 came directly from the team.

The foundation had also completely stopped giving. According to the financial statement, it distributed $0 in grants to Native American causes during that same fiscal year.

The Washington Post first reported the team's move Wednesday as part of its story about harassment allegations that were levied in 2014 against the foundation's executive director, Gary Edwards. Edwards declined comment to The Post.

Snyder announced the creation of the Original Americans Foundation with bombast in 2014 amid ongoing criticism of the team name. He touted the creation of the nonprofit as a sign of his commitment to helping Native American communities, a way of providing "meaningful and measurable resources" and creating "genuine opportunities."

Tax records show the foundation distributed $3.7 million to Native American causes in its first year of existence, but only a total of roughly $2.5 million in the four years thereafter — including $0 in the fiscal year that covered most of 2018.