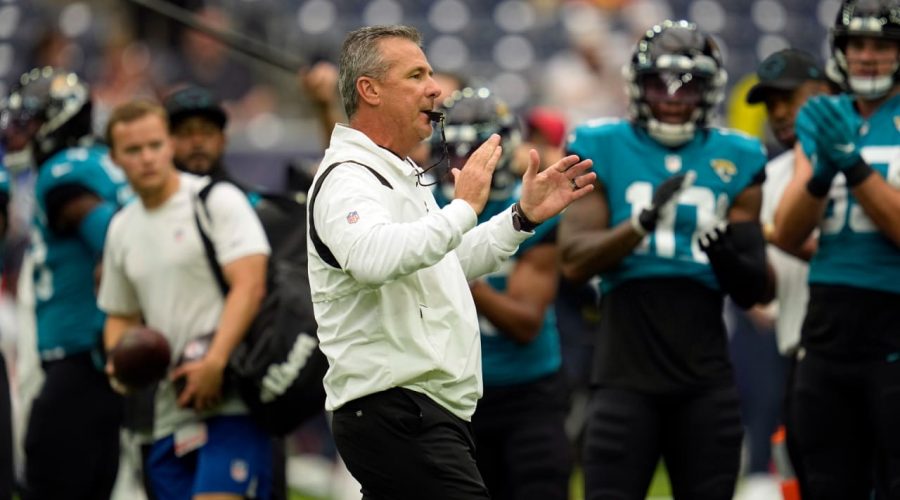 The Urban Meyer era in Jacksonville got off to a poor start as the Jaguars fell 37-21 in a mistake-filled opener to the Houston Texans.

“I don’t really know that word [shell-shocked] other than we’ve all got our a– kicked before,” Meyer said, via ESPN. “Let’s tighten up and go. I believe in that team. I believe in our staff. Come back to work. Going to earn your captain’s stripes and leadership stripes as a coach and leaders on the team. But I believe in those guys.”

The Jags got down big, trailing 34-7 late in the third quarter before a couple of garbage-time scores made it more respectable. Trailing 27-7 at halftime, the 20-point halftime deficit was the largest by a Meyer-coached team since Florida trailed Alabama 24-3 at the half on Oct. 2, 2010, per NFL Research.

Jacksonville botched seemingly everything in the sloppiest of sloppy affairs for the road squad. They got tagged with 10 penalties, including 12 men in the huddle.

“It’s inexcusable the things that need to be fixed,” Meyer said. “Three preseason games you’d think we’d have that fixed, so that’s something that we’re going to … I would guesstimate you would not see that again. That’s inexcusable.”

The defense was a sieve, unable to stop the Texans ground game and allowed receivers to dance free. The offense was a slog, with rookie Trevor Lawrence struggling out of the gate, including the first three-INT game of his entire life.

“I know I’m going to respond well. I’m made of the right stuff, so I don’t have any doubt about that,” Lawrence said. “But it is frustrating, and I hate losing. Hate losing. So, we’re going to get better, but that’s all you can do is watch the tape, learn from it, get better, move on.

“We’ve just got to stick together. That’s the main thing. That’s kind of in the past, that’s over, it is what it is. We’ve got to move on to next week and stick together.”

It’s not new for a rookie QB selected with the top pick in the draft to struggle in their first outing. Lawrence became the 14th consecutive QB drafted No. 1 overall to fail to win his first start (﻿Kyler Murray﻿ tied his first start). The last QB to win his debut after being selected No. 1 was Houston’s David Carr in Week 1, 2002 versus the Cowboys.

Teams usually have the No. 1 pick because they’re in bad shape overall. Sunday showed that the Jags have even more work to do than perhaps Meyer thought when taking his first NFL job. Top-down, it was ugly for the Jags Week 1.

September 13, 2021 NFL Comments Off on Urban Meyer on blowout loss to Houston: 'We've all got our (expletive) kicked before'
NFL News